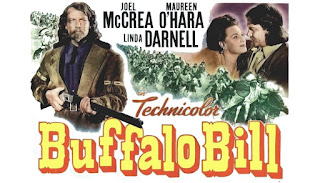 BUFFALO BILL is a 1944 film produced by 20th Century Fox and directed by the vastly underappreciated William Wellman. The movie purports to be a biography of the famous William Cody, a man who was a legend in his own time. I say "purports" because the end result is about as realistic as the average GREEN ACRES episode.

When we are introduced to Buffalo Bill at the beginning of the story, he has already spent most of his life being a scout and dealing with native tribes in the Old West, and he looks around 40 years old. Bill (Joel McCrea) saves a traveling party from an Indian ambush, and among the group are a U.S. Senator and his lovely daughter (Maureen O'Hara, looking gorgeous as always in Technicolor). Bill falls in love with Maureen at first sight (who wouldn't?), but their relationship is affected by an uprising by various tribes, and Cody's disagreements with the military authorities on how to handle the situation. After taking part in a large battle between the U.S. Cavalry and a tribal confederation, Cody becomes a hero, and his exploits are extensively written about by dime novelist Ned Buntline (Thomas Mitchell). Cody goes back East to Washington and tries to reunite with his now-estranged wife, but his outspoken views on the Native American situation make him unpopular. Cody is reduced to working in a sideshow act, but it is there that he gets the idea for a grand Wild West show, and he becomes a worldwide hero once again.

It's hard to believe that the man who directed one of the darkest Westerns ever made, THE OX-BOW INCIDENT, also made this picture. Then again, maybe Wellman should deserve some credit for being able to turn out two such totally different films in the same genre. BUFFALO BILL is classic Hollywood myth-making--there's not much to Cody's character except that he is soft-spoken, straightforward, and determined in his convictions. That is essentially the type of role Joel McCrea played his entire acting career, and while he fits the bill here, at least for this version of Buffalo Bill, he doesn't have the flamboyance one would expect of the world's most famous Wild West showman. (McCrea also appears decidely uncomfortable with long hair and a goatee.)

Wellman apparently hated the script, but he still tried to bring some historical perspective to the story. For a film made released in 1944, it has a rather modern viewpoint when it comes to Native Americans. Time and time again Bill goes out of his way to declare that it is the whites who have caused all the trouble on the frontier, and that Indians should be treated with the same respect the U.S. Government gives to foreign diplomats. There's also a subplot about how when Cody goes to Washington D.C. and ticks off numerous politicians, he is attacked as lying about his escapades out West--was this Wellman's subtle way of letting the audience know that some historians consider the real Cody to be something of a phony?

Maureen O'Hara doesn't get much of a chance to use her legendary on-screen fiery attitude--here she's basically the dutiful wife. Linda Darnell's role in this picture is rather puzzling. She plays a young Native American woman who is intelligent enough to teach white children. She appears to have a crush on Buffalo Bill, and, considering she is third-billed, one expects her to be set up as a rival to Maureen O'Hara...but this never really develops, and Darnell, as in most of her films, comes to a bad end. One has to wonder if some of Darnell's scenes were cut. (Darnell and O'Hara do get to share a scene together, which gives the viewer a chance to see two of the most beautiful women in cinema history at the very same time.)

Like most movies made during the Golden Age of Hollywood, there's plenty of fine supporting talent on hand, such as Thomas Mitchell and Edgar Buchanan. Anthony Quinn steals the show as a noble native American warrior--honestly he might have made a better Buffalo Bill than McCrea.

The large Cavalry-Indian battle I referred to is by far the movie's main highlight. Despite having such a colorful character as the main subject, the film doesn't have a lot of action in it. There's way too many attempts at light humor which just seem silly. Still, Wellman keeps things moving along, and even though he wasn't all that happy with the project, he made it as entertaining as it could possibly be. Just don't expect a "warts and all" version of Buffalo Bill's life--not when at the end a kid with crutches says, "AND GOD BLESS YOU, BUFFALO BILL!!!"
Posted by Dan Day, Jr. at 9:56 AM