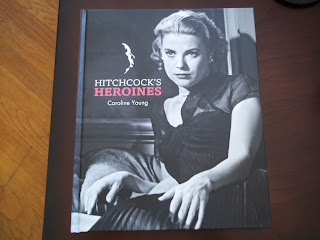 Probably no other film director has been the subject of more books than Alfred Hitchcock. I'd venture that the number of volumes concerning the man runs into the hundreds, and dozens more seem to crop up each year. One has to wonder about these new Hitchcock tomes--what more can one say about him and his films that hasn't already been said? What new angles are there left to explore?

HITCHCOCK'S HEROINES, written by Caroline Young and published by Insight Editions, thankfully is a worthy addition to the Alfred Hitchcock library. The book is a well-produced coffee table sized exploration on the leading ladies of a number of Hitchcock's films, their personal relationships with the director, and their characters.

HITCHCOCK'S HEROINES examines 23 films and main female stars of each, starting with the 1927 silent THE LODGER and ending with 1972's FRENZY. Because of this format a few actresses are showcased in more than one chapter--Ingrid Bergman gets two chapters, Grace Kelly gets three, and Tippi Hedren gets two. The book goes beyond the usual ladies associated with Hitchcock--performers such as June Howard-Tripp, Anny Ondra, and Nova Pilbeam are also featured.

Each chapter gives a thorough analysis of the leading lady for the film selected--why she was cast, how she interpreted her role, and what her relationship with Hitchcock was like. The wardrobes for the ladies in each particular film are also examined, as Hitchcock himself had very exact instructions for what the actresses in his movies should be wearing.

One of the main themes of the book is Hitchcock's quixotic personality when it came to relating to women. The author makes the case that Hitchcock was very respectful toward major stars who were not intimidated by him, such as Carole Lombard and Ingrid Bergman. However, this work does not shy away from the accusations made toward Hitchcock by women such as Tippi Hedren and Vera Miles. The charge that Hitchcock's work had a misogynistic streak running through it is also discussed.

What really makes the book special in my opinion are the number of high-quality photographs reproduced in it, with many of them being an entire page. Whatever you may think of Hitchcock's personal behavior, the man did have an eye for beauty, and he knew how to present that beauty in visual and dramatic ways. The photos in this book make that abundantly clear.

The fact that HITCHCOCK'S HEROINES was written by a woman is a distinct plus, in that it gives a refreshing spin on a subject that has been discussed over and over again. While reading this book one is reminded of how vitally important the leading ladies of Hitchcock's films were to him and his work. I already own a number of books written about Alfred Hitchcock and his movies, and I'm glad I added this one to the list.