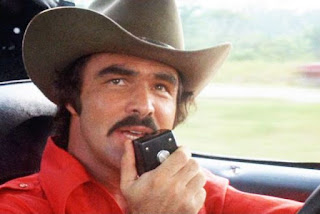 When I was a pre-teenager, my parents almost never went to the movies. Their philosophy was, "It'll be shown on TV eventually." I had to beg them over and over again just to get them to take me to any of the Star Wars films. But for SMOKEY AND THE BANDIT, they made an exception. My entire family made a special trip to the drive-in (not only did my parents not like going to movies, they didn't even like going to movie theaters) in the summer of 1977 to see it. (Remember, SMOKEY AND THE BANDIT was rated PG, so it was considered "safe" for my younger brother and me to go along.)

The main reason they went to see this film was Burt Reynolds. The man was a huge star in the 1970s, especially to lower-middle class working people like my parents. Movies like DELIVERANCE, GATOR, and THE LONGEST YARD made Reynolds quite popular in flyover country. To many Americans back then Reynolds seemed like one of them. He may have been a movie star, but he still seemed like an ordinary guy who had fun with his success and didn't come off as elitist or condescending. He didn't appear in critically-acclaimed films, but he starred in titles regular folks enjoyed and wanted to see.

Reynolds also had a huge off-screen persona back in the 70s and early 80s. His various affairs and escapades constantly got him into the tabloids or magazines like PEOPLE or US (about the only type of literature my parents ever read). He also made several appearances on THE TONIGHT SHOW with Johnny Carson, and don't underestimate how that helped Reynolds' popularity--at the time Carson was far more influential than all the present-day late night hosts put together.

I honestly believe that in some ways Burt Reynolds was a latter-day Clark Gable. I realize that what I just wrote might cause some of you to do a spit take, but let me explain. Both men had a cocky self-assurance on the screen, and both men were excellent at comic timing. Both men were also extremely attractive to women, and they knew it. They also spent a majority of their acting careers playing narcissistic jerks--but they each had the innate ability to make such characters seem palatable to a mass audience. That type of charisma and magnetism can't be taught in any acting class--you either have it or you don't. Burt Reynolds was like the cool kid in high school everybody wanted to hang around with.

Reynolds wasn't just admired by adults--kids (like myself) appreciated him as well. When the youngsters of late 70s America weren't pretending to be Luke Skywalker or Han Solo, they wanted to be the Bandit or Hooper. After we saw SMOKEY AND THE BANDIT I told my Dad I wanted my very first car to be a Pontiac Trans Am--needless to say I never got it.

Reynolds wound up riding the country-action comedy train for far too long, and his tabloid lifestyle eventually caught up with him, to the delight of his more "sophisticated" critics. He made a comeback in the 1990s with the TV show EVENING SHADE and his role in BOOGIE NIGHTS. Reynolds had directed a number of the films and TV shows he appeared in, but he wasn't able to manage his career as successfully as his friend and contemporary Clint Eastwood.

Burt Reynolds should be remembered as a true movie star who didn't take himself seriously and entertained millions of people. He had, and always will have, a major impact on pop culture.
Posted by Dan Day, Jr. at 11:01 AM