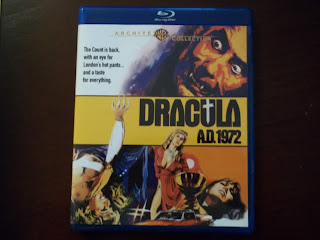 With DRACULA A.D. 1972, Hammer Films took the Count into the modern age. It was a decision that remains controversial to this day. There are many folks who can't stand DRACULA A.D. 1972--I am most certainly not among them. I happen to think it's an entertaining film, with two fantastic confrontations between Christopher Lee's Dracula and Peter Cushing's Dr. Van Helsing (technically two Van Helsings--one in 1872 and a ancestor in 1972). I even believe that the first fight between Dracula and Van Helsing--the one that begins A.D. 1972--is one of the best Hammer film sequences of all time.

Some have complained that Lee's Dracula spends all of his brief screen time inside a deconsecrated church, but I think having him out and about in the London presented here wouldn't have worked too well. Besides, the mere appearance of Lee in his Dracula getup is more than enough. Peter Cushing as always brings authority and stability to the tale--no matter how many times I have seen him go off on one of his "I'm going to explain vampires to you" lectures, he still amazes me with how effortless he does it, and how realistic he makes it sound.

Cushing & Lee are the true foundation on which this movie is built, but let's give some credit to the younger cast (despite some of the goofy dialogue they have to utter). Stephanie Beacham as Van Helsing's daughter turns what could have been just another ditzy modern horror heroine role into a young woman that actually has some emotional depth. She's also quite gorgeous here, and along with Caroline Munro, Marsha Hunt, and Janet Key, the ladies form one of the best single film collections of Hammer Glamour. Christopher Neame as Johnny Alucard just about steals the film from Cushing & Lee. For those of you raising your eyebrows at that statement, let me unequivocally declare that Neame gives one of the best supporting performances in any Hammer horror film. Neame lets loose and gives it his all, and I agree with his approach here.

Director Alan Gibson does a very good job juggling the modern and Gothic elements, and I even appreciate Mike Vickers' funky music score--as a matter of fact, I'm listening to it on vinyl even as I write this post! DRACULA A.D. 1972 does have a few silly elements to it, but all in all the movie remains one of my great guilty pleasures.

Warner's Blu-ray of DRACULA A.D. 1972 is the best I've ever seen the movie look. Usually A.D. 1972 has had a dark, murky look to it, due to the many day-for-night scenes. On this Blu-ray the entire movie is much clearer and the visual presentation is more defined. This bodes well for any future Hammer releases that the Warner Archive have in mind.

Sadly the only extra is an original trailer. Any Hammer movie on home video deserves some supplementary material--hopefully Warner will consider this point.

Many Hammer fans such as myself were anticipating that someday the Warner Archive would come out with a follow-up to their "Horror Classics" collection of a few years ago (which was subtitled Volume One, after all). That may not happen, but the fact that these two Hammer Dracula releases have gotten so much attention on the internet might cause the company to put out other Hammer product. DRACULA A.D. 1972 is a groovy start--and even if you don't enjoy the film as much as I do, how can you turn down the chance to see Cushing & Lee battle each other to the death twice??
Posted by Dan Day, Jr. at 11:53 AM