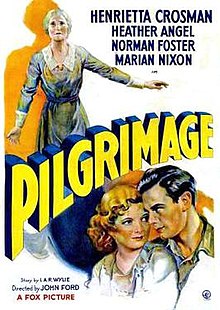 My last post concerned a DVD I bought containing two early John Ford sound films: BORN RECKLESS and PILGRIMAGE. I covered BORN RECKLESS in that post, and today I will be reviewing PILGRIMAGE.

Film historian and Ford biographer Joseph McBride calls PILGRIMAGE the director's first great film. It has very little in common with Ford's more esteemed classics. Most of PILGRIMAGE was filmed on indoor sets, and the usual Ford themes of family and American traditions are put into question here. PILGRIMAGE isn't a male-dominated action story--it is a domestic drama centered around a stubborn, independent elderly woman named Hannah Jessop (Henrietta Crosman).

Hannah is a widow who lives on a small farm in Arkansas during the early 20th Century. She dotes obsessively over her teenage son Jim (Norman Foster). Jim is bored by farm life, and he wants to go off and join America's involvement in World War I. Hannah is totally against the idea--she doesn't want Jim to ever leave the farm. She's also totally against Jim's romance with a neighbor girl (Marian Nixon). Hannah is so determined to break up the relationship she decides to allow Jim to be drafted--but Jim's girlfriend is now pregnant. Jim is killed in action, and in the ensuing years Hannah has nothing to do with her grandson or his mother. In 1928 a government representative offers Hannah the chance to go on a trip with other Gold Star Mothers to visit their sons' resting places in France. At first, the old woman wants nothing to do with the idea--but she relents, and during the journey the woman realizes the true consequences of her actions.

Like much of Ford's work, PILGRIMAGE is filled with many sentimental and moving moments. But there's also a dark overtone to the story. The Jessop farm is an expressionistic set that almost seems haunted--you can't blame Jim from wanting to get away from the place. The WWI sequence is impressively staged but very short--the abruptness of it is almost as shocking as Jim being buried by a collapsing trench. A very striking scene shows the Gold Star Mothers as a group boarding the ocean liner that will take them to France, while being saluted by the crowd looking on. Ford was a master of such scenes, and you can't help but be moved when at the climax Hannah comes upon her son's grave, and then eventually makes peace with his family.

There is also a fair amount of light humor in PILGRIMAGE--the movie would be very depressing if there wasn't. Ford pokes a bit of fun around Hannah's Arkansas community, and he makes great use out of the woman's fish-out-of-water experience at being in France. The Gold Star Mothers are individualized--the story goes out of its way to show that they come from all sorts of backgrounds and ethnic groups--and they get some humorous moments as well. But the movie still treats them reverently, and Ford's respect for the American military is very obvious.

BORN RECKLESS, which was made in 1930, had a very choppy aspect to it. PILGRIMAGE was made in 1933, and it has far more fluidity and pace--Ford had definitely mastered the sound film by this time. The director doesn't let the film get too talky--he uses a number of close-ups to show the characters' emotions, and a few times the actors even address or look directly at the camera. One of Ford's best attributes as a film maker was his visual staging of scenes, and PILGRIMAGE has several examples of this.

For all of Ford's visual acuity, what really makes PILGRIMAGE work is the performance of Henrietta Crosman as Hannah. The actress does a magnificent job in taking what could be a cliched character and making her multi-dimensional. Hannah is certainly a formidable and sometimes overbearing woman, but Crosman is still able to show the viewer that there's more to her than just angry bullheadedness. During the Gold Star Mothers trip Hannah opens up and starts to interact with others, and while in France she comes across a young American man who is in a similar situation as her son Jim was. This sequence kind of slows down the story--it's very predictable that Hannah will try to help out the young man as a way to confront her own mistakes--but Crosman is able to make it believable. The actress should have been nominated for an Academy Award.

The DVD that contains BORN RECKLESS and PILGRIMAGE features an audio commentary for the latter film by Joseph McBride. As I mentioned before, McBride is a great admirer of the film, and his talk is excellent, going over all the relevant facts about the production and discussing Ford's style and convoluted personality.

I had never seen PILGRIMAGE, and I was quite impressed by it. I'm sure many other film buffs have not seen it either, and I would highly recommend it to anyone who hasn't. It's the type of film that is easy to overlook--it doesn't have any major stars, and there's no major action sequences in it. But it is a highly effective and moving slice of early 20th Century American life. It also has major resonance now since this fall is the 100th anniversary of the climax of World War One.
Posted by Dan Day, Jr. at 8:48 AM