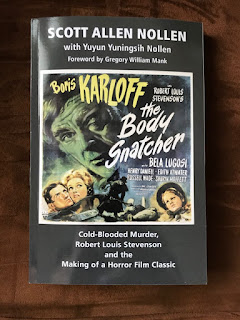 Of all the movie thrillers Val Lewton produced for RKO in the 1940s, THE BODY SNATCHER, based on a story by Robert Louis Stevenson, is by far my favorite. It contains what I feel is one of Boris Karloff's greatest screen performances, along with a beautifully written script and atmospheric direction from Robert Wise. Scott Allen Nollen has written books on both Karloff and Stevenson, and now, with his wife Yuyun Yuningsih Nollen, he creates a volume that analyses THE BODY SNATCHER from a number of aspects.

THE BODY SNATCHER--Cold-Blooded Murder, Robert Louis Stevenson, and the Making of a Horror Film Classic (published by Bear Manor Media) is a wide-ranging book that starts off with a quick chapter detailing the exploits of Burke and Hare, the legendary murderers who inspired Robert Louis Stevenson to write his tale. Nollen then gives a summary of Stevenson's life, and follows up with chapters covering the production of THE BODY SNATCHER film, how the movie was sold and received by audiences and critics at the time, and a scene by scene analysis of the entire movie.

Nollen winds up the book with a chapter on other films based on the Burke and Hare story, while also mentioning other Robert Louis Stevenson adaptations that Boris Karloff and Bela Lugosi were involved in.

As one can surmise, there's plenty of info here, but the authors do not get bogged down in detail, and the book is a delight to read. (If anything, I thought some of the chapters were too short.) The book is filled with photos, including a number of stills from THE BODY SNATCHER that I had never seen before. Greg Mank provides a Foreword.

Obviously, one's enjoyment of this book will depend on how much one appreciates THE BODY SNATCHER film. There's still plenty of things to attract interest here. This is a book that should get the attention of Karloff fans, film buffs, and those who love English Gothic literature and historical legend.

Bear Manor Media has been publishing a number of great movie-related books in the past few years, and the Nollens' THE BODY SNATCHER joins the list.