WHAT A CARVE UP! (AKA NO PLACE LIKE HOMICIDE!) 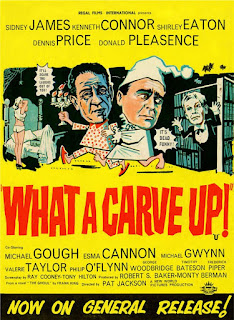 The 1961 film WHAT A CARVE UP! (released in America as NO PLACE LIKE HOMICIDE!) belongs in a small mini-genre of British thriller spoofs made in the early 1960s. The other titles in this group are the 1962 THE OLD DARK HOUSE (made by Hammer, directed by William Castle) and THE HORROR OF IT ALL (directed by Terence Fisher). All three movies involve comedic leads dealing with a weird family living in a spooky remote old manor house. (CARRY ON SCREAMING could be also included in this group, but the plot of that film is very different.)

CARRY ON veterans Sid James and Kenneth Connor star as two friends who travel to a remote estate for the reading of Connor's late uncle's will. As expected, Connor's relatives are strange or suspicious-acting, and people start turning up dead.

This movie does have an impressive cast. Donald Pleasence is the family solicitor, and playing family members are Dennis Price and Hammer veterans George Woodbridge and Michael Gwynn. Shirley Eaton provides the eye candy as the late uncle's nurse, and Michael Gough gets the best role as the butler. Gough is made up to look like Lurch from the Addams Family, and he shambles along with a limp and a zombie-like expression. Adam Faith, who was a English pop star at the time, shows up at the end for a cameo.

One expects some entertainment just from the cast alone, but the script doesn't provide any. The story is made up of the same old dark house cliches most film buffs have seen numerous times. There's sliding panels, bodies appearing (and disappearing) unexpectedly, and characters acting weird just for the sake of it. Kenneth Connor is a cowardly klutz, while Sid James is a bossy smart-aleck. In this film the duo come off like an English Abbott & Costello (although nowhere near as funny or interesting).

Despite all the various CARRY ON connections here, there's very little bawdy humor (the viewer is, however, treated to the sight of Shirley Eaton in her underwear). The "funny" business that is in this movie could easily be found in any episode of the average American TV sitcom made at the time.

WHAT A CARVE UP! was produced by Robert Baker & Monty Berman, and this is one of their decidedly lesser efforts. The director of the film was Pat Jackson, who went on to helm a few episodes of the magnificent TV show THE PRISONER. Here Jackson seems ill at ease with comedy--the gags lack rhythm and pace. (The Three Stooges could have gone through all the situations in this movie in fifteen minutes flat.)

English Gothic fans will want to see WHAT A CARVE UP! just for the cast alone, but the limp material doesn't measure up to the talents involved.