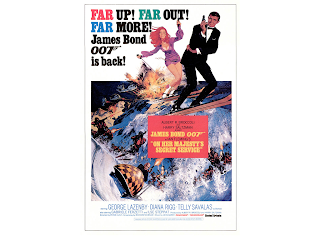 This week marks the 50th anniversary of the debut of the very first James Bond film, DR. NO. Because of this, I have decided to write some Bond blogs--featuring the two least-appreciated 007s, George Lazenby and Timothy Dalton.

It's hard to imagine what it must have been like to have to replace Sean Connery as James Bond back in 1968. At that point in time, Connery was the only actor to have ever played the role in a "official" James Bond movie. James Bond in the 1960s was THE biggest character in all of popular culture. Just consider if say, Daniel Radcliffe had quit playing Harry Potter in the middle of the series. That's what producers Albert Broccoli and Harry Saltzman had to deal with in trying to fill Connery's shoes.

Their choice was a bit unusual, to say the least. Australian George Lazenby wasn't just an unknown actor--he wasn't an actor at all. Lazenby had done some modeling and some commercials, but he had never played a role in any movie whatsoever. He apparently showed enough in his screen tests (especially during the fight scenes) to get the role. What was probably the biggest show business break in history didn't turn out the way Lazenby might have thought it would. Today most people think of Lazenby as a punchline, or a failure. ON HER MAJESTY'S SECRET SERVICE (OHMSS) is considered by some to be one of the worst of the Bond series, mostly due to Lazenby.

But in recent years, OHMSS' reputation has gone up, especially among hard-core Bond fans (in other words, those who have actually read the Ian Fleming novels). George Lazenby has also started to get some credit. What the regular public tend to think is one of the worst Bond movies is in reality one of the best.

OHMSS was one of the last Bond films to be closely adapted from an Ian Fleming novel (that is until 2006's CASINO ROYALE). Just about everything in the book is in the movie--even Bond's romance, and marriage, to Countess Tracy. The usual far-fetched elements of a Bond film are a bit toned down here. There's still plenty of action and stunts (some of the best in the series, in fact). But the over-the-top wildness of the previous YOU ONLY LIVE TWICE is not much in evidence. Even Blofeld's grand scheme to subject various plants and animals to infertility is believable enough.

The film starts out with the typical Bond pre-credits sequence, which introduces us to Lazneby, and gives him the now-classic line, "This never happened to the other fellow." It's here that Bond first encounters Teresa (Tracy) di Vicenzo, played by Diana Rigg.

Tracy is a woman who has "issues". Tracy's father, a European crime boss, thinks Bond is the perfect man to set his daughter straight. Tracy's father agrees to give Bond information on super-villain Ernst Blofeld (Telly Savalas) if Bond romances his daughter.

A major problem some people have with OHMSS is that James Bond really does fall in love. Considering that it's Diana Rigg, you can't blame him. But it works here, because it's LAZENBY playing Bond. If Sean Connery had been in OHMSS, it wouldn't have worked.

I know that sounds like heresy, but let me explain. George Lazenby, of course, is not Sean Connery. Lazenby's Bond doesn't have the arrogance, or the swagger, that Connery's Bond did. Lazenby certainly looks the part, and he's great in the action scenes--but he's kind of...normal. He doesn't have the screen presence that Connery had. When Lazenby's Bond falls for Tracy, you buy into it. Because Lazenby seems more of a "normal" person (if any actor playing James Bond can come off as being "normal") it makes sense that Lazenby would really care for this woman.

Connery's Bond, on the other hand, would never get married (except in the line of duty, as in YOU ONLY LIVE TWICE). Connery would have certainly bedded Tracy, and he would have certainly used her to get information on Blofeld, but then he would have gotten away from her as fast as possible. There's also the fact that if Connery had been in OHMSS, the plot idea of Tracy playing hard-to-get would have looked silly. No woman, even one as screwed up as Tracy, would have been able to hold off Connery.

Another advantage that Lazenby has over Connery is that Lazenby's Bond is one that does not seem indestructible. This makes the action scenes more thrilling. When Lazenby is in a fight scene or being chased, he seems as if he's really in danger. The audience doesn't know this Bond as well as Connery's, so one can't take it for granted that Bond will come out without a scratch. The fight scenes are really where Lazenby comes off best.

There are several other reasons why OHMSS is a great Bond film. The various ski-chases around Blofeld's Swiss Alps compound still hold up today. They've been reworked in several Bond films since. Even though he's bald and he has a pet cat, Telly Savalas is a lot different than the previous Blofeld, Donald Pleasence. Savalas, I think, makes a great Bond villian. Composer John Barry's score is one of the best in the whole Bond series. There isn't a title song, but Barry's OHMSS theme is perfect. Just try listening to it while driving down the highway.

Diana Rigg gives what may be the best female acting performance in any Bond film. Her Tracy is one of those women you just know are going to cause you trouble, but you go after her anyway. Rigg had just reached stardom from her role in the 60s TV hit "The Avengers", and she was probably hired to give the inexperienced Lazenby a strong leading lady. A number of books on the Bond films say that Rigg and Lazenby didn't get along, but they make a very good screen couple. The Bonds of Connery and Roger Moore wouldn't have had the patience to deal with someone like Tracy, but Rigg gives the character enough vulnerability to attract Lazenby's Bond.

Peter Hunt, who directed OHMSS, deserves some praise. Hunt had been an editor on earlier Bond films and he was "promoted" to the director's chair. Obviously, his best work is in the action scenes, but the Tracy-Bond relationship is handled very well. It's unfortunate that Hunt didn't get a chance to direct other Bond films.

OHMSS was not a hit when it was released in 1969. Of course most of the blame was put on George Lazenby's shoulders. Lazenby didn't help matters by announcing he wasn't going to play the role again (the urban legend is that he was fired--he wasn't). If Lazenby had continued playing Bond, he might have grown into the role and been fairly successful at it. He wouldn't have made people forget about Sean Connery, but he could have had a good run as Bond, just like Roger Moore did.

In a way Broccoli & Saltzman put Lazenby in a terrible position. No matter what Lazenby did (and he actually did pretty well under the circumstances), he was never going to out-do Sean Connery. To this day a number of people think of him as a joke. Lazenby continued on as an actor but he never got anywhere near major stardom.

In a way OHMSS shares the same fate as George Lazenby. Even though it's one of the best Bond films, most of the general public see it as a bomb. Hard-core James Bond fans and film buffs know better. ON HER MAJESTY'S SECRET SERVICE may be the last truly great James Bond film.