On August 6, I attended the Flashback Weekend Horror Convention held at the Crown Plaza O'Hare Hotel (the same place that G Fest was held at a couple weeks earlier). Flashback Weekend is more of a "modern" horror movie convention--most of the autograph guests had appeared in thrillers from the last twenty years or so. The one guest I really wanted to meet was British actress Judy Geeson. She was there mainly because of her roles in the Rob Zombie films 31 and THE LORDS OF SALEM, but what was important to me was that she had co-starred with both Peter Cushing and Christopher Lee.

Most Americans will probably remember Judy for her role in TO SIR, WITH LOVE, but she's had a very distinguished and eclectic acting career, working with all time legends such as Joan Crawford and John Wayne, and starring in various TV series in both England and the U.S. (she was a semi-regular in MAD ABOUT YOU). As I was standing at her autograph table, waiting for a chance to talk to her, she walked right up to me, pointed at my trusty Peter Cushing shirt, and said, "I LOVED THAT MAN!!" (Obviously my choice of attire was the right one.)

She went on to tell me plenty of stories about Peter Cushing, assuring me the man really was a special person. I know there are some in the monster fan community who roll their eyes at all the "Peter Cushing was such a great man" stories, but Judy definitely had deep and real feelings for him. Every Cushing co-star I have met--Veronica Carlson, Caroline Munro, Yvonne Monlaur, Valerie Leon, etc...has expressed how much respect and admiration they had for him.

I had to ask Judy about Joan Crawford and John Wayne. Judy co-starred with Crawford in the wild and wooly circus horror film BERSERK, and she told me Crawford was a serious professional, totally dedicated to the task at hand. Judy said that she felt Crawford was having some difficulty not being a young glamour girl anymore, but she did not experience any problems with her personally.

As for the Duke, Judy co-starred with him in the "Tough American cop goes to England" movie BRANNIGAN. Judy got along famously with Wayne--she said he had no star ego whatsoever, and on set he never acted as if he was better that anyone else. She said that she and Wayne kept in touch with each other for a few years. 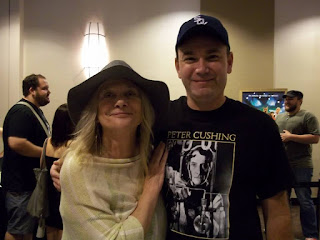 Judy Geeson and I at Flashback Weekend


Judy also co-starred with Christopher Lee in an obscure movie called DIAGNOSIS: MURDER (it's so obscure, even I've never seen it). She said that before filming she had heard stories about Lee being pompous and boring, but she found him to be interesting, and a far warmer person than he is usually given credit for. She also gave me an example of how Lee would practice his golf swing while on the set!

There were plenty of other things about her career that I could have asked her about, but I didn't want to be a pest (if you go to one of these conventions, you certainly don't want to annoy the guests). I could tell, though, that Judy was more than happy to discuss the movie legends that she worked with, and I think she got as big of a kick out of it as I do interacting with her.

I know that there are some who frown on the whole celebrity autograph circuit industry. At the bigger cons it can feel like going through an assembly line--you'll be lucky at some autograph sessions to make eye contact with the artist, let alone have a conversation with them. The great thing about "mid-level" conventions such as Monster Bash, G Fest, and Flashback Weekend is that you will get more of a chance to talk with a certain artist. I don't just get autographs from anybody who has appeared in a movie--there has to be a certain reason for me to get a person's autograph, such as being in a particular film or co-starring with a certain performer. I've never going to get to meet Peter Cushing, or Christopher Lee, or Hollywood legends like Joan Crawford and John Wayne--but in talking to someone like Judy Geeson, I can get a feeling of what those stars were really like. It's one thing to read books and articles about movie history, but it's even better to meet and talk with someone like Judy Geeson who has had such a varied screen career...and find out she's a real sweetheart too. 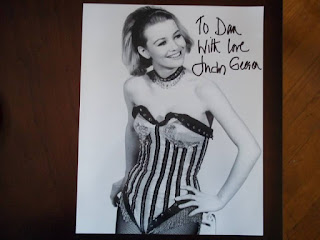