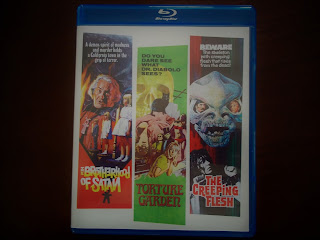 Mill Creek Entertainment has released a Blu-ray triple feature consisting of three horror films from the late 60s-early 70s. Two of the films, TORTURE GARDEN and THE CREEPING FLESH, make sense being bundled together, since they are both British productions and they each star Peter Cushing. The third film, THE BROTHERHOOD OF SATAN, is the odd one out, being a low budget American story about Devil worship.

The three films are all on one disc. Mill Creek names this collection "Psycho Circus", apparently inspired by the fact that TORTURE GARDEN is set in a carnival. Even with that weak link the name doesn't make much sense for the set overall. (PSYCHO CIRCUS, by the way, was the American title of the 1966 Christopher Lee film CIRCUS OF FEAR.) Thankfully, the disc cover is reversible, and the other side showcases promotional art for each movie (see picture above).

TORTURE GARDEN (1967) is one of Amicus Productions' many anthology films. This one is made up of four stories from famed thriller writer Robert Bloch, who penned the screenplay. The first three tales are not all that impressive. They deal with a diabolical cat, a jealous piano (yes, you read that right), and the obvious "secret" on why Hollywood legends never seem to age. The final story, "The Man Who Collected Poe" is by far the best. It has Jack Palance and Peter Cushing as Poe fanatics--with Palance finding out that Cushing has the ultimate Poe collectible. (Cushing has the smaller role, but you do get to see him act drunk.) Director Freddie Francis does what he can visually to jazz up the stories. The framing story has Burgess Meredith as a sideshow exhibitor named Dr. Diabolo, who shows folks their futures by having them examine a statue of Atropos holding the "shears of fate". Other than the last tale, TORTURE GARDEN is a bit underwhelming--except Palance, Cushing, and Meredith, it doesn't have the lineup of guest stars one usually sees in a Amicus anthology.

THE CREEPING FLESH (1972), also directed by Freddie Francis, is the best film in this collection. For whatever reason, it doesn't seem to get the respect it deserves, despite the fact that it is one of the more impressive Peter Cushing & Christopher Lee team-ups. The duo play half-brothers who are rival scientists in 1890s England. Emmanuel Hildern (Cushing) has brought back a strange skeleton from New Guinea, and discovers that the find grows flesh when brought into contact with water. Emmanuel's studies of New Guinea native legends convinces him that the skeleton is the remains of a destructive being, and he tries to create a serum from the creeping flesh that will counteract evil. Unfortunately the serum brings about evil instead of suppressing it, and Emmanuel does not find this out until after he has injected his young daughter (Lorna Heilbron) with it. Emmanuel's wife had died in his half-brother James' (Lee) asylum, and the man fears his daughter will suffer the same fate. Meanwhile, James Hildern has scientific plans of his own, and he believes his half-brother's skeleton could be the key to reaching them.
This is more of a tragic film than a horrific one. Emmanuel Hildern tries to do what he thinks is the right thing, but all he brings about is madness and death. He may be misguided, but he certainly doesn't deserve his fate. Peter Cushing brilliantly puts across Emmanuel's emotional sensitivity, and Christopher Lee is at his sinister best as the domineering James Hildern. The film is stuffed with great Victorian atmosphere, and Freddie Francis produces one of this best directorial jobs. Other Cushing-Lee movies made around the same time, such as DRACULA A.D. 1972 and HORROR EXPRESS get more attention, but THE CREEPING FLESH is the better film.

I had never seen THE BROTHERHOOD OF SATAN (1971) until watching it on this Blu-ray. It's definitely the type of movie that played in drive-ins throughout America in the 1970s. A family gets stranded in a small town in California, a town where (of course) strange occurrences and horrific murders are taking place. It's all due to a satanic cult who are attempting to use the children of the murder victims to give them new life. The movie has a weird, creepy atmosphere, but it's overlong--it probably would have worked better as an episode of THE TWILIGHT ZONE or NIGHT GALLERY. There's also a ton of plot holes--while I was watching it I felt there were a number of things that were not properly explained. I don't know if that was what the screenplay was aiming for, or if certain details were inadvertently left out. Strother Martin is one of those actors that you can't help but take notice of, no matter what he's doing, so seeing him as a dedicated Satanist is....interesting, to say the least. THE BROTHERHOOD OF SATAN isn't terrible, but it really has nothing in common with TORTURE GARDEN or THE CREEPING FLESH, and why it is in this collection is a mystery.

This Mill Creek Blu-ray is Region A, and as is usual with this company's product, there are no extras whatsoever. This is a shame, especially in the case of THE CREEPING FLESH--someone like Jonathan Rigby would have been perfect for an in-depth commentary. All three films look very good on this Blu-ray, and they are all in anamorphic widescreen. The colors certainly don't pop, but I can say that TORTURE GARDEN and THE CREEPING FLESH look better on this Blu-ray than they do on the Sony DVD releases of each film.

The biggest inducement to buy this Blu-ray is the price. My final cost from Amazon (before taxes) was only $6.74. That's a heck of a bargain--just THE CREEPING FLESH alone on Blu-ray would be worth more than that total. Peter Cushing fans will obviously want to get this disc. Hopefully Mill Creek will continue to release low-price classic horror and science-fiction films on Blu-ray in the future.
Posted by Dan Day, Jr. at 2:53 PM