HELL IN THE PACIFIC On Kino Blu-ray 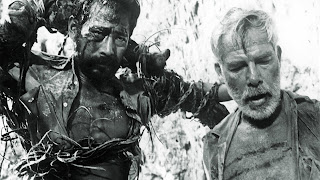 One of the most unusual war films ever made comes to Region A Blu-ray courtesy of Kino Lorber. HELL IN THE PACIFIC (1968) is about as stripped down a film as you can get--if features Lee Marvin and Toshiro Mifune as two soldiers stranded on a small island in the South Pacific during World War II, and the duo make up the entire cast.

The movie was directed by John Boorman, a man who has one of the most diverse and intriguing resumes of any living filmmaker. Filmed on location in the Palau Islands, HELL IN THE PACIFIC makes no allowances to its audience whatsoever. We are given absolutely no backstory on the two men fighting for survival--we don't even learn their names. The duo start out trying to outwit and outfox the other, but eventually come to a grudging unspoken agreement to work together in getting off the island. Even toward the end there's no "special moment" in which the men connect--they always remain alien to one another, and they barely communicate. The story has very little dialogue, but when Toshiro Mifune does speak his words are not subtitled--Boorman did this to make viewers appreciate the characters' plight.

Suffice to say, the artistic highlights of a film like this are probably lost on those used to 21st Century entertainment. I suspect that many who saw this picture when it first came out were puzzled by it as well. Boorman doesn't go the easy route and make either Marvin or Mifune an obvious "good" or "bad" guy--they are just two men trying to deal with circumstances and with each other. The duo are not super warriors or emotionless iron men, but they are not men to be trifled with, either. The best thing about this film is the casting of Marvin and Mifune. Both actors didn't have to act tough--they were real tough guys, the type of men who could say more with a steely glance than by spouting a couple pages of dialogue. (Both men were also actual veterans of the Second World War.) Marvin and Mifune were perfect for this story.

The other highlight of HELL IN THE PACIFIC is the majestic cinematography from the legendary Conrad Hall, who makes grand use of the beautiful desolation of the South Pacific. (By the way, the camera operator on this film was none other than Jordan Croenweth, who would become a renowned DOP in his own right on such films as BLADE RUNNER.) The outstanding visuals are much needed on a story that does not have many action scenes. If you are expecting Marvin and Mifune to engage in an out-and-out lengthy slugfest, you will be disappointed. HELL IN THE PACIFIC runs 103 minutes, and after a while one gets the feeling that Boorman was working hard in coming up with things for the characters to do without killing each other and bringing the tale to an end. This Blu-ray features two different endings, and both of them are very anti-climatic. In my opinion, HELL IN THE PACIFIC is an admirable effort, but it is not a movie for all tastes, and it definitely is not a mainstream war picture.

Kino does its usual excellent job on this Blu-ray, with superior visuals and sound. A brand new interview with John Boorman is provided, and the director delves into the many difficulties involved in making this offbeat production. Boorman reveals that his biggest challenge was Toshiro Mifune--the Japanese cinema legend went out of his way to cause all sorts of problems. (Lee Marvin and Mifune, however, got along great--the two spent most of their off-camera time together getting drunk.) There is also an interview with art director Anthony Pratt, who shares his experiences working on the film.

An audio commentary is provided on this Blu-ray featuring Travis Crawford and Bill Ackerman. Both men give out numerous details about the film, including the many connections between much of the behind-the-camera talent and Toho Studios....but the duo also spend a lot of time talking about John Boorman's other directorial efforts, and they sound much more enthusiastic while doing so. The Blu-ray case sleeve is reversible, and the alternate cover image makes the film look like a typical 1940s Hollywood WWII flick.