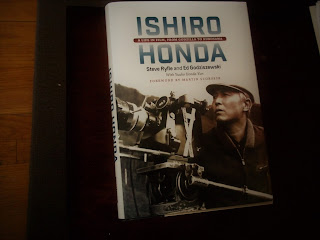 When I started becoming a film buff as a teenager in the 1980s, relevant information about the science-fiction & kaiju films produced by Japan's Toho Studios was almost non-existent. Whenever they were discussed in books and magazines, it was usually in a simplistic and derogatory manner. (I remember that one of those Golden Turkey books named Ishiro Honda as one of the worst directors of all time.) Of course back then the Japanese giant monster movies were only available in their edited, pan-and-scan American versions, which did the films no justice.

Thankfully, the 21st Century has seen nearly all of Toho's kaiju titles released on home video in their original, uncut, widescreen editions. Toho's science-fiction output has recently been given proper critical evaluation, and a welcome addition to that is a new biography by Japanese film experts Steve Ryfle and Ed Godziszewski. ISHIRO HONDA--A Life In Film, From Godzilla To Kurosawa is the definitive story of Godzilla's most famous director.

The book charts more than just Ishiro Honda's work on the Godzilla series. It details his early humble beginnings, his training in the Japanese film industry during the early 1930s, and the interruption of his career with service in the Imperial Army. The authors reveal that Honda was drafted three different times, and it's easy to discern from this biography that the man was very grateful to have survived the experience and gone on to make movies for a living.

After World War II Honda went back to work for Toho Studios as an assistant director, and he eventually got to direct films on his own. He was eventually assigned to a project that would become the very first Godzilla film in 1954, and the success of that would change Honda's life. It wasn't until the 1960s that Honda worked almost exclusively on science-fiction and kaiju films. Before then the director made all sorts of stories--war movies, gangster pictures...he even directed a biography of a famous Japanese baseball pitcher. The authors go out of their way to analyse these little-known parts of Honda's career.

This book portrays Honda as a quiet, unassuming man who was a hard-working professional. For most of his working life Honda was under contract to Toho (much like Hollywood directors were under contract to American studios during the 1930s and 40s), and while he might have inwardly been dismayed at some of the films he was given, he never allowed it to show in his work. The authors detail Honda's collaborations with famed Toho talents such as special effects master Eiji Tsuburaya and music composer Akira Ifukube. Many of Honda's family members and co-workers were interviewed for this biography, including actors Akira Takarada, Kenji Sahara, and Kumi Mizuno.

Perhaps the most fascinating part of the book deals with Honda's relationship with Akira Kurosawa. The two met while beginning to work in the Japanese film industry in the 1930s, and they had a lifelong friendship. In the later years of both men's lives Kurosawa asked Honda to be something of an assistant to him, and they worked together on legendary films such as KAGEMUSHA and RAN. The authors suggest that Honda may have had more input on Kurosawa's later work than is generally realized.

The book features a number of rare photos from Honda's career, and a complete Ishiro Honda filmography. The foreword is written by Martin Scorsese.

ISHIRO HONDA is a magnificent biography--vastly informative, objective, and respectful of its subject. I'm sure most prospective readers will be most interested in Honda's kaiju titles, but you don't have to be a Godzilla fan to enjoy this book. I believe that anyone interested in film & world history will appreciate it. The authors deserve kudos for defining Ishiro Honda as not just a guy who made giant monster movies, but a successful and accomplished filmmaker in his own right.
Posted by Dan Day, Jr. at 10:58 AM