During this year's Monster Bash Conference, I met the esteemed Derek Koch, the man behind the fantastic Monster Kid Radio Podcast. I informed Derek that I would love to be a guest on the show....and a few weeks later Derek called me up and we discussed the 1972 Peter Cushing-Christopher Lee film "The Creeping Flesh". (You wouldn't expect me to talk about a Julia Roberts movie, would you???)

We had a great time, and I think that comes out on the broadcast. I guess this could be considered my first "official" interview....hopefully I won't put anyone to sleep. I'm writing this post on the very day of Thanksgiving, so if you've got nothing to do while resting yourself after the big dinner, I suggest avoiding the crappy NFL games and listen to Derek and I examine what I think is one of the most underrated Cushing-Lee films, and maybe even one of the most underrated examples of English Gothic Cinema. And please check out the other podcasts that Derek has produced....there's all sorts of great geeky stuff in them! 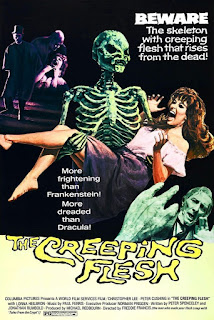