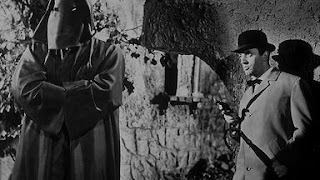 THE BLACK ABBOT (1963) is one of the many German "Krimi" films made based on the works of English novelist Edgar Wallace. A typical Krimi entry is a bizarre fusion of horror, science-fiction, film noir, detective thriller, and pulp adventure. What makes THE BLACK ABBOT stand out is that it is set in and around a large country estate, instead of a Germanic version of London. This film reminded me of the many 1930s and 40s Hollywood B movie mysteries set in old houses, except that THE BLACK ABBOT has a lot more flair to it. (The original German title of this is DER SCHWARZE ABT.)

In an effective pre-credits sequence, a worried man is seen prowling about the grounds of a large estate in the middle of a foggy night. The man is being watched by a sinister hooded figure dressed in black. The hooded figure proceeds to sneak up on the prowler and stab him in the back. After the main credits, we learn that the owner of the estate is one Lord Chelford. The aristocrat's main advisor is his cousin Dick Alford (Joachim Fuchsberger). Both men are suspects in the death of the prowler, and both men know (along with seemingly everyone else in the picture) about a legendary vast treasure of gold hidden somewhere in the estate. A number of suspicious characters are also after the treasure, and all these people have a vested interest in the upcoming marriage of the middle-aged Lord Chelford and the very young and very pretty Leslie (Grit Boettcher).

The figure referred to as THE BLACK ABBOT actually doesn't get a lot of screen time. Most of the plot concerns the main characters double-dealing one another. The multitude of schemes becomes a bit confusing after awhile--it gets hard to keep track of who is doing what and why. Even Dick, who is supposedly the hero, has secrets of his own. To top it all off, there's a shifty butler played by Klaus Kinski. We know right off the bat not to trust this man, because...he's played by Klaus Kinski, for Pete's sake. Nearly every character in the story gets a chance to go skulking about outdoors during the night, and these scenes, which feature atmospheric black & white cinematography, are the highlights of the film.

I've seen a number of Krimi films, and what makes them entertaining is how they go off on all sorts of weird tangents. THE BLACK ABBOT is rather straightforward compared to most Krimis. The title character, when he does appear, makes a striking impression, but in my opinion the hooded abbot is not used enough. At the end of the film the figure's costume is used for a silly joke. The black abbot is really just a diversion from all the other shady goings-on, which include embezzlement, murder, lying, cheating, and old family secrets. The climax has one of the characters going totally off the bend, and kidnapping Leslie.

THE BLACK ABBOT was directed by Franz Josef Gottlieb, who as stated before brings a moody ambience to the nighttime sequences. I don't know anything about the manor house used in the film (I assume it was somewhere in West Germany), but it is a spectacular location for this type of production. I must also make mention of the music score. Usually Krimi films were saddled with jazzy rhythms that didn't seem to match up with what was going on in the story. THE BLACK ABBOT has a score that contributes the right attitude.

The cast features several Krimi veterans, including leading man Fuchsberger, Werner Peters, Eddi Arent, and of course Kinski, who manages to steal every scene he's in.

If you've seen just about every classic Hollywood thriller, and would like to venture into another cinematic realm, I'd like to suggest the Edgar Wallace Krimi movies. A fair amount of them are on YouTube (and don't worry, most of them are dubbed in English). Many of the Krimis feature story lines that will be familiar to movie buffs....but they also take those story ideas and twist them around into divergent and unique paths.