IT'S THE OLD ARMY GAME 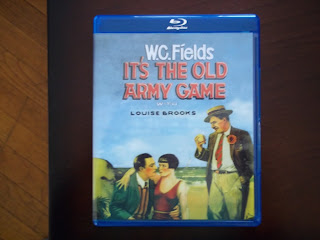 It seems hard to believe that the great classic comedian W.C. Fields made a number of silent films, since so much of his persona is tied to his vocal inflections. But he did, and Kino Lorber has just released one of them on Blu-ray. The 1926 IT'S THE OLD ARMY GAME gave Fields one of his earliest starring roles in a feature-length film, and it also co-starred Louise Brooks, who if anything is even more of a cult icon now than W.C..

W.C. plays small town Florida drugstore proprietor Elmer Prettywille (even in the silent era Fields was using bizarre monikers for his characters). Elmer's life is one of daily frustration--he's constantly hounded by annoying customers and his equally annoying sister and nephew. The only person who doesn't cause Elmer any trouble is pretty Mildred (Louise Brooks), who works at the drugstore. Elmer thinks his life might change for the better when he gets involved in a real estate scheme with a New York City sharpie, but the poor sap just gets into further hot water.

What "plot" there is in IT'S THE OLD ARMY GAME is just an excuse to let Fields do his thing. His character here isn't as vicious or sarcastic as Fields would be in the 1930s. In fact his Elmer is such a klutz that one has to wonder how in the heck this guy can make a living running anything, let alone a drugstore. The gags in this film are funny, but not exactly of the laugh-out-loud variety. Not hearing Fields speak does affect this film. Many of the title cards which represent Elmer's dialogue seem to be the type of things one would expect Fields to say--but without hearing his unique sound and speech patterns, the jokes wind up being somewhat diluted. I have to think that if Fields had never made any sound films at all, he certainly wouldn't have become a cult icon. (One of the title cards does have Elmer say, "Never give a sucker an even break.")

Louise Brooks doesn't have much to do here except look attractive (which she certainly does). The story hints that Elmer is sweet on Mildred, but this suggestion never really gets developed. IT'S THE OLD ARMY GAME was filmed at Paramount's Astoria Studios in New York, and some scenes were filmed on location in Florida. The movie was directed by Edward Sutherland, who would have a very short marriage with Louise Brooks and wind up working with W.C. Fields many times.

The visual quality on this Blu-ray is very sharp--it's quite impressive looking for a 1926 silent film. The music score is by Ben Model. The only extra is an okay audio commentary by film historian James L. Neibaur.

IT'S THE OLD ARMY GAME is definitely a film skewed more toward film buffs. It's a decent comedy, but not on the level of a typical Keaton or Lloyd feature. Louise Brooks fans might be disappointed in her small role, but at least you get to see her in a swimsuit. The main reason to buy this disc would be the novelty of seeing W.C. Fields in a restored, high-quality silent film.