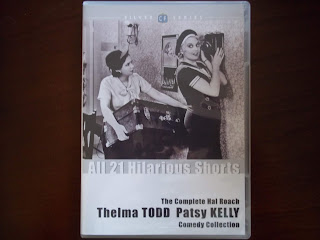 Thelma Todd and Zasu Pitts were teamed for a series of two-reel comedies at the Hal Roach Studio in 1931. Pitts left the series in 1933 after a salary dispute, and she was replaced by Patsy Kelly. Zasu Pitts and Patsy Kelly were as different stylistically as two performers could be--Pitts was flighty and spinsterish, while Patsy was outspoken and sarcastic. Both ladies worked well together with Thelma Todd, who was the more responsible character in the series (though not by much).

Many have compared the Todd/Pitts/Kelly series to the Laurel & Hardy comedies. Personally I think they don't have very much in common. Laurel & Hardy were more fanciful and childlike--a number of their films were set in different time periods. The Todd/Pitts/Kelly series was definitely a product of the 1930s. The girls were very much contemporary working class Americans who were always in need of a job and/or rent money. The girls' adventures play out very much like sitcom TV episodes (especially so since they are each about 20 minutes long). Future female comedy teams like Lucy & Ethel and Laverne & Shirley owe a great deal to Todd, Pitts, and Kelly.

One thing that must also be pointed out is that Thelma and her partners navigated their way into and out of trouble essentially on their own--whatever male characters they encounter wind up being hindrances.

Thelma Todd is one of my favorite all-time movie actresses, and this set reiterates what a superb comic performer she was, despite her glamorous beauty. Thelma's reactions to the various situations she goes through are usually the funniest part of each short, and her timing is excellent. She was also gifted at physical comedy--did any other actress who looked as gorgeous as Thelma ever take as many pratfalls? What's even more refreshing is that Thelma doesn't act like a dumb blonde. I must admit that while watching that set I was paying way more attention to Thelma than Patsy Kelly, but Kelly is very amusing (there are times when she does go overboard on being abrasive).

Among my favorite shorts here are the very first Todd/Kelly short, BEAUTY AND THE BUS, in which the girls win a new car, and OPENED BY MISTAKE, which features Thelma as a hospital nurse and Patsy (as usual) causing her trouble. (This short makes use of slow-motion.) THE TIN MAN is a particularly notable entry, as the girls wind up at an old house and have to fend off a kooky scientist and his robot. For my money, the best Todd/Kelly short is BABES IN THE GOODS, where the duo are display window presenters at a department store. The girls are locked in after closing time, and they wind up putting on a "show" for comic drunk Arthur Housman.

Among the many actors familiar to classic comedy film buffs to be found in this set are Billy Gilbert, Charlie Hall, and Bud Jamison. The short SLIGHTLY STATIC, which is set in a radio studio, has the very first screen appearance by Roy Rogers with the Sons of the Pioneers (it has to be said that Roy doesn't get much to do).

The shorts in this set do not seem to be remastered in any way--the visual quality is okay but not exceptional. The sound quality is very thin on many of the titles. There are no extras, and that's disappointing. A few audio commentaries discussing the history of the Todd/Pitts/Kelly shorts and the ladies involved would have been very welcome, especially on those made after Thelma Todd's death.

The shorts may not be in perfect condition, and they may not have any extras, and they may not be on Blu-ray....but I have to say I'm pleased that this set exists. The shorts here do not rank with the best Laurel & Hardy entries, but they are consistently funny, and they will best be appreciated by those used to this type of classic movie comedy. The best overall aspect of this set is that the viewer gets to spend a lot of time looking at Thelma Todd.