MY MAN GODFREY On Blu-ray From Criterion

The rich Bullock sisters, Irene (Carole Lombard) and Cornelia (Gail Patrick), visit a New York City dump in search of a "Forgotten Man" for a scavenger hunt. They come across a rather unusual and articulate hobo by the name of Godfrey (William Powell). The snooty Cornelia upsets Godfrey, but he agrees to accompany the flighty Irene. Irene becomes so taken with him that she hires Godfrey as the family butler. To say that the Bullock family is eccentric is an understatement, but Godfrey deals with them in his own inimitable way, while trying to navigate around Irene's growing affection for him.

MY MAN GODFREY is one of those few films that flow so effortlessly it doesn't even seem to be scripted or directed. The man who did direct it, Gregory La Cava, had a reputation for keeping things loose on the set, and on this film he had the perfect cast to work with. MY MAN GODFREY is also one of those few films where everyone in the ensemble steals the movie. Four different actors were nominated for Oscars here--William Powell, Best Actor, Carole Lombard, Best Actress, Mischa Auer, Best Supporting Actor, Alice Brady, Best Supporting Actress--but the other main cast members such as Eugene Pallette, Gail Patrick, and Jean Dixon could have easily been nominated as well.

I've always been impressed with how smooth William Powell was as an actor. His best attribute when it came to comedy was his ability to convey to an audience the absurdity of a situation without being absurd himself. Most performers would overreact to the zaniness going on around them in a story like MY MAN GODFREY, but Powell does more with a brief glance or a slightly raised eyebrow. It's a style of light comedic screen acting that is almost extinct today. 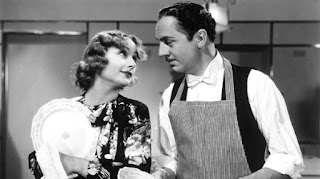 Carole Lombard and William Powell in MY MAN GODFREY

Of course I'm going to praise Carole Lombard here--she's my all-time favorite movie actress, after all. The thing is, calling her "The Screwball Girl" is a bit of a misnomer--she was one of the most intelligent women working in Hollywood at the time. If any other actress had played Irene Bullock, the character might have come off as silly, spoiled, or annoying, but Lombard has so much likability and personality we can't help but be charmed by her. Lombard as Irene adorably reacts to everything the way a 10-year-old girl would--but that's because Irene is essentially a little girl (one main reason why Godfrey doesn't automatically return her affections the way any other man would). Lombard had a naturally unaffected way of being funny while still being glamorous and enticing.

It's very easy to over analyze a movie like MY MAN GODFREY. Simply put, it's an all-around enjoyable film, with a great cast led by two true Hollywood legends. The climax wraps things up a bit too neatly, but this movie wasn't meant to be a social statement--it's supposed to be entertainment, and there's nothing wrong with just sitting back and appreciating a happy ending.

For whatever reason MY MAN GODFREY had fallen into public domain mode, and as a result there are dozens of cheap versions of it on home video. Criterion had released a DVD version of it a while back. This new Blu-ray version from Criterion is easily the best I've ever seen the film look, with greatly increased sharpness and detail.

The new extras include an excellent booklet essay examining the movie by Farran Smith Nehme, and two new featurettes. One of them has Gary Giddins discussing the picture, and the other has Nick Pinkerton looking back on the life and film career of Gregory La Cava. Both featurettes are informative and well worth watching. There is also a radio adaptation of MY MAN GODFREY starring Powell and Lombard on this disc, along with a few outtakes and a trailer. I do have to say that I found the lack of an audio commentary disappointing--this movie cries out for one--and I really wish there had been some sort of featurette on Carole Lombard and her relationship to the 1930s Hollywood screwball comedy genre.

I'm sure most film buffs have one of those cheap home video comedies of MY MAN GODFREY already (I did), but this Criterion version gives the movie the treatment it deserves.