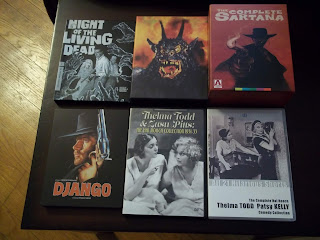 It's the end of the year, and it's time once again for my top five DVD/Blu-rays list. As usual, I spent way too much money on home video--especially movies that I had already owned on other formats. (Three of the films on this list I already had versions of.)

If you are a hardcore movie buff you'll know that the double-dipping problem is getting worse and worse. In the last few months I've re-bought four different Hammer Christopher Lee Dracula movies, mainly because they were making their American Blu-ray debuts. Being a fan of any aspect of Geek Culture is an expensive proposition. But, would I want to be a normal person, whatever that may actually be? No, not really.

As always, each of these picks are from my own personal collection, and no, I still don't have a region free Blu-ray player.


1. NIGHT OF THE LIVING DEAD (Blu-ray) from Criterion
The most influential American independent film ever made finally gets the ultimate home video edition it deserves. Criterion thankfully pulled out all the stops for this one. I wrote a full review of this in February.

2. NIGHT OF THE DEMON/CURSE OF THE DEMON (Blu-ray) from Indicator
This was my very first purchase of an Indicator product, and it's an amazing release. It comes with a 80-page booklet, a double-sided poster, multiple versions of the film, and reams of extras.

3. THE COMPLETE SARTANA (Blu-ray) from Arrow
Nobody presents Spaghetti Westerns better than Arrow Video. This set presents the five "official" Sartana films, with tons of extras on each disc. I reviewed each of the films individually during the summer.

4. DJANGO (Blu-ray) from Arrow
The day after Amazon sent me an email saying this had shipped, Arrow announced it had to cancel this release due to rights issues. But I got mine! One of the greatest (and most depressing) Spaghetti Westerns of all time is magnificently presented and fully analyzed, and this steelbook edition comes with a bonus disc featuring another Franco Nero Euro Western, TEXAS, ADIOS.

5. THELMA TODD & ZASU PITTS: THE HAL ROACH COLLECTION 1931-33 (DVD) from The Sprocket Vault
THE COMPLETE HAL ROACH THELMA TODD PATSY KELLY COMEDY COLLECTION (DVD) from Classic Flix
I was seriously thinking about putting the Criterion Blu-ray release of Universal's early talkie musical KING OF JAZZ on this list, but these two compilations get the last spot due to the fact that their release finally means all the Thelma Todd/Zasu Pitts/Patsy Kelly short subject comedies are available on official home video. It also means that my obsession with attractive blonde actresses such as Thelma Todd wins out again.
Posted by Dan Day, Jr. at 12:02 PM