During the documentary FILMWORKER, it was mentioned that after his appearance in BARRY LYNDON, Leon Vitali portrayed Victor Frankenstein in a 1977 adaptation of Mary Shelley's novel entitled TERROR OF FRANKENSTEIN. This bit of information intrigued me--I thought I had seen, or at least heard of, just about every Frankenstein theatrical film ever made. I had never heard of TERROR OF FRANKENSTEIN, and apparently not too many other people have either--the movie doesn't even have an entry on Wikipedia. There is a decent print of it on YouTube, which is where I viewed it.

TERROR OF FRANKENSTEIN is a Swedish-Irish co-production, directed and co-written by Calvin Floyd. Despite the title it is more of a understated literary period piece rather than a horror film. It is also perhaps the most accurate adaptation of the Shelley tale than any other version that I have seen (and I've seen plenty).

The movie is set in the early 19th Century, and it follows the plot of the novel very closely. Leon Vitali's Victor Frankenstein is very much like the character in the book. He's young, inquisitive, and determined to discover the secrets of life--but he doesn't come off as mad or obsessive. Vitali's Frankenstein isn't the jittery, brooding version of the character played by Colin Clive, or Peter Cushing's cunning Byronic anti-hero. Vitali's Victor is totally unprepared for what to do when he actually does bring a human being of his own creation to life. Instead of gloating over his accomplishment, Vitali runs away in abject fear, leaving his creation on its own--an action which will bring horrible consequences to Victor and his loved ones. Vitali is impressive as a Frankenstein who is somewhat naive about what he is trying to do and unwilling to face up to his responsibilities when he succeeds. (It helps that Vitali comes off very well in period costume, just as he did in BARRY LYNODN.) 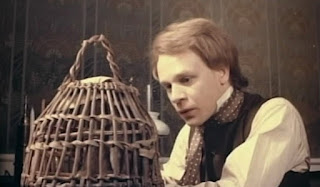 The creature in this film is played by Per Oscarsson, and his performance also matches how the figure acts in the book. First of all, he's articulate, having learned how to read and talk by secretly observing a poor country family (one of the many sequences in Shelley's novel that almost never gets used in any of the movie versions). When the creature tries to reveal himself to the family, they react with fear and loathing, setting off his quest to get revenge on Frankenstein for creating him and then casting him aside.

Oscarsson is very good as the Creature, and his makeup is far more subtle than most movie Frankenstein monsters, though it is still effective. (What stands out most about the makeup here is the Creature's deathly black colored lips.) Oscarsson's Creature is sympathetic but still dangerous.

TERROR OF FRANKENSTEIN has a very understated and straightforward style to it. Director Floyd uses many outdoor locations to give the story an almost docudrama feel, and he avoids extreme camera movements. This movie is set more in the real world instead of the expressionistic landscape of classic Universal horror, or the Gothic never never land of Hammer. The creation sequence in this film has to be the quietest out of all the movie adaptations--the creature comes to life almost by chance, without any bold thunderstorms or wild electric machinery. There's also very little gore in this version.

Some may not like the matter-of-fact approach of TERROR OF FRANKENSTEIN, but I found it refreshing. After seeing so many Frankenstein movies that have almost nothing to do with Mary Shelley's original story, it's nice to see one that is so faithful to the source material. I wouldn't call the movie superb--it is a bit too stately at times, and a bit higher budget might have helped. But TERROR OF FRANKENSTEIN is far more closer to Mary Shelley than other more notable supposed "proper" screen adaptations such as FRANKENSTEIN: THE TRUE STORY or MARY SHELLEY'S FRANKENSTEIN. Just don't expect an action-packed blood-and-thunder horror tale.