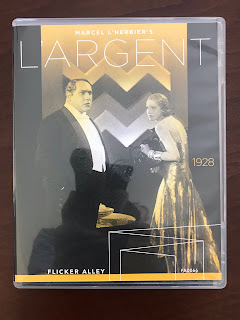 L'ARGENT is a 1928 French silent film that I had no knowledge of until I learned earlier this year that it was going to be released on Blu-ray from Flicker Alley. What caught my attention was finding out that the movie starred Brigitte Helm. I've been fascinated by the German actress since I first saw her in Fritz Lang's legendary METROPOLIS. Except for that film there's very little of Helm's work available on home video in America.

L'ARGENT is certainly a major showcase for Helm, but it's also an outstanding silent era epic, with a running time of two and a half hours. Director Marcel L'Herbier spent a large amount of money on the project, which is fitting because the story, based on a novel by Emile Zola, is about greed and the manipulation of people and events for financial gain.

Set in contemporary times, the main character of the tale is Nicolas Saccard (Pierre Alcover), a financier who is director of a powerful bank. As a result of a bad judgment, he almost ruins the institution he is in charge of. Saccard schemes to regain his stature and get back at his financial rival, Gunderman (Alfred Abel), by backing a famous aviator named Jacques Hamelin (Henry Victor). Hamelin will attempt to fly across the Atlantic to French Guiana, where he, on behalf of Saccard, plans to take advantage of oil deposits there. The journey is successful, but Saccard's hunger for wealth continues to grow, along with his passion for Jacques' young wife, Line (Marie Glory). Complicating matters is Saccard's former mistress, the predatory Baroness Sandorf (Brigitte Helm).

Even though it was made 90 years ago, L'ARGENT still feels very fresh when looked at today. The various financial complications set into motion by the main characters are very reminiscent of what is going on now, with major corporations affecting the lives of millions. One of the subtitles on the Flicker Alley Blu-ray actually says "Fake news". L'ARGENT was made before the stock market crash of 1929, yet it anticipates it, and makes a viewer realize how economies can rise and fall due to the whims of a few people.

Director L'Herbier provides plenty of spectacle to the story, with hundreds of extras and vast, impressive settings. Cinematographer Jules Kruger (who worked on Abel Gance's NAPOLEON) presents all sorts of inventive camera movements, along with several breathtaking shot compositions. The result is that L'ARGENT is a visual feast, ranking right alongside more well-known productions from the silent period.

For all the cinematic flair, L'Herbier still makes the human element important. The portly Pierre Alcover is the ultimate manifestation of a money-making fat cat (if this story had been made in America a few years later, Edward Arnold would have been perfect for the role). It is to Alcover's credit, however, that Nicholas Saccard doesn't turn out to be a total ogre. Henry Victor is the good guy of the movie as the heroic aviator. Film buffs who watch L'ARGENT will be shocked to know that the handsome leading man here would later play the dopey strong man in Tod Browning's FREAKS! Marie Glory projects a sense of innocence as the aviator's wife, but even her character succumbs to the power of money (her bad debts put her in thrall to Saccard). I felt that Glory had a bit of a resemblance to Myrna Loy.

Brigitte Helm doesn't have as many scenes as Marie Glory, but she winds up stealing the film nonetheless. Helm's Baroness Sandorf (there's a striking character name for you) is slinky and seductive, constantly putting herself into whatever situation that will allow her to continue a luxurious lifestyle. Helm wears about fifteen different costumes, each one more stupendous than the last, and she totally dominates whatever scene she's in. If you are a fan of METROPOLIS and you're pining to see more of Brigitte Helm, L'ARGENT will not disappoint you. Helm even gets to have a reunion with the actor who played the Master of Metropolis by sharing a couple scenes with Alfred Abel.

The print of L'ARGENT used on the Flicker Alley Blu-ray was excellent, showcasing all sorts of detail in the production design and the costumes. (This blog post is not meant to be a review of the actual Blu-ray; it's the movie that I'm focusing on here, since I had never seen it before.)

One of the most enchanting joys of being a film geek is making discoveries about titles that one knows next to nothing about. L'ARGENT is one of those pleasant discoveries. Brigitte Helm was definitely the reason I bought this disc...but thankfully the movie is worthy in its own right, a large scale silent blockbuster that features one impressive sequence after another. It is a film that deserves more attention, and more viewership.