BLIND CORNER (AKA MAN IN THE DARK)

BLIND CORNER is a very effective 1964 British black & white suspense drama with a cast that includes some names familiar to film geeks--William Sylvester (2001: A SPACE ODYSSEY), Barbara Shelley (THE GORGON), and Elizabeth Shepherd (THE TOMB OF LIGEIA). The film was released in the United States under the title MAN IN THE DARK.

Paul Gregory (William Sylvester) is an accomplished pianist and successful pop composer. He's also blind, due to an accident a few years ago. Paul's wife Anne (Barbara Shelley) puts on a facade of being a loving and supporting spouse, but she's tired of dealing with Paul and his affliction. Anne has been having an affair with Ricky (Alex Davion), a struggling artist, while making Paul think that Ricky is just painting her portrait. Anne knows if she leaves Paul, she won't get any of his money.....so she tries to convince Ricky that Paul could be easily gotten out of the way. Paul, however, knows far more about what's going on around him than Anne thinks.

BLIND CORNER doesn't have a big budget, and it's not very flashy. Most of the story takes place in Paul's upper-story flat. Despite all this, the movie comes off very well, due to the cast and the script.

William Sylvester has a reputation for--how shall I put this?--being somewhat bland as an actor. This blandness happens to be a plus in BLIND CORNER. Paul Gregory seems ordinary, he's blind, and he's drinks a bit as well. Because of all this, he seems an easy mark for the duplicitous Anne. But Paul "sees" more than the rest of the other characters do, and he's able to use his detriments and turn them into strengths. Everyone around him appears to take Paul for granted, and he uses this to his advantage.

I've always though that out of all the leading ladies of Hammer Films, Barbara Shelley had the best overall acting ability. She certainly gets a chance to show it here. Her Anne is devious, cunning, and sexy. (At one point Paul, Anne, and Ricky are in the same room together, and Anne can't keep her hands off of Ricky. Shelley ably shows that Anne is turned on by being able to cheat on her blind husband while he's literally standing in front of her.) Most actresses would play the role of Anne very broadly, but Shelley makes the character real, which makes her all the more threatening. A twist that comes very late in the film reveals that Anne is even more devious than the viewer already knows. 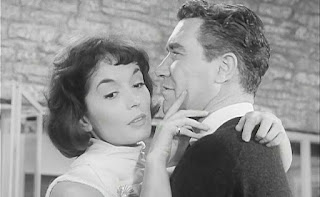 Alex Davion is fine in the role of fall guy Ricky, and Mark Eden plays Paul's friend and manager Mike. Elizabeth Shepherd plays Paul's loyal secretary, who has a crush on him (she's the "nice girl" opposite of Anne).

The strange thing about BLIND CORNER is that it has two song sequences. Both songs are sung by Ronnie Carroll, who was a British pop star of the time (I have to admit I had never heard of him). The songs are supposed to be representations of Paul's composing skills, but honestly if they had not been included in the film it wouldn't have made any difference in the story.

BLIND CORNER was directed by Lance Comfort, who, despite the budgetary and setting limitations, makes the story suspenseful and engaging. (Comfort and William Sylvester would be reunited in the modern English Gothic film DEVILS OF DARKNESS).

If BLIND CORNER had bigger names involved in front of and behind the camera, it would be more well-known--but the low-key aspects of the production are, in my opinion, what makes it work. The movie is also a superb example of Barbara Shelley's talent.