This is post #1000 of The Hitless Wonder Movie Blog. One Thousand!!?? I can't believe I've written a thousand of these things....and I can't believe that they've had much of an overall effect. Nevertheless, I plan on continuing to write them for the time being.

I tried to figure out something special that I could do for this particular post, and I was at a loss for ideas. I then decided to write a review on the only film that features my favorite actress (Carole Lombard) and favorite actor (Peter Cushing).

VIGIL IN THE NIGHT was made by RKO, produced and directed by George Stevens, and released in 1940. It is the third in a quartet of consecutive films starring Carole Lombard in which she attempted to move away from her comedic persona (the other films were MADE FOR EACH OTHER, IN NAME ONLY, and THEY KNEW WHAT THEY WANTED). Here Lombard plays a dedicated and determined English nurse named Anne Lee.

The story begins with Anne and her irresponsible sister Lucy (Anne Shirley) employed as nurses at a remote country hospital. Due to Lucy's negligence, a child dies, but the selfless Anne takes the blame to protect her sister. Anne obtains work at a city hospital that is short of money and staff. There she meets the distinguished Dr. Prescott (Brian Aherne), and the two become interested in one another. Anne goes through numerous trials and tribulations, but no matter what, she still remains hardworking, upbeat, and absolutely devoted to her chosen profession.

VIGIL IN THE NIGHT was a major production for RKO, George Stevens, and Carole Lombard. It was based on a well-received novel by A. J. Cronin (which I have not read). Everyone involved in the film had high hopes for it. It is very well made, but it is basically a soap opera, and very grim at times. This is a movie that begins with a child dying onscreen, and things don't get much more optimistic from there.

Among the things that Anne Lee has to deal with are shame and guilt after taking the blame for her sister's mistake, a bus crash, unsatisfactory conditions at the hospital she winds up at, being accused of coming on to the rich, middle-aged, and married chairman of the hospital's board (when it was he who was coming on to her), and, finally, a deadly epidemic. And she still has to put up with her sister's continuing personal problems.

Anne responds to all these issues with confidence and equanimity--so much so she almost borders on being unbelievable. It's to Carole Lombard's credit that Anne doesn't come off as being too goody-goody or ridiculous. Lombard plays Anne in an understated, reserved manner, without any dramatic histrionics. (She doesn't get to wear any glamorous fashions, but she still manages to look beautiful nonetheless.) I'm sure that many of Lombard's fans may not like this performance--her usual liveliness and spontaneity are tamped down here--but one has to remember that she is playing a truly decent and dedicated individual, and a English lady at that. (Lombard doesn't use a full English accent--she modulates her voice with a trace of Mid-Atlantic, but I think it works.) Lombard isn't playing an overly emotional screwball girl--Anne Lee is a serious professional, who sublimates her own feelings in order to deal with whatever task is at hand. There are such people in the world (at least I hope there are), and I believe that this is one of Lombard's best and most underrated performances. 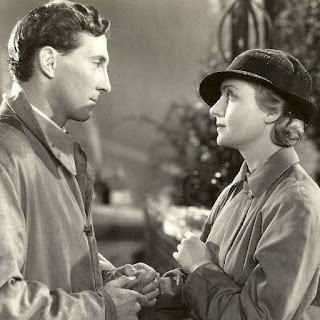 Peter Cushing and Carole Lombard in VIGIL IN THE NIGHT

As for Peter Cushing, he only has a few scenes, but he gets to act with Lombard in every one of them. Cushing plays Joe Shand, who is (understandably) attracted to Anne. After the incident with the death of the child at the beginning of the film, Joe marries Anne's sister Lucy, which causes more complications--the couple go to London, Joe can't find a job, and Lucy leaves him to work at a shady "rest home" where she gets in trouble again. In one of the many coincidences in this movie, Anne and Dr. Prescott come to Lucy's rescue, and Anne and Lucy wind up working in the isolation ward during the epidemic. Lucy redeems herself at the climax, but she also "pays" for her earlier mistakes as well, in classic Hollywood fashion. Anne Shirley is good as Lucy, although I suspect that the real-life Lombard would have given the character a few slaps upside the head, or at least chewed her out. Cushing gets to have an emotional scene at the end, where he blames Anne for Lucy's fate. It's a bit startling to see Cushing look so young on screen, and to see him play someone who is basically a bumpkin. One wonders how Cushing's career would have fared if he had stayed in Hollywood--he would soon leave California and start a long and complicated trek back to his home in England (he felt uneasy about being away with World War II going on).

Brian Aherne is efficient as Dr. Prescott, but the character seems too stuffy to be all that appealing (that's a good description of the film overall). Film geeks will appreciate that Donnie Dunagan, who played Basil Rathbone's boy in SON OF FRANKENSTEIN, has a cameo as a child Prescott is trying to help. (This means that two members of the cinematic Frankenstein family--Dunagan and Peter Cushing--appear in this film.)

One expects any film directed by George Stevens to be well-crafted, and VIGIL IN THE NIGHT certainly is. But the entire film is dark and moody--as is the cinematography by Robert de Grasse and the music by Alfred Newman. This is a story extolling the virtues of the nursing profession, so one understands why it must be serious--but one wishes that Stevens had injected some touches of humor in the story, and made Anne Lee a bit more ordinary.

VIGIL IN THE NIGHT was not a box office success for RKO, and I doubt that audiences of 1940 would have been all that receptive to seeing a toned-down Carole Lombard dealing with sick & dying children. If the film had been better received Lombard might have even snagged an Academy Award nomination for it. This movie isn't popular among Lombard buffs, but it proves that she was a much more well-rounded actress than she has been given credit for. VIGIL IN THE NIGHT is nowhere near as fun to watch as MY MAN GODFREY or NOTHING SACRED, but it does show how talented Carole Lombard really was.