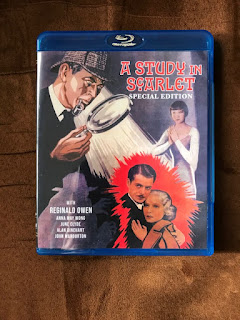 The only film in THE SHERLOCK HOLMES VAULT COLLECTION Blu-ray set that does not have Arthur Wontner as Sherlock Holmes is A STUDY IN SCARLET (1933), made at the low-budget Tiffany Studio in Hollywood. Character actor Reginald Owen plays Holmes.

Members of a secretive group called the Scarlet Ring are being killed--and, due to the group's rules, the money the victims have left behind are distributed to the rest of the association. Sherlock Holmes takes up the case, which leads him to a nefarious lawyer named Thaddeus Merrydew (Alan Dinehart) and the mysterious widow of one of the victims (Anna May Wong).

A STUDY IN SCARLET only uses the title of Conan Doyle's first Sherlock Holmes story. The plot is jettisoned for a tale that in some ways anticipates Agatha Christie's TEN LITTLE INDIANS. The screenplay for the film was co-written by noted director Robert Florey (MURDERS IN THE RUE MORGUE) and Reginald Owen himself.

Owen had in fact just played the role of Dr. Watson the previous year in SHERLOCK HOLMES, which starred Clive Brook as the detective. Owen was much more suited to play Watson than Holmes. The actor is bulky, and his voice and physical mannerisms are unlike what one expects from a person portraying Sherlock Holmes. Owen's Holmes does disguise himself in the middle of the film, but this sequence goes on too long and brings the story to a halt.

What helps elevate this movie from other low-budget mysteries made in the same period is its ensemble cast, which includes Alan Mowbray, J.M. Kerrigan, Billy Bevan, Halliwell Hobbes, and Leila Bennett (who basically reprises her comic scared maid bit from DOCTOR X). Anna May Wong makes the biggest impression--one wishes she had more scenes instead of Owen's mediocre Holmes.

A STUDY IN SCARLET was directed by Edwin L. Marin (THE DEATH KISS) and the cinematographer was Arthur Edeson (CASABLANCA). Because of these two men, the film has a bit more visual flair than the usual B movie murder mystery. Unfortunately it's hard to appreciate Marin and Edeson's work on this Blu-ray, due to the print that was used. It lacks sharpness and detail, and it comes off as more grey than black & white. The sound is also very hollow and indistinct.

The extras on this Blu-ray include a 10 page booklet written by C. Courtney Joyner. In it Joyner discusses how and why A STUDY IN SCARLET has been one of the least adapted of the Conan Doyle Holmes stories. A card with poster artwork from the film is also provided.

There's also a featuette entitled ELEMENTARY CINEMA: THE FIRST CINEMATIC ADVENTURES OF SHERLOCK HOLMES, from Ballyhoo Pictures. The title is misleading, since it mainly covers Sherlock Holmes films made in the 1930s. (Movies featuring the character had been made since the start of the 20th Century.) Nevertheless, it is one of the better extras on the entire box set. A 1926 Mutt & Jeff cartoon called SLICK SLEUTHS is here as well.

This disc also has a new audio commentary, with Peter Atkins and David Breckham. The duo attempt to talk about various aspects of the production, but they get sidetracked quite easily, and they spend a lot of time cracking each other up.

Reginald Owen, in my opinion, is one of the least effective Holmes (his address in this film is even 221A Baker Street!). A STUDY IN SCARLET, however, is of interest due to the supporting cast and the names involved that were behind the camera. One does wish that a much-better looking print (if one exists) was used for this Blu-ray.