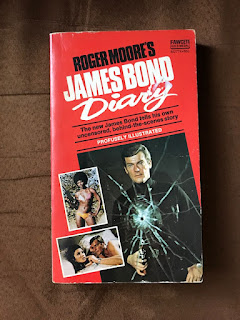 On my latest excursion to Half Price Books, I picked up this little paperback item for $3. ROGER MOORE'S JAMES BOND DIARY was written to coincide with the theatrical release of LIVE AND LET DIE, the first Bond film that Moore starred in.

I assume that Moore had some ghostwriting help on this...but having listened to a few audio commentaries featuring the actor, I have to say the writing style matches his persona perfectly. He comes off as a witty, charming fellow who doesn't take life (or himself) too seriously.

Without getting too technical or detailed, Moore charts the production history of LIVE AND LET DIE, starting in the fall of 1972 with location shooting in Louisiana and Jamaica, to interior sets at Pinewood Studios in England, and back to America for more locations in New York City.

At times, Moore makes it seem that he's on a bizarre vacation instead of playing the leading role in a major feature film franchise. He spends a lot of time going over what he had for breakfast, lunch, and dinner, and how it was served. He also goes into great detail about his living conditions at each location.

Ironically, Moore has very little to say about his approach in playing 007, or even how he feels about the character (he constantly refers to Bond as "Jim" or "Jimmy"). If you are expecting a intimate examination of how one performs Ian Fleming's hero on the screen, or a thorough analysis of the script, you won't find it here. (Needless to say, Daniel Craig wouldn't have written this type of book.)

This book reveals that much of Moore's average working day was taken up by posing for publicity photos and doing interviews. Even 50 years ago, the press coverage for a Bond film--and a new Bond--was immense. One of the running gags of the book has Moore trying to figure out how many ways he can answer the question "How will your Bond be different than Sean Connery's?"

Despite the trials and tribulations he had to endure as the new 007, Moore still found a way to keep up with his social obligations. The actor drops plenty of famous names who happen to be his friends or acquaintances (among the many are Sir James Carreras and Christopher Lee). Moore confides that he prefers to be at home with his wife and children, but he never seems to actually spend much time there.

There's not much dirt or gossip to be had in this diary--Moore was too much of a gentleman for that--but it one reads between the lines, it seems there was a bit of tension between Yaphet Kotto, who played the villain, and director Guy Hamilton. Moore certainly exudes a sardonic sense of humor here, but for the most part he keeps things PG rated. (Some folks, however, might raise a Roger Moore-like eyebrow to his nickname for co-star Gloria Hendry.)

All in all, this was a fun, breezy read, and James Bond movie fans will find a lot of interesting details in it. My feelings about Roger Moore have changed a number of times over the years. He was the James Bond of my childhood (for a while I considered him the James Bond, because he was the first one I saw in the role). When I became a teenager and started actually reading the Ian Fleming novels in the mid 1980s, I began to feel that Moore was too old and too goofy for the role.

My feelings for the Bond movies that Moore starred in haven't changed--most of them are very mediocre. But in the ten years or so my appreciation for Moore has grown. He believed his main job was to entertain the audience--and he certainly did that. I also admired the fact that after he left the role he didn't seem embarrassed to discuss it, and he never acted as if 007 was beneath him. One other factor is that my friend Veronica Carlson, who knew and worked with Moore, absolutely adored him.

A new edition of this book was published a couple years ago (I assume that it has the same text as the original version). Whatever edition is available, I highly recommend it.