THE MYSTERIOUS DR. FU MANCHU On Blu-ray From Kino 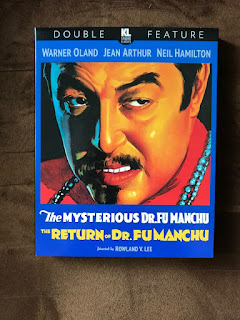 Kino has released a true (and rare) treat on Blu-ray--the two Fu Manchu films made by Paramount during the early talkie period. THE MYSTERIOUS DR. FU MANCHU (1929) and THE RETURN OF FU MANCHU (1930) were both directed by Rowland V. Lee, and Warner Oland plays the nefarious doctor in each. I'll be discussing the first film in this blog post.

THE MYSTERIOUS DR. FU MANCHU begins in 1900 during the Boxer Rebellion in China. The wife and young son of the kindly scientist Dr. Fu Manchu are inadvertently killed by British soldiers during a battle. The grief-stricken Fu Manchu swears revenge on the officers he considers responsible. Nearly 30 years later, in England, the doctor puts his plans in motion, using a beautiful young Caucasian woman (Jean Arthur) to attract the attention of a Dr. Petrie (Neil Hamilton). Petrie's father was one of the British officers Fu Manchu wants to kill. Luckily British Inspector Denis Nayland Smith (O. P. Heggie) is on hand to foil the doctor's evil plans.

For those that assume THE MYSTERIOUS DR. FU MANCHU is too politically incorrect to be enjoyed today, the movie gives the title character a sympathetic backstory which has nothing to do with anything written by Sax Rohmer in his many Fu Manchu novels. Warner Oland's Fu is different from the one in Rohmer's books. Rohmer's Fu was described as tall and feline (which Oland is decidedly not). The Rohmer Fu is also bent on world conquest, while Oland's Fu is only concerned with getting revenge on those he believes killed his family. THE MYSTERIOUS DR. FU MANCHU certainly doesn't have a 21st Century sensibility when it comes to dealing with Asian characters, but it's nowhere near on the same level as MGM's wild-and-wooly THE MASK OF FU MANCHU, or even some of the 1960s Fu Manchu films starring Christopher Lee.

One does have to take into account that this film is a very early talkie, and it is very creaky and stage bound at times. (The most visual exciting sequence is the Boxer Rebellion battle at the beginning of the film.) There are a number of impressive sets here, including some expressionistic recreations of London's Limehouse district, but the production doesn't--or wasn't able to--take full advantage of them. At one point the heroes take refuge in a old castle located on a sea-side cliff, and the domicile reminded me very much of Bela Lugosi's castle in WHITE ZOMBIE.

Something else that reminded me of WHITE ZOMBIE was Jean Arthur's performance as Lia, the unwitting instrument of Fu Manchu's revenge. When Lia is at the castle, she's hypnotized by Fu, and as she wanders around, dressed in flowing white, she brought to my mind Madge Bellamy in the undead classic. The Jean Arthur in THE MYSTERIOUS DR. FU MANCHU is not the independent, spunky Arthur of the mid-1930s. Here she's a wide-eyed naive ingenue, the ultimate damsel in distress. In his biography of the actress, John Oller quoted Arthur as saying her Fu Manchu films "were dreadful".

Neil Hamilton (who will always be known for playing Commissioner Gordon on the BATMAN TV series) makes a decent romantic hero, although his Dr. Petrie has very little in common with the one featured in the Rohmer novels. O. P. Heggie (best known as the blind hermit in BRIDE OF FRANKENSTEIN) plays Nayland Smith very much as Rohmer wrote him--steadfast, determined, and to the point. One of the detriments of the film is the very annoying "comic" relief by William Austin as a prissy, weak-kneed servant of the Petrie family (one spends the entire film wishing Fu would kill off this guy quick.)

For several years the Paramount Fu Manchu films were unavailable to the public. Both of the films make their official home video debut on one Region A disc. THE MYSTERIOUS DR. FU MANCHU is presented in a 1.20:1 aspect ratio. Kino states that the print used is from a new 2K master, and the black & white film looks very good for being made over 90 years ago. The sound quality is not great--but this is a very early sound film. There are times when the dialogue is not very distinct--obviously sound mixing and editing was in its infancy then.

The main extra for this film is a new audio commentary by Tim Lucas. As expected, it's an excellent one, with Lucas giving out relevant info on Sax Rohmer and the Fu Manchu character. He also discusses the production history of the film, and how it falls in between the silent era and the time when Hollywood was fully proficient in working with sound. A few trailers from other early sound films released by Kino are also included.

THE MYSTERIOUS DR. FU MANCHU will be more appreciated by film buffs and those who have actually read the Sax Rohmer Fu Manchu novels (I belong to both categories). No matter what one thinks of the film, Kino deserves all the compliments they can get for putting it out on Blu-ray. I'll be reviewing THE RETURN OF DR. FU MANCHU on a future blog post.