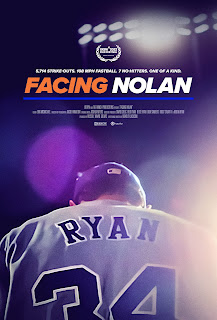 As you can tell by the name of this blog, I am a lifelong dedicated fan of the Chicago White Sox. But I'm also a dedicated baseball fan period, and there are several MLB players I've had great admiration over the years who never wore a White Sox uniform.

One of my favorites was the legendary pitcher Nolan Ryan. His records, longevity, and status as the premier power hurler of the 1970s and 1980s make him seem more like a myth than a real person. Everything he accomplished most definitely happened, and it's all covered in the excellent new documentary FACING NOLAN, written & directed by Bradley Jackson.

The film really does go deep in the heart of Texas, thoroughly examining Ryan's upbringing in the Lone Star State and his loyalty to it. The movie also follows Ryan as his MLB career takes him from his first team, the New York Mets, to the California Angels, where he became a star; to the Houston Astros, where he was paid the biggest contract in baseball at that time; and finally to the Texas Rangers, where he cemented his status as one of the greatest legends in American professional sports.

FACING NOLAN also establishes how important Ryan's wife Ruth was to his life and baseball career, and how important family was and still is to him. It also reveals that, despite his intimidating presence on the mound and his Hall of Fame reputation, Ryan would much rather be dealing with cattle on his Texas ranch instead of basking in the spotlight.

There's plenty of rare video and audio here from Ryan's baseball career, and there's also several interviews with those who played with and against him. Ryan, his wife, and his children are also extensively interviewed (Ryan himself comes off as self-effacing and thoughtful).

I loved this documentary, and one of the main reasons is that I grew up in the late 70s and early 80s, when Nolan Ryan was at his height as a baseball star. Anyone who followed Major League Baseball in the 70s and 80s will certainly have their memories jogged while watching FACING NOLAN. This movie will also make baseball fans realize how much the game has truly changed--most of Ryan's records will never have any chance of being broken, let alone even being approached--not when the average MLB pitcher of today seemingly goes on the disabled list every other week.

There's something else about FACING NOLAN that makes it special, and it doesn't have anything to do with baseball. It's the fact that it's very refreshing to watch a modern-day documentary about a famous American who is truly a hard-working, talented, decent individual, and who doesn't have any trending tabloid stories about him, or any embarrassing moments to deal with. FACING NOLAN is really a positive story about American effort and perseverance, and we certainly need such stories in this day and age.