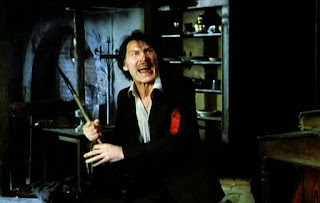 CRAZE is a 1974 British horror film, with plenty of notable names involved in it. It was produced by Herman Cohen and directed by Freddie Francis, and it stars Jack Palance, along with a supporting cast featuring several impressive talents of the English stage & screen. Despite boasting such a collection of worthy individuals, there's no reason to get crazy over CRAZE.

If you're familiar with the Herman Cohen Cinematic Universe, the story structure of CRAZE won't surprise you any. As in many other Cohen pictures (I WAS A TEENAGE FRANKENSTEIN, HORRORS OF THE BLACK MUSEUM, BLACK ZOO, etc.), CRAZE features a mentally deranged middle-aged man committing a series of bizarre gruesome murders, while at the same time ensnaring a younger male friend into a web of lies and deceit. In between the occasional killings are far too many scenes of various Scotland Yard inspectors trying to figure out what is going on, and multiple characters yelling at each other.

Jack Palance plays Neal Mottram, an antiques dealer in London who also happens to worship an African god named Chuku. Mottram keeps a statue of Chuku in the cellar of his shop, and he learns that by offering sacrifices to it--or to put it bluntly, by murdering women--he apparently receives financial windfalls. Neal's young friend and business partner Ronnie (Martin Potter) tries to convince Neal after a few of these windfalls that they should take the money and get away before the police get on to them. Neal, however, is convinced that Chuku must continually be offered more and more sacrifices. Eventually the truly crazed Neal serves Chuku in the most personal way possible.

Like just about every horror film produced by Herman Cohen, the plot of CRAZE isn't all that riveting when you actually sit down and watch the whole thing. The viewer never finds out exactly why Neal worships Chuku in the first place, or whether this "god" is actually helping him in some supernatural way, or even whether Neal is possessed by Chuku. As Neal, Jack Palance gets plenty of chances to let it rip, but his sweaty, loony antics aren't very thrilling. Michael Gough (who played similar roles in a number of Herman Cohen productions) had enough mad charisma to make such a character entertaining to watch, but Palance is just strange and off-putting. I wanted the police to catch him mainly so the movie would come to an end.

What's astounding about CRAZE is the number of distinguished performers that Herman Cohen somehow managed to convince to appear in it. Trevor Howard and Michael Jayston play Scotland Yard investigators, and there's also Dame Edith Evans, Hugh Griffith, Diana Dors, and Kathleen Byron. Hammer veterans Julie Ege, Percy Herbert, and David Warbeck also have small roles. One would think that with a cast like that, something interesting would result, but it doesn't.

One would also think that with a director like Freddie Francis and a cinematographer like John Wilcox, there might be some visual flourishes at least...but it seems that these two men did just enough to make CRAZE a competently made film, nothing more. By the time he was shooting CRAZE, Freddie Francis had become burned out by the many low-budget horrors he had worked on, and it shows. I can't name one single scene in CRAZE that was handled in an imaginative or memorable manner. The movie has a seedy and unpleasant look and feel to it.

Of course, Francis had to deal with the script he was given. The one for CRAZE was written by Cohen and his longtime collaborator Aben Kandel, and it plays like a "usual scenes" medley of their earlier thrillers. There's not much action in CRAZE...but there's plenty of shots of Palance walking around a number of English locations. At one point, during a very protracted sequence, Neal sets up a one-night stand with a former flame played by Diana Dors, in order to establish an alibi. The viewer immediately suspects that Dors will wind up being a future victim--but it never comes to that.

CRAZE was made at the tail end of the Golden Age of the English Gothic horror film, and by this time Herman Cohen's typical approach to such material was wearing very thin. As a matter of fact Cohen never produced a film of this nature on his own ever again. CRAZE will get attention from English Gothic fans (such as myself) for the names attached to it, but a cast & crew such as this deserved a much better production.