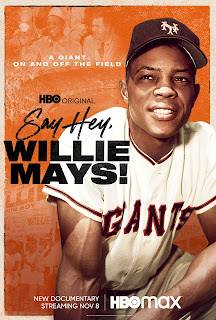 It is universally acknowledged among sports fans that Willie Mays is one of the greatest baseball players of all time. Yet it seems that writers and the mainstream media are not as obsessed with Mays as they are with the likes of Mantle, Di Maggio, Ted Williams, etc. This film gives Mays some much needed attention. Most of the running time consists of Mays on camera talking about his life and playing career. The Say Hey Kid may be 91 years old now, but he's still very sharp and gregarious, and he appears to enjoy reflecting upon his amazing story.

The documentary proceeds in a straightforward manner, starting with Mays' upbringing in Alabama, his time in the Negro Leagues, and his immediate impact upon joining the New York Giants in 1951. The film details the Giants' move to San Francisco in 1958, and how it took Mays awhile to gain acceptance in Northern California. There's also plenty on Mays' return to New York in 1972 when he was traded to the Mets.

SAY HEY, WILLIE MAYS! runs almost 100 minutes, but the subject's personal life is barely touched upon. What is discussed is Mays' choice to avoid making political & social statements, even in the volatile 1960s. It's obvious that Mays would much rather talk about baseball more than anything else.

Several of Mays' former teammates and contemporaries are interviewed, and much is made of Willie's very close relationships with Bobby and Barry Bonds. (The latter gets plenty of screen time, and he comes off as surprisingly humble when discussing his mentor and godfather.)

There's plenty of historical footage and audio included, and of course "The Catch" Mays made in the 1954 World Series is analyzed. There's not much here for stat geeks to get into--Mays' fantastic numbers are not really looked at--but this is a story about the man himself.

Willie Mays doesn't appear to have had the controversies and personal problems surrounding him as did many other baseball legends. That might be why his public profile isn't as large as his playing career was. Or it may be, as this documentary shows, Mays let his play on the diamond do most of his talking. If you do watch SAY HEY, WILLIE MAYS!, I suggest afterwords going on the internet and delving into his baseball stats. You'll have a far greater respect for him.