RAWHIDE--"Incident On The Edge Of Madness"

So I'm writing a post on a episode of a TV show that first aired over 60 years ago?? Well, it's my blog, and why would I write about anything new on TV today?? Besides, this episode gives cult legends Lon Chaney Jr. and Marie Windsor a chance to shine.

"Incident on the Edge of Madness" was one of the very first episodes of RAWHIDE. It was the fifth entry in the series' first season, and it originally aired on Feb. 6, 1959. It used a plot element that would become very familiar over the entire run of RAWHIDE--an individual (or individuals) show up on the cattle drive and cause disruptions and chaos among the drovers working the herd.

Gil Favor (Eric Fleming) and his men are irritable, bored, and tired. The last thing Favor needs is an annoying distraction--and he gets it with the arrival in camp of a former Confederate colonel named Millett (Alan Marshal). Millett (who Favor served under in the Civil War) is trying to sign on men to help him in a mad scheme to restore the Confederacy in Panama (with Millett as Emperor). Millett makes all sorts of wild promises, and he has with him the charming and enchanting Narcissa (Marie Windsor), who flashes her devastating smile on the discouraged and dusty drovers. Favor quickly sends Millett and his lady out of camp, and tries to tell his men that the scheme is a fool's errand, but many of the drovers are intrigued--none more so than Jesse Childress (Lon Chaney Jr.). 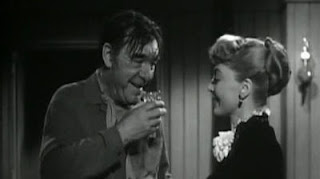 Jesse is a "big, dumb ox", but he aspires to be more, and when Marie Windsor looks into his eyes and smiles at him, he's overwhelmed. Jesse leaves the camp and becomes Millett's "first officer". He also convinces himself that he and Narcissa have an "understanding", although in reality the woman is merely using him. Other drovers join up as well. Favor, needing all his men for the drive, rides into the nearest town (which is controlled by Millett) to try and bring them back. While at Millett's plantation house, Narcissa turns her wiles on him, hoping to lure him into the scheme. Favor also finds out that Millett intends to rob an army payroll to obtain the funds needed for his plan. Favor is determined to stop his wayward men from getting killed or thrown in jail....but a jealous Jesse demands Narcissa's love, and the big lug kills Millett when he tries to intervene. At the local saloon Jesse declares that he's in charge of the expedition now, but he's shot and mortally wounded before he can cause any more trouble.

"Incident on the Edge of Madness" was directed by the efficient (and underrated) Andrew V. McLaglen, and the well-written script is credited to Herbert Little and David Victor. The real highlight of the episode is Lon Chaney Jr. The character of Jesse obviously has a lot of Lon's Lennie from OF MICE AND MEN in him (Jesse even has an attachment to a stray calf that he takes care of during the story), but Chaney doesn't just do an easy imitation of his former famous role. Jesse is an uncouth, scraggly working man, who's obviously had a hard life...but Chaney subtly shows that the man realizes Millett's scheme might give him a chance to be respected, and, in the form of Narcissa, to even be loved. It's a unrealistic chance, and certainly Jesse is too naive and uneducated to understand he's fooling himself--but Chaney makes the viewer kind of feel sorry for the big lummox, and even hope he ends up all right. I've seen Lon Jr. in a number of movies and TV shows, and I have to say that this is one of his best performances. His Jesse is loud, boisterous, and overeager, and at times even dangerous, but the actor is still able to show the man's sadness underneath, and his need of love and respect. (And...he even engages in a knock-down, drag-out fistfight with Gil Favor.)

This episode is also a great showcase for Marie Windsor. Windsor (who looks exquisite here) had the beauty and the acting chops to be a major leading lady, but she never got to that level, maybe because she was too talented. She's best known now as a femme fatale or bad girl, but she could play any role, under any circumstance, and do it well. Technically Narcissa is a "bad girl'--she effortlessly flirts with any man to get what she wants--but Windsor gives you a sense that this woman has also had a hard life as well, and that she's also trying to better herself. It's Narcissa that's the real force behind Colonel Millett. The silver-tongued Millett is actually more talk than substance, and Narcissa knows very well how weak the man truly is.

Alan Marshal is all right as Millett, but I wonder how it would have been if a stronger actor had played the role (could you imagine what, say, someone like Vincent Price could have done with it?). Then again, Millett is meant to be a lesser figure, more a guy strutting around in a uniform than a man of substance.

You might have noticed by now that I've not yet mentioned Clint Eastwood, who played Rowdy Yates, the second male lead of RAWHIDE. The fact is, Rowdy has almost nothing to do in this episode--he spends most of his time off to the side, observing what is going on. "Incident on the Edge of Madness" is a prime example of one of those American TV series episodes where the guest stars get all the glory, and the series regulars are somewhat in the background.

The "Guest Star of an episode" was a very important element of classic American television. Many of these guest stars were movie legends who got the chance to do things and play roles they never would have been able to do on the big screen. Whenever I read a biography of a notable actor or actress, it bothers me when that person's television work is ignored, or merely mentioned as a footnote. With all the retro TV shows streaming all over the place now, I believe these TV guest star performances should be analyzed and discussed just like a feature film role would be. Lon Chaney Jr. in "Incident on the Edge of Madness" is a case in point. Lon Jr. gets far more of a chance to impress here than in any big-screen movie he appeared in during this period.

As mentioned earlier, "Incident on the Edge of Madness" was one of the very first episodes of RAWHIDE. One notices here that the characterizations of the recurring cast had not been finalized (long-time RAWHIDE fans will note that Eric Fleming is much more emotional and talkative here than he would be during his time on the series). It's still an excellent hour of TV, especially if you are a fan of Lon Chaney Jr. or Marie Windsor. The episode can be viewed for free on the Pluto TV streaming channel.