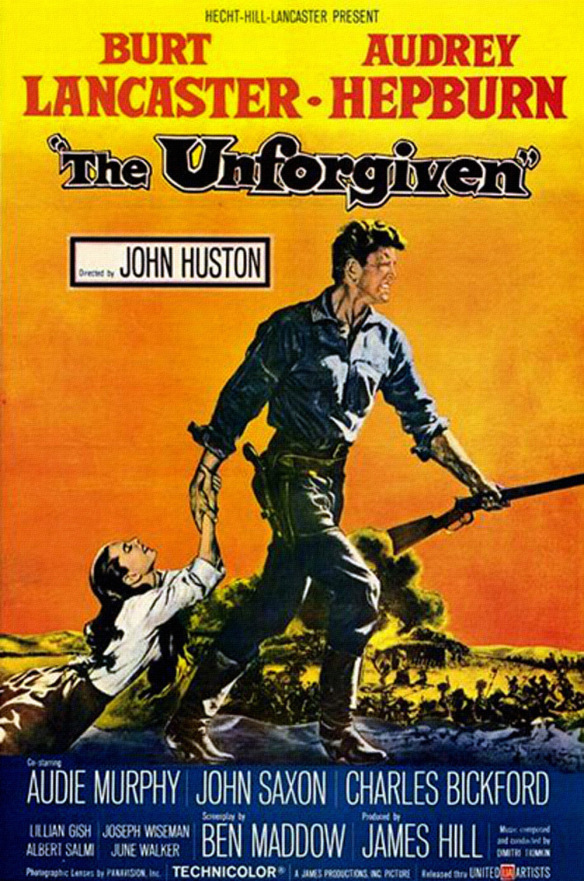 The Kino/Lorber company has been releasing rare & unusual films on home video for years, particularly those from the silent era. This year the company started a "Kino/Lorber Studio Classics" line which will release a number of MGM/United Artists titles. One of the latest is the off-beat 1960 Western THE UNFORGIVEN. Please note that this movie has nothing to do with Clint Eastwood's UNFORGIVEN, and it has nothing to do with any Metallica song either.

When you look at the credits for THE UNFORGIVEN you can't help but be impressed. It was directed by John Huston, and it stars Burt Lancaster, Audrey Hepburn, Audie Murphy, and a fine supporting cast. The film's screenplay was based on a novel by Alan Le May, the man who wrote the book that THE SEARCHERS was based on. THE UNFORGIVEN was made by Burt Lancaster's production company and it boasts a music score from Dimitri Tiomkin.

Despite all that THE UNFORGIVEN doesn't reach the heights of a major classic Western. The film revolves around the Zachary family--brothers Ben (Burt Lancaster), Cash (Audie Murphy), and Andy (Doug McClure), adopted sister Rachel (Audrey Hepburn), and their mother (Lillian Gish). The Zacharys are getting ready to drive a huge herd of cattle to market when a mysterious stranger (Joseph Wiseman) intrudes on their lives by telling the local community that Rachel is actually a Native American, taken from her Kiowa tribe during a raid. The Zacharys wind up having to fend off the Kiowas, who want Rachel back, and their neighbors, who want Rachel sent away.

John Huston doesn't show much love for the West in THE UNFORGIVEN. There's no natural beauty shown here--the landscape is parched and arid. All of the film's characters are presented as colorful, or odd (perhaps too much so). Huston is apparently suggesting that someone has to be a little bit off to even want to live in such a place.

It's hard for a viewer to to like the Zachary family--their stubbornness precipitates tragedy instead of solving it. Lancaster's Ben happens to be in love with Rachel--and I don't mean the brother-sister kind of love. Rachel's not really Ben's sister, but she been raised as a Zachary almost her entire life. Just about everyone in the film seems horrified at the fact that Rachel could be a Native American (including Rachel).....but the fact that Ben wants his adopted sister for himself doesn't rile up much of a fuss.

There's a lot of politically incorrect thoughts and deeds in this movie. Huston must have intended to show the racism that was prevalent in the era...but that racism is undercut by the Kiowas acting just like a typical Hollywood Indian tribe. The climax of THE UNFORGIVEN features the Kiowas laying siege to the Zachary homestead. It's a well-made sequence, but because of the attitudes of the characters it winds up being emotionally hollow.

Lancaster and Audrey Hepburn are very good here, but the most impressive acting comes from the supporting players. Audie Murphy is excellent, playing totally against type as the angry Cash. A very young John Saxon plays a charismatic horse wrangler who has eyes for Rachel. Saxon gets his own action sequence, and it seems that he is being set up to play a part in the movie's climax--but his character disappears from the last part of the film. Lillian Gish as the headstrong Zachary matriarch seems right out of a silent movie (for obvious reasons).  The actor who makes the biggest impression is Joseph Wiseman as the old coot who reveals Rachel's true origin. Wiseman played Dr. No, the very first James Bond movie villain--and if I hadn't told you that you would have never believed that the creepy codger and Dr. No were portrayed by the same man.

There's a lot of things to like about THE UNFORGIVEN, but it is the kind of movie you wish you were able to rewrite the script for. THE UNFORGIVEN winds up being a strange, dramatic Western that isn't as good as it should be.