One of the sub-genres of the World War One film is the "Forgotten Man" storyline--a movie dealing with the returning veterans of the Great War. The topic of the "Forgotten Man" cropped up in pictures such as GOLD DIGGERS OF 1933 and THE ROARING TWENTIES. The struggling World War One veteran was a major news story in the early 1930s, due to several of them being to reduced to homelessness or unemployment because of the Great Depression.

One of the most notable "Forgotten Man" films is HEROES FOR SALE, made in 1933. The director of HEROES FOR SALE was none other than William Wellman, the man who had helmed the Oscar-winning World War One silent epic WINGS. HEROES FOR SALE, however, is a far cry from the high-sky heroism of WINGS.

The plot of HEROES FOR SALE revolves around ordinary guy Tom Holmes, played by Richard Barthelmess. During the Great War Tom takes part in a daring raid behind enemy lines to capture a German officer. Tom is severely injured in the attack, and is captured. After the Armistice is announced, Tom is given morphine by his German doctor to help him deal with his pain. On the boat home Tom finds out that the man who led the raid, a banker's son from Tom's home town, took credit for Tom's actions and has become a hero. The fake hero begs Tom not to tell anyone, and once home Tom gets a job at the bank. His addiction to morphine unfortunately leads to Tom losing his job.

Tom is forcibly sent to a "narcotic farm" and is cured of his addiction, but without a job or any money, he has to go on the road. He winds up in Chicago, where he manages to get a job in a laundry. Tom soon marries a nice girl (the achingly beautiful Loretta Young), and gets a promotion...but his troubles are only beginning.

HEROES FOR SALE was made during the now-famous "Pre-Code" era...and there's no doubt that a couple years later this screenplay would have never seen the light of day. For the rest of the film Tom winds up stuck in one major crisis after another--and none of it is of his own making. Tom has to deal with so many things that one has to wonder why he doesn't just give up or go crazy. Apparently the message of HEROES FOR SALE is that Tom, and America, may take a few knocks, but they will carry on and prevail.

The problem with that message is that HEROES FOR SALE presents an America straight out of a nightmare. The America here is cruel and capricious, where any law-abiding citizen can have the rug pulled out from under them at any time. Tom's status as a veteran just seems to make him more of an easy prey--it's almost as if he is being punished for serving in the Great War. Toward the end of the film Tom is with a group of transients, trying to stay out of the rain. Tom starts talking about President Roosevelt's Inaugural Address--and just when you think that the movie is going to end on an optimistic note, Tom and his compatriots are rousted out of the county by vindictive law officers.

William Wellman directed a number of hard-hitting Pre-Code melodramas, but HEROES FOR SALE has to be one of the most striking. One could look at the movie as a far-left social statement--except for the fact that Wellman wasn't exactly a far-left guy (Wellman himself was a World War One veteran, and his life turned out pretty good). More than likely Wellman was given a script, and he did his best to make it as well as possible. What's really amazing about HEROES FOR SALE is that it is only 71 minutes long--it has more plot than a Christopher Nolan movie. HEROES FOR SALE moves....but it never seems sloppy or dashed together. 21st Century film makers could learn a lot by watching early 1930s Hollywood product (especially those made by Warner Bros., the studio behind HEROES FOR SALE).

The opening sequence, which deals with the raid that injured Tom, is a rain-soaked, muddy masterpiece....and it has nothing in common with WINGS. There's also a well-staged riot in the film, which features the movie's most shocking scene (I don't want to give it away, but even for a Pre-Code film, it's a wallop). No matter the plot or the situation, Wellman's films always have that extra something that distinguishes them from the work of other directors.

The very subject of the "Forgotten Man" is a bleak one...and HEROES FOR SALE has to be one of the most bleak "Forgotten Man" films of them all. Is it a call to help World War One veterans or just pure exploitation? All I can say is, if any prospective immigrants went and saw this movie back in 1933, they probably wound up to scared to want to set foot in this country. 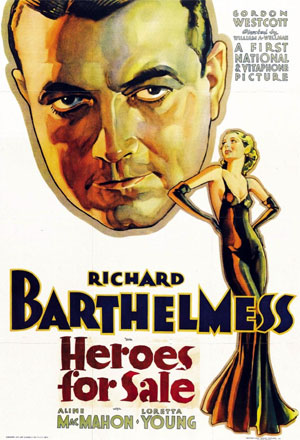 A rather deceiving HEROES FOR SALE poster
Posted by Dan Day, Jr. at 2:56 PM