In his autobiography HOW I MADE A HUNDRED MOVIES IN HOLLYWOOD AND NEVER LOST A DIME, Corman explains why he was drawn to the story of the Red Baron, Manfred von Richthofen. Corman felt that the Baron was the last true knight, an aristocratic warrior with a code of honor. Corman wanted to show how the Baron's way of thinking was archaic compared to the wholesale slaughter of World War One. Corman also wanted to contrast the Baron with the man who had been credited with shooting him down, Canadian RAF pilot Roy Brown. (Most historians now believe that the Red Baron was shot down by ground fire.)

Usually when a movie has two characters like the Red Baron and Roy Brown, the ordinary plain-spoken Canadian will be presented far more sympathetically than the upper-class German. But that isn't so in VON RICHTHOFEN AND BROWN. Corman turns the tables and has the Baron (played by John Phillip Law) be the true hero of the film. Roy Brown (played by Don Stroud) comes off as standoffish and distant (I don't know what any of Brown's family thought of the movie, but I'm sure they couldn't have been too pleased). Law's charismatic von Richthofen is far more appealing than Stroud's surly Brown.

The movie's screenplay plays fast and loose with the real events, despite having many real-life characters such as Hermann Goering, Ernst Udet, and Anthony Fokker. (Fokker, by the way, is played by Dorian Gray himself, Hurd Hatfield.) Corman isn't really interested in historical fact--he just wants to set up his theme that World War One was the first "modern" war, the first war in which carnage was taken to an industrial level. (This theme is a common one in WWI films--but the theme could be used for a movie about any historical war, when you think about it.) As the story progresses, the pilots on both the German and Allied sides go from battling each other in one-on-one duels to strafing hospitals and killing ground personnel. (I'm sure the fact that this movie was made during the Vietnam era had a lot to do with Corman's portrayal of modern war.)

John Phillip Law cuts a dashing figure as the Red Baron. What makes Law's film career unique is that almost every movie he starred in has a major cult reputation--among Law's credits are such titles as BABARELLA, DANGER: DIABOLIK, DEATH RIDES A HORSE and THE GOLDEN VOYAGE OF SINBAD. Don Stroud was best known for playing villains, which is another reason why Roy Brown seems so unlikable. Stroud as Brown seems more like a disaffected 1960s American than a WWI-era Canadian RAF officer.

Roger Corman had way less money--and way less time--to shoot the flying sequences for this film than the producers of THE BLUE MAX did. Despite that, the aerial scenes are just as good, or in some ways better. Corman will always be known as a B-movie/exploitation king, but he really was a very underrated director--almost all of his films are fast-moving and entertaining, and he could handle just about any genre. VON RICHTHOFEN AND BROWN is certainly not a very historically accurate film--it's more like historical melodrama--but it is worth a look. If you want to find out about the real Red Baron and Roy Brown, you're better off reading a book on those men. 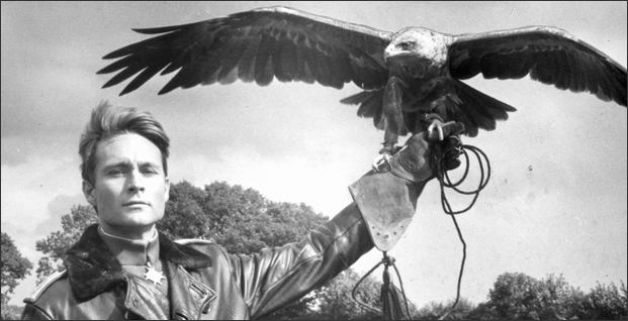