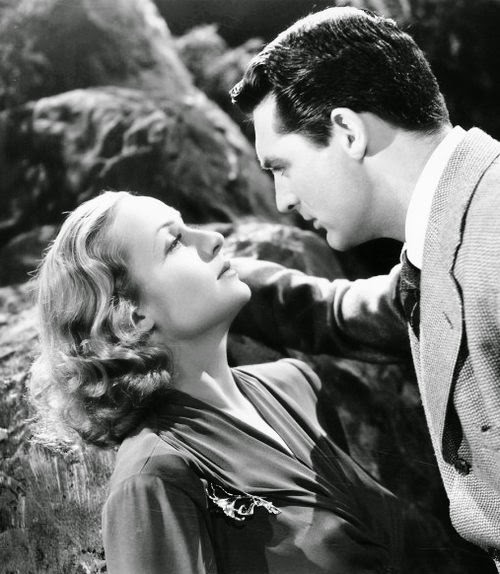 Last New Year's Eve I wrote a blog post about a movie which has a climax set during that holiday, MADE FOR EACH OTHER. That film starred Carole Lombard and James Stewart, and it was directed by John Cromwell. With Christmas coming up, this blog post is about a movie set during that holiday--and it also stars Carole Lombard and a major male star, and it was also directed by John Cromwell. The movie is IN NAME ONLY.

IN NAME ONLY was in fact Carole Lombard's next film after MADE FOR EACH OTHER. Produced by RKO and released in 1939, the movie teams up Carole with none other than Cary Grant. Lombard and Grant both appeared in two earlier films, SINNERS IN THE SUN and THE EAGLE AND THE HAWK, but IN NAME ONLY is the only real time they were an on-screen couple. If any two performers were made to be in a romantic comedy together, it was Lombard & Grant. Unfortunately IN NAME ONLY is a sluggish melodrama about marital problems.

Alec Walker (Cary Grant), a man stuck in an unloving marriage, happens to meet widow Julie Eden (Carole Lombard). (Alec just happens to be riding a horse and sees Julie fishing....typical, huh?) Alec and Julie are attracted to each other right away, but Alec's wife Maida (Kay Francis) married Alec because of his rich family, and she's not about to let her comfy lifestyle and social position go away easily.

One complication follows another, but eventually Alec convinces Maida to grant him a divorce....or so he thinks. Maida tells Alec that she will give him one after she goes on a trip to Europe with Alec's snooty parents. Alec and Julie make plans, but as the weeks go by Alec continues to be put off by Maida who is still abroad. On Christmas Eve Alec and Julie get set to celebrate with Julie's young daughter, but Maida and Mr. and Mrs. Walker arrive without warning. What follows is a confrontation between Alec, Julie, and Maida, in which Maida announces she will never go for a divorce. Maida also threatens to sue Julie for alienation of affection, and she says she will even force Julie's daughter to testify during any trial.

After this Alec and Julie are devastated. Alec gets drunk, and winds up spending the night at a cheap hotel where he (gasp!) leaves the window open. In one of those old movie complications that people who don't like old movies like to make fun of, Alec winds up getting deathly sick. Now in the hospital on Christmas Day, Alec seems to have lost the will to live, and Julie is brought in to see him. In another of those old movie complications, everything gets wrapped up in literally the last two minutes, due to Alec's parents overhearing Maida telling Julie how much she wants the Walker family money.

IN NAME ONLY does not hold up very well today due to 21st Century attitudes toward relationships. Today Alec and Julie would just do whatever the heck they wanted....but they certainly couldn't do that in a movie made in 1939. The script bends over backward to make the audience like Alec and Julie and despise Maida...so much so that all three characters wind up somewhat one-dimensional. Alec and Julie are too straight-arrow--Alec is a rich guy who works in his family's New York office (even though we are never told, and we never see, what he exactly does), and Julie is a successful fashion designer who appears not to be affected one bit by being widowed with a young child. (As a matter of fact, Julie only mentions her late husband once, when she first meets Alec. She never refers to the poor guy again for the rest of the film--if I ever get married and kick the bucket, I hope my widow will have stronger memories of me.) It would be more interesting if Alec and Julie had some complexity to them, such as maybe not being so well-off financially. But one has to remember that in 1939 divorce was still considered a bad thing, and if Alec or Julie had been more working class audiences of the time might not have been too sympathetic to them.

Kay Francis is very believable as the venal Maida--maybe the reason she's so mean is because Francis used to be a bigger star than Carole Lombard (if the movie had been made in 1933, Francis would have played Carole's role). Charles Coburn plays Alec's disapproving father, and the role is almost the same as the one Coburn played in MADE FOR EACH OTHER--James Stewart's disapproving boss.

Carole Lombard and Cary Grant work very well together, but this is the wrong type of film for them to be co-stars. Lombard spends a lot of time crying here, and Grant spends most of his time looking pensive--and that's before he's stuck sick in bed for the last twenty minutes of the story. If Lombard and Grant had not been in this picture, it would be very difficult to watch--even at only 94 minutes, the movie has a tendency to drag.

IN NAME ONLY has a lot in common with MADE FOR EACH OTHER--female lead, director, a holiday setting, and a miraculous (and far-fetched) ending. Carole Lombard and Cary Grant were two of the most appealing personalities to ever grace the silver screen--but IN NAME ONLY does not take advantage of those personalities. That's definitely not in the holiday spirit.