The 75th Anniversary Of GONE WITH THE WIND 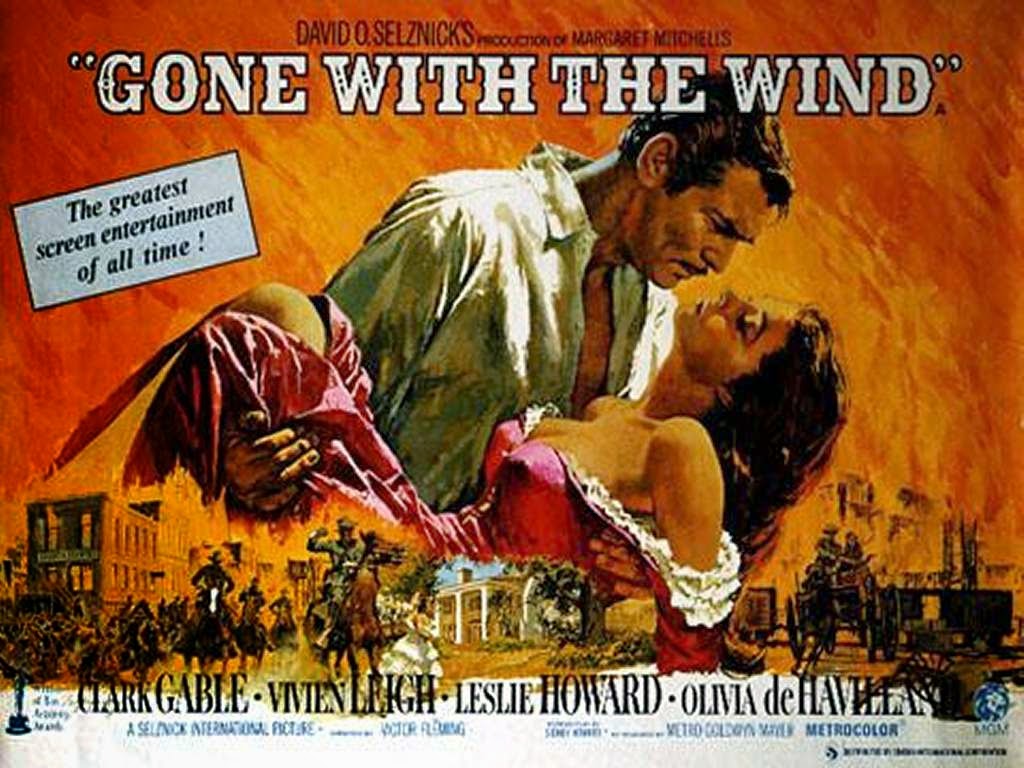 On this day exactly 75 years ago, the movie GONE WITH THE WIND had its gala premiere in the city of Atlanta, Georgia. GONE WITH THE WIND is probably the most famous American movie ever made. Even folks who don't like "old movies" have seen it, or are at least well aware of it. The movie's reputation has continued to grow over the years. Right now you can go out and get a brand new Blu-ray GONE WITH THE WIND box set, or go down to your local supermarket and buy a special Time-Life magazine concerning the film.

If you ask someone who is not a major movie buff what is the greatest movie ever made, chances are that person will say GONE WITH THE WIND. I think the reason for that has to do with how Ted Turner and his minions promoted the film in the 1980s and 90s. Whenever GWTW was shown on either TBS, TNT, or TCM back then, it was always hyped up as a major event, and it was always referred to as the greatest film ever--so much so that most of the general public starting assuming it was the greatest film ever made.

GWTW is a great film....but I believe it is more of a great film achievement. David O. Selznick pulled out all the stops to produce an adaptation of Margaret Mitchell's Civil War-era novel. (I have not read Mitchell's book, by the way.) You can't helped but be impressed when watching GWTW...it is a story told on a massive scale, clocking in at nearly four hours long. Multiple directors and screenwriters were used, and what saves the final product from being a convoluted mess is the production design of William Cameron Menzies, a man who does not get enough credit for the overall success of GWTW.

Having said all that, I'm kind of amazed that GWTW still has such a major following. The story is about as politically incorrect as you can get. We live in an age where every five minutes someone is going all over social media complaining about something that offends them--and GWTW features a group of characters from the mid-19th Century slave-holding American South. The movie's supposed status as the presumed "greatest movie ever made" has seemed to deflect any major cultural backlash. I'm not offended by the movie personally....but every time I watch it I'm thankful that my ancestors fought for the Union.

The other major reason I'm surprised that GWTW endures is that it's what used to be called a "woman's picture". (How that's for political incorrectness?) GWTW is a soap opera, plain and simple--especially in the film's second half. Most big-time money making epic films appeal to 10 to 60 year old males. GWTW is the most majestic chick flick ever made. Yes, it is set during the Civil War, but there are no battle scenes--we see the effect and the aftermath of war. The most violent thing we see is Scarlett O'Hara shooting a Union straggler in the face.

And here's something else about GONE WITH THE WIND: the lead character is a spoiled narcissist. Scarlett O'Hara is the type of woman that I would have no interest in whatsoever in real life. I find Olivia de Havilland as Melanie to be far more appealing...when Rhett Butler tells Melanie that she's one of the bravest women he's ever known, he's absolutely right. (One of my pet theories about GWTW is that Rhett has a secret crush on Melanie.)

Don't get me wrong, I'm not knocking Vivien Leigh's performance as Scarlett. She's magnificent in the role, and it is to her credit that she can take someone as unlikable as Scarlett and make the audience interested in her for nearly four hours. One of the many legends of GWTW is David O. Selznick's search for the right actress to play Scarlett. Looking back from today, it seems unthinkable that any other woman could play Scarlett O'Hara other than Vivien Leigh.

I've actually seen GONE WITH THE WIND in a real theater. The showing was in the late 1980s at the Morris Civic Auditorium in downtown South Bend, Indiana. The biggest memory I have of that is the crowd's reaction of Leslie Howard as Ashley Wilkes. As soon as Howard came onscreen for the first time, there was a low grumble among the audience....a grumble that got worse and worse for the rest of the film whenever Ashley appeared. Ashley Wilkes has to be the most disliked character in American movie history. That's not the fault of Leslie Howard....no actor could make the insipid Ashley look good--heck, Clark Gable couldn't have made Ashley look good. Poor Leslie Howard was a fine actor in his own right, and he died as a result of the plane he was in being shot down by the Luftwaffe--but he will forever be remembered as the "honorable" Ashley Wilkes. Howard deserves better than that.

Most people have the general impression that Clark Gable won the Best Actor Oscar for GWTW (he didn't...Robert Donat won it for GOODBYE, MR. CHIPS). Clark Gable and Rhett Butler are about as perfect a match as you can get between actor and role. Gable and Leigh are one of the all-time movie romantic couples, but let's not forget the supporting cast. The fact that GWTW is almost four hours long allows many of the minor players a chance to shine. One of classic Hollywood's major assets is the wealth of talented character actors that worked in the industry. GWTW is filled with them--Thomas Mitchell, Barbara O'Neil, Harry Davenport, and of course Hattie McDaniel and Butterfly McQueen. For my money it is Ona Munson as Belle Watling that steals the show--her closeup as Rhett tells her about his problems with Scarlett is one of the movie's best moments.

While I don't think GONE WITH THE WIND is the greatest movie ever made, I have to say it is a stupendous achievement on the part of David O. Selznick. I watched the movie again over the weekend in preparation for this blog, and the thing about GWTW is that once you start watching it, you have to watch it the whole way through....even if you've seen it dozens of times. GONE WITH THE WIND, the film, is an American treasure.
Posted by Dan Day, Jr. at 1:49 PM