THE QUATERMASS XPERIMENT On Blu-ray From Kino 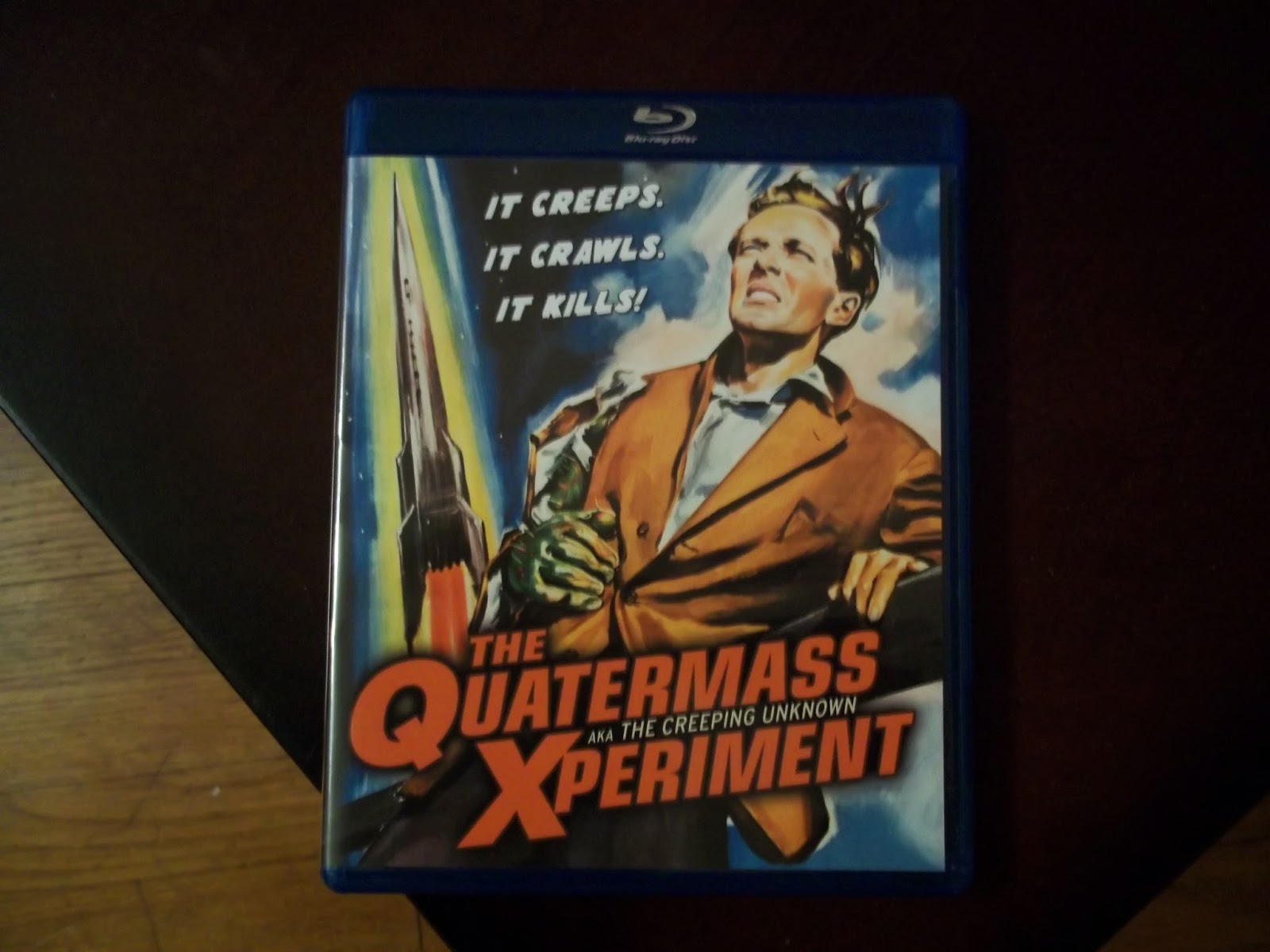 THE QUATERMASS XPERIMENT (known as THE CREEPING UNKNOWN in the U.S.) is one of the most important science fiction/horror films ever made. It is the true beginning of Hammer Horror, and the movie's plot about a space traveler returning to earth suffering from alien contamination has been "borrowed" by various films and TV shows ever since.

THE QUATERMASS XPERIMENT is based on a popular BBC TV serial written by Nigel Kneale. Britain's Hammer Films had already adapted a number of radio shows to film, and Kneale's story seemed promising enough to make into a feature. Director Val Guest was tapped to make the movie in 1954, and despite its low budget THE QUATERMASS XPERIMENT became a huge success, inspiring Hammer to make other science fiction projects, which would soon lead to the company taking on the genre of Gothic Horror.

The main reason THE QUATERMASS XPERIMENT is still effective today is due to Guest's documentary-like style in covering the events in the script. The low-key black & white photography, aided by filming on several outdoor locations, gives QUATERMASS a different look to most science fiction films of the same period. The story plays out more like a detective tale instead of a far-out thriller. Clocking in at 82 minutes, Guest keeps the pace up throughout and doesn't waste time on any filler.

Brian Donlevy, the actor who plays the role of Professor Quatermass, perfectly suits the mood Val Guest was aiming for. Most "good guy" scientists of early 1950s cinema were either kindly elderly types or stalwart leading men. Donlevy's Quatermass is a no-nonsense, blue-collar type of Professor. Dead serious and with no sense of humor, Donlevy's attitude somewhat anticipates how Peter Cushing's Baron Frankenstein would act in future Hammer productions. Quatermass continually berates and interrupts people, demands to have his way at all times, and has no respect for any type of authority (even though he himself is trying to assert authority over everybody else). THE QUATERMASS XPERIMENT is made all the more believable due to Donlevy's performance--he acts so determined that you totally buy into the plot. I've never seen the original BBC TV production of this story, but I know from numerous sources that Prof. Quatermass was played very differently on television. Author Nigel Kneale was horrified by Donlevy's portrayal (which is understandable, since he created Quatermass), but I like it a lot (most American viewers appreciate Donlevy's Quatermass more than most British viewers do).

The other actor who makes a huge impression in this picture is Richard Wordsworth as Victor Caroon. The only one of three astronauts who come back alive from the space mission masterminded by Quatermass, Wordsworth's gaunt face and staring eyes make Caroon an unearthly figure. Even though Caroon has lost the ability to speak, Wordsworth is able to transmit to the audience the man's pain and suffering. Wordsworth is both pitiful and frightening--many have compared his performance to that of Boris Karloff's in the 1931 version of FRANKENSTEIN. An encounter that the on-the-run Caroon has with a little girl (played by a very young Jane Asher) accentuates the comparison. I've always though that the best movie monsters need to have a recognizably human element in them, and Richard Wordsworth memorably defines this idea.

There are many other highlights in THE QUATERMASS XPERIMENT, such as the opening scenes, which depict the aftermath of Quatermass' rocket crashing in a field. In these scenes Hammer fans will get several glimpses of the village of Bray, and the area surrounding Bray Studios. A Val Lewton-esque sequence set in a zoo is very well done, and the film's climax features a now-totally transformed Caroon/creature trapped inside Westminster Abbey. After the story's resolution, Quatermass strides purposely out of the Abbey, tells an assistant that he's going to start on a new rocket project, and walks away down the street, not even bothering to look back. Sure enough, film audiences would see Donlevy again in Hammer's QUATERMASS 2, which many monster movie fans think is even better than XPERIMENT.

I have to mention James Bernard's music score. This was the composer's first work for Hammer, and you would think after watching the film that Bernard had been writing soundtracks for sci-fi and horror films for years. Bernard's score gives the movie a suspenseful tone right from the beginning of the main titles. James Bernard would go on to be one of the most important figures in the Hammer Films production team.

THE QUATERMASS XPERIMENT was released on a bare-bones DVD-R by MGM a couple years ago. This new Kino Region A Blu-ray is in 1.66:1 anamorphic widescreen, and the picture quality is fine, if a bit grainy. The Blu-ray has various extras--most of them were prepared a decade ago for a planned DVD release of the film as part of MGM's "Midnite Movies" series. The newest extra is a ten-minute interview with John Carpenter in which the filmmaker discusses his admiration for QUATERMASS. There's two short featurettes--one goes into the making of the film, and the other compares the differences between the British and American versions of QUATERMASS. (This Blu-ray has the full 82 minute British version). There's a short interview of Val Guest by Hammer Films historian Marcus Hearn, and both men participate in an audio commentary. A "Trailers From Hell" episode with Ernest Dickerson, an original American trailer, and the alternate American main title sequence round out the package. (The title of this movie was changed for America mainly because the name "Quatermass" didn't mean anything in the U. S. at the time.) 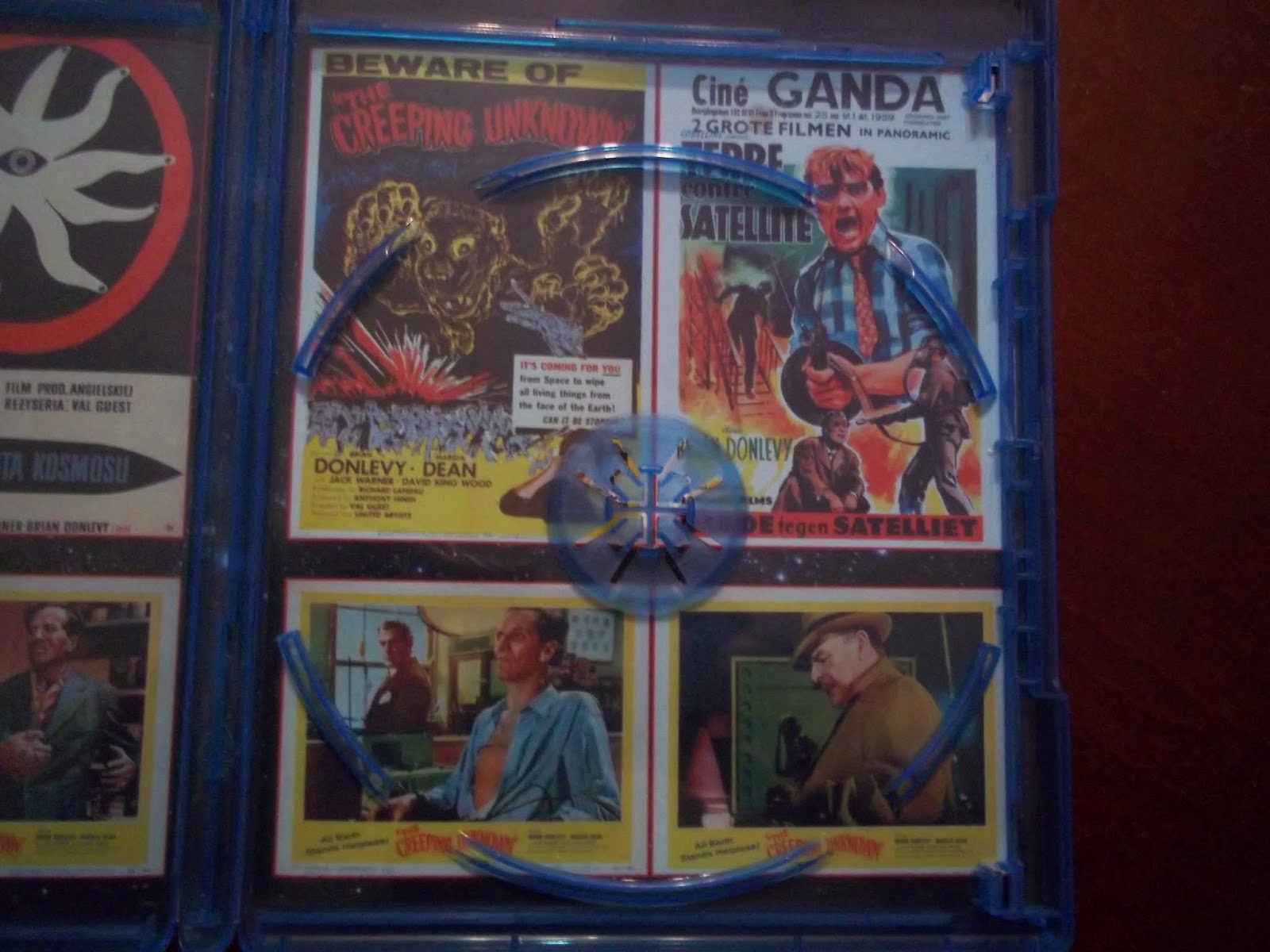 The inside of the disc case features images of posters for the film....but look at the top right picture--it's a foreign poster for QUATERMASS 2!!

It's good that Kino has released THE QUATERMASS XPERIMENT on Region A Blu-ray...but one wishes that some brand new commentaries and featurettes were created to fully explain this film's importance in the history of fantastic cinema.