My Five Favorite Baseball Movies Of All Time

This is my 400th blog post. I can't believe I've written 400 of these things--I sometimes wonder if it's even worth it, but apparently there are a few folks out there who appreciate my humble efforts. Since this will be #400 I decided to do something special with it.

About the only thing I love more than movies is baseball. With the beginning of the 2016 Major League baseball season upon us, now is as good a time as any to list my five favorite baseball movies. The problem with this particular list is that I am such a baseball fan I will be a lot less forgiving over the typical baseball film than someone who knows little about the game would be. I'm not that much of a big sports movie fan period. It occurs to me that people who are not sports fans love sports movies way more than guys like me do. In my opinion there's no way a filmed production can recreate the unpredictable drama that comes from attending or watching a live sporting event. If you go to 100 different baseball games you'll never know what you'll see or experience, whereas if you see 100 different baseball movies you'll come upon the same plot contrivances over and over again. A filmed story for a mainstream audience has to follow certain patterns in script construction and character development, and that is why the "inspirational sports movie" genre is so predictable. The underdog overcoming great odds, the slow-motion action sequences, the main character's friends and loved ones cheering from the stands--I could write a "inspirational sports movie" in my sleep.

I submit that making a baseball movie is more difficult than the typical sports film, because baseball is a very complex sport (although most people wouldn't credit it as such). To those who are not aficionados of the sport, baseball looks deceptively easy. When it comes to accurately reproducing baseball on the screen, there's thousands of details filmmakers have to deal with (and if the story is a period piece, that means thousands of details more). The result of this complexity is a spate of movies that dumb down the sport, or use baseball as a setting for cheap comedy. There was a whole series of these types of baseball movies that came out in the late 1980s-early 1990s--movies like MAJOR LEAGUE, LITTLE BIG LEAGUE, ANGELS IN THE OUTFIELD, ROOKIE OF THE YEAR, etc. These movies are entertaining in a generic sort of way, but I wouldn't call any of them great representations of baseball.

Here's my five favorite baseball movies, in order of preference.

1. THE BAD NEWS BEARS (1976 version)
Yes, this is my pick as the greatest baseball movie of all time. I wrote a full piece on this movie, and its sequels, in the Spring of 2013. This movie has a personal connotation for me--it's about the closest any film has come to recapturing my childhood (I actually played Little League baseball in the late 1970s--and I was terrible). Despite this movie's reputation as a wild & wacky look at the American Pastime, today it looks like a documentary compared to the ridiculous comedies that have been released in the 21st Century. I've said it before and I'll say it again--if you want to know what 1970s America was really like, watch the original THE BAD NEWS BEARS.

2. FIELD OF DREAMS
Of course this is not so much a baseball movie as it is a metaphor about life. What makes this film great is the idea of building a real baseball field in your own backyard, and the "People Will Come" speech performed by James Earl Jones (which still gives me chills every time I hear it). Unfortunately most people's ideas about the 1919 Black Sox Scandal come from this movie--you really shouldn't get your information on a historical event from a story that features ghosts. (For example, Ray Liotta as Shoeless Joe Jackson bats from the wrong side--did Shoeless Joe learn how to switch-hit in Heaven?) But you can't deny the emotional power the climax of the film has when Kevin Costner gets to play catch with his late father.

3. THE NATURAL
This is a movie that took me multiple viewings to fully appreciate. When I first saw it as a teenager in the mid-80s, I thought it was unbelievably over-the-top. It took me a while to realize that it is supposed to be over-the-top--it is baseball mythology. The one thing that isn't over-the-top is the fantastic 1930s production design--if you want to know what Major League baseball looked like back in the Thirties, watch this movie (There are still people who think the New York Knights was an actual franchise!). THE NATURAL also features magnificent cinematography by Caleb Deschanel, and one of the best music scores ever, by Randy Newman.

4. THE STRATTON STORY
As a White Sox fan, I have to admit to a certain bias for this production. James Stewart plays real-life White Sox pitcher Monty Stratton, who at the height of his baseball career lost his leg in a hunting accident. The movie details Stratton's attempts at a comeback, backed by the support of his loving wife (June Allyson). The movie is a somewhat simplistic version of Stratton's life, but it is warm and entertaining, and James Stewart has the right look and body language of a Major League ballplayer. (How important is that? Well, plenty of baseball movies have been ruined because members of the cast just didn't look proper in a uniform. Case in point: FEAR STRIKES OUT, where Anthony Perkins tries to play Jimmy Piersall....but the actor looks silly as a ballplayer--it's fairly obvious he never held a baseball bat in his life.) Real-life White Sox manager Jimmy Dykes plays himself--and he's so good, he might have carved out a career as a character actor if he had chosen to do so. 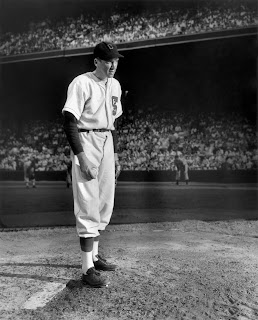 
5. THE PRIDE OF THE YANKEES
This is probably the most famous classic baseball movie of all time--producer Samuel Goldwyn's big-time biopic of New York Yankees legend Lou Gehrig, one of the greatest players who ever lived. Only Gary Cooper could have played this role, despite the fact that he wasn't baseball savvy himself. Like THE STRATTON STORY, this too is a simplistic version of Gehrig's story--hopefully the next time you see this film you go out of your way to read something about the real Gehrig. The best part of this movie is the production design by the famed William Cameron Menzies.


I'm sure a lot of you wondering why some famous baseball movies are not on this list. BULL DURHAM? Yeah, it's funny on first viewing, but it don't think it holds up very well--Susan Sarandon's role is more of a "movie person" than someone who would exist in real life. I also think A LEAGUE OF THEIR OWN doesn't hold up all that well either. That movie tries to put over the idea that there wasn't any Major League baseball during World War II, when there most certainly was. MONEYBALL should have been called "Brad Pitt Saves Baseball All By Himself"--it's another baseball movie that waters down the facts.

If you really want to experience the beauty and majesty of baseball, don't watch a movie or a documentary about it--go to an actual baseball game, and sit in the stands.

And while you're at the game....put away your damn cell phone.