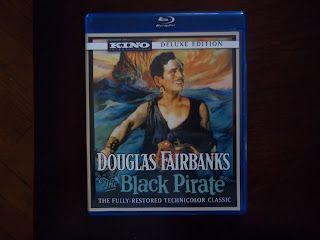 Recently I took the opportunity to purchase the Kino Blu-ray of Douglas Fairbanks' THE BLACK PIRATE for only $7. It's one of my best home video deals, since the disc is jammed pack with extras and the movie itself is a grand adventure of the high seas.

When Douglas Fairbanks made THE BLACK PIRATE, he attempted to make the ultimate pirate movie. Instead of filming an adaptation of an existing story, Fairbanks came up with an original tale that featured as many of the classic elements of pirate lore as possible--swordfights, duels, buried treasure, walking the plank, etc. THE BLACK PIRATE also allowed Fairbanks to show off his amazing athletic prowess and his one-of-a-kind screen presence.

The story starts off with a group of blood-thirsty pirates attacking a ship and murdering the ship's crew. There is one survivor, however--a mysterious fellow played by Fairbanks who winds up not only gaining the pirates' confidence, but also becoming leader of the group. It is all a ruse, though, to allow Fairbanks to wipe the pirates from the seas, and save a beautiful princess (played by Billie Dove) in the bargain. At the end the true identity of Fairbanks is revealed.

Not only did Fairbanks want to make the ultimate pirate movie, he wanted it to look far different than any other pirate film. Fairbanks' production company came to the decision to film the story in two-strip Technicolor, a rather novel idea at the time. This process still did not photograph all the colors of the spectrum, which resulted in a unique, almost artistic look. When one watches THE BLACK PIRATE today, the somewhat faded two-strip Technicolor makes the movie feel as if it had really been made in the 1600s--it's like viewing a series of old paintings come to life.

Fairbanks also spared no expense when it came to the production design of THE BLACK PIRATE, building replica ships and filling sets with all sorts of period detail.  Despite all the wild daring-do. THE BLACK PIRATE certainly looks authentic, as do the dozens of background actors who make up the pirate ship's crew. In later years the typical Hollywood buccaneer picture would usually have a generic style to it, but that isn't to be found in THE BLACK PIRATE.

Douglas Fairbanks gives himself several chances to shine here, and why not? His best sequence by far is the one where he takes over an entire ship all by himself, highlighted by Fairbanks using a knife to slice himself down the length of the ship's sails (a trick still impressive even in the 21st Century CGI age). When it comes to personal vitality and physical acting ability, Fairbanks had very few peers--he's the best special effect in THE BLACK PIRATE.

THE BLACK PIRATE is fun and exciting, but it is also surprisingly grim in some spots. Many of the pirates have individual humorous eccentricities, but the story goes out of its way to show that these bandits have no qualms when it comes to killing people.

Kino's presentation of THE BLACK PIRATE is taken from a 35mm negative of the two-strip Technicolor print, mastered in high definition. The color certainly isn't vibrant, but just seeing a 1926 silent film in this manner is more than worth it. A black & white version of THE BLACK PIRATE is also included on this disc. This version was produced by Douglas Fairbanks Jr., and features Doug Jr.'s narration instead of intertitles (Doug Jr. gives away the Black Pirate's true identity at the start of the film). An excellent audio commentary by film historian Rudy Behlmer is included. Behlmer gives all the pertinent details about the making of THE BLACK PIRATE that one would need, such as the amount of test shooting was done to make sure the two-strip Technicolor process would work correctly. Behlmer also reminds the listener that Douglas Fairbanks wasn't just a great silent star--he was a great filmmaker in his own right (Albert Parker is credited as director of THE BLACK PIRATE, but Fairbanks oversaw all aspects of the production, as he would on almost all of the films he starred in).

There are other extras on the disc, such as 47 total minutes of outtakes, 18 of them narrated by Rudy Behlmer. The outtakes give a fascinating and rare look at the actual making of an epic silent film. There's also a photo gallery, and the viewer can choose between two different music scores for the film: the original 1926 score written by Mortimer Wilson, and performed by an orchestra conducted by Robert Israel, and a organ score performed by Lee Erwin.

I got this Blu-ray of THE BLACK PIRATE for $7 from Edward R. Hamilton Booksellers. Even at full price this disc would be worth it. The movie is a magnificent tale of high adventure on the open seas, and a testament to the brilliance and artistry of Douglas Fairbanks.