THE BLACK SLEEP On Blu-ray

THE BLACK SLEEP (1956) is another one of those "monster rally" movies which feature several performers known for their horror film roles. Unfortunately most of the "Horror All-Stars" outings (such as SCREAM AND SCREAM AGAIN and HOUSE OF THE LONG SHADOWS) never live up to expectations, and neither does THE BLACK SLEEP.

THE BLACK SLEEP is something of a rarity, in that it was a Gothic thriller set in the 19th Century and produced in mid-1950s America. By that time almost no one in the U.S. was making traditional horror films--science-fiction was the genre of choice. Producers Aubrey Schenck and Howard W. Koch decided to not only make an old-fashioned chiller, but to also hire as many old-fashioned chiller actors as they could. The result was a cast that included Basil Rathbone, Lon Chaney Jr., John Carradine, and Bela Lugosi. Schenck and Koch tried to get Peter Lorre as well, but were unable to do so. Character actor Akim Tamiroff was given the role earmarked for Lorre, and later-day cult icon Tor Johnson got a part. The producers hired Reginald LeBorg to direct, since LeBorg had worked on a number of Universal monster movies in the 1940s.

Basil Rathbone plays a mysterious scientist named Dr. Cadman who is seeking a cure for his wife's brain tumor. This requires Cadman to experiment on the brains of unwilling patients, turning them into freaks and mutants. The doctor blackmails a younger surgeon (Herbert Rudley) into helping him, but the surgeon is so put off by the doctor's experiments he winds up bringing about Cadman's downfall.

With a stellar cast and a director that one assumes would be perfect for the material, THE BLACK SLEEP still winds up being something of a disappointment. There's more talk than action in the story, due to Rathbone and Rudley having long discussions about everything that Rathbone is planning to do. Neither Chaney Jr. or Lugosi have any lines--Lon is reduced to one of his "Evil Lenny"-type roles, and poor Bela, who would die months after being in this film, is noticeably in very bad shape. (Any monster movie fan worth his or her salt has heard about the several wild stories surrounding Bela and THE BLACK SLEEP, especially the movie's infamous publicity campaign. These stories are so well known that commentator Tom Weaver goes out of his way to state that he won't even go into them!) John Carradine and Tor Johnson don't show up until the very end, and while Carradine at least gets to act like a wild man, Tor just wanders around looking menacing. Akim Tamiroff tries very hard to be like Peter Lorre, but his character is more annoying than dangerous. It doesn't take much for Basil Rathbone to run away with all the acting honors here. He may have felt that this type of picture was beneath him, but he takes everything on-screen with a deadly seriousness. (He also brings to mind Sherlock Holmes in the beginning of the story when we see him wearing a top hat and a black suit and frock coat.)

THE BLACK SLEEP does have some interesting elements to it, especially if one considers it within the context of Hammer's THE CURSE OF FRANKENSTEIN, which came out the very next year. In his audio commentary Tom Weaver points out a number of plot similarities between THE BLACK SLEEP and the ground-breaking Hammer film. Both movies feature a driven, ruthless scientist who will stop at nothing to reach his goal. THE CURSE OF FRANKENSTEIN is now legendary for its operation scenes in color. THE BLACK SLEEP is in black & white, but Rathbone is shown cutting into a brain, before Peter Cushing ever did it. The laboratory scenes of THE BLACK SLEEP can't help but remind you of the later Hammer Frankenstein outings--we see a close-up of Rathbone's determined face, while his off-screen hands are cutting into a skull, and his younger associate looks on in uneasy admiration. A similar set-up to the one that I've just described can be seen in almost every one of Peter Cushing's Frankenstein films. Hammer fans may not like to admit it, but THE BLACK SLEEP in many ways anticipates the Gothic horror wave of the late 1950s-early 1960s. 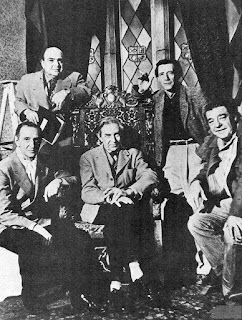 Kino Lorber, under their Studio Classics line, has put out a fine version of THE BLACK SLEEP on Blu-ray. The picture is in 1.85:1 widescreen and the visual quality is excellent. As mentioned, monster movie historian Tom Weaver provides a new audio commentary. It is always a treat to hear Weaver talk about an older horror film. You may not agree with all of his opinions, but he never fails to be entertaining and informative--he's one of the best home video commentators around. In the latter part of the film Weaver takes a break and lets film music expert David Schecter take over for about 15 minutes. Schecter discusses the movie's music score by Les Baxter--or should I say the score credited to Baxter, because Schecter mentions various claims that the composer may not have written some of the scores attributed to him. I have to admit that I did not know there was a controversy over Les Baxter's many credits, and after listening to Schecter I certainly now think of Baxter in a new light. A "Trailers From Hell" episode featuring THE BLACK SLEEP is also included, with Joe Dante talking about the movie.

THE BLACK SLEEP is more intriguing for its notable cast than entertaining as a film. Still, if you are an old monster movie fan, you can't help but be impressed by a production that has a scene where Basil Rathbone, Lon Chaney Jr., John Carradine, and Bela Lugosi are all on the screen at the very same time!