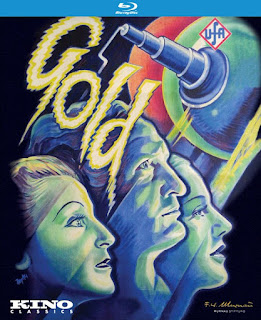 Kino Lorber has released on Blu-ray the 1934 German science-fiction drama GOLD. What makes this film important for movie geeks is the fact that it features Brigitte Helm, the legendary star of Fritz Lang's METROPOLIS...and you get to hear her speak!

GOLD concerns the attempts of German scientist Professor Holk (Hans Albers) to transform common lead into gold, through a process known as atomic fracturing. Holk is working on the project with his mentor Prof. Achenbach, when a saboteur destroys their fracturing machine. Achenbach is killed in the explosion, while the severely injured Holt is saved by a blood transfusion from his finacee (Lien Deyers). Holt recovers, and is given an offer to work again on atomic fracturing for a British millionaire named Wills. Holt accepts, because he is convinced that the millionaire was behind the sabotage of his earlier experiments. This time Holt wants to do the sabotaging--but once he gets a look at the fantastic underground fracturing plant built by Wills on the coast of Scotland, the scientist believes he just might be able to achieve his goal of manufacturing gold.

GOLD is more of a stately, thoughtful film than an out-and-out thrilling sci-fi tale. Holt's determination to turn lead into gold stems from trying to prove the theories of his late mentor Achenbach than from any quest for monetary success. At 117 minutes, GOLD  has a very languid pace to it, and those viewers expecting any wild German Expressionistic flights of fancy will be disappointed. Hans Albers was a huge star in Germany during the late 1920s-early 1930s, but in this movie at least, he doesn't have what you would call a dynamic personality. He seems to me more of a character actor-type than a big-time leading man.

The female stars of GOLD will be of more interest than the leading man. Brigitte Helm plays the daughter of British billionaire Wills, and she's decked out in some rather exotic costumes. Helm's character is set up as something of a society playgirl, but she becomes quite intrigued with Prof. Holt (although there isn't really any reason why she should). Helm achieved her fame in the silent era, but in GOLD she shows she acquitted herself rather well to the era of sound. Helm cuts a glamorous figure here, and it's a shame there wasn't more for her to do in the film. (I do have to say that in no way was I ever convinced Helm was a rich Englishwoman.)

The other main female role in GOLD is that of Holt's very pretty (and very young) fiancee, played by Lien Deyers. Film buffs will remember Deyers for her role as the devious femme fatale in another Fritz Lang silent epic, SPIES. Deyers, just like Brigitte Helm, gives a very opposite performance in GOLD than the one she did for Fritz Lang. Deyers is totally devoted to Holt, despite the fact that Holt appears old enough to be her father.

The real star of GOLD is the giant atomic fracturing machine built by Wills. It is a magnificent set--so magnificent, in fact, much footage of it was used nearly twenty years later in the sci-fi movie THE MAGNETIC MONSTER (which Kino has also released on Blu-ray). Of course, a set like this calls out for a massive destruction scene, and we get it in spades.

GOLD was produced by the legendary German UFA film company, and it was directed by Karl Hartl. By 1934 the Nazis were firmly in power, but in GOLD there isn't any major heavy-handed political themes trotted out, other than the idea of a British big-businessman who is willing to destroy the world's economic balance in his quest to make gold. The character of Holt isn't so much anti-capitalist as he is anti-greed--his efforts are more altruistic than political.

The print used for Kino's Blu-ray of GOLD is serviceable, but it is nowhere near the pristine quality of the company's releases of German silent films. (I've seen a version of GOLD on YouTube and it has the same quality that Kino's release has.) The movie is in German with optional English subtitles. There are no extras, and that's a shame--this movie could really use a commentary from an expert on classic German cinema.

GOLD is best suited for those who would be interested in seeing more of Brigitte Helm than just her appearance in METROPOLIS. (It would be fantastic if Kino came out with more Brigitte Helm films.) This movie has interest for film geeks, but it is not on the same level as the Fritz Lang masterpieces made in Germany.
Posted by Dan Day, Jr. at 3:33 PM