SHE WORE A YELLOW RIBBON On Blu-ray 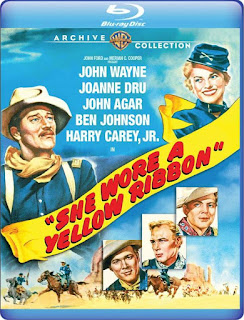 The Warner Archive Collection has just released John Ford's SHE WORE A YELLOW RIBBON on Blu-ray. This is a film that I'm sure most movie buffs already own on DVD, or at least a film they have seen several times. For this Blu-ray Warners had a new interpositive made from three different negatives of the film-I'm not a technical geek so I can't really tell you what that exactly means, but I can tell you how it looks.

Simply put, it looks astounding. SHE WORE A YELLOW RIBBON was filmed in Technicolor on location in John Ford's beloved Monument Valley, and it always looked beautiful--cinematographer Winton Hoch won an Oscar for his work--but this Blu-ray makes it even more stunning. It's as if the movie was made yesterday instead of the late 1940s. The image is so deep in color, and so clear, that at times one feels that the movie is in 3-D (especially with the majestic rock formations of Monument Valley forming a background to the action). The vibrancy of the color might just even put off those viewers who are used to the typical desaturated movies of the 21st Century.

SHE WORE A YELLOW RIBBON is one of my top 50 favorite movies of all time. The second film in director John Ford's so-called "Cavalry Trilogy", SHE WORE A YELLOW RIBBON isn't so much a straight story as it is a series of related incidents revolving around the last week of U.S. Army service for retiring Cavalry Captain Nathan Brittles (John Wayne). Brittles tries his hardest to keep the peace on the frontier outpost he is based on before he leaves, all the while guiding the young officers who will be taking his place.

I know there are still a lot of folks who don't think John Wayne was a fine actor. He wasn't an Olivier type, but he didn't have to be because he was John Wayne--and nobody could play John Wayne like....John Wayne. Actually the role of Nathan Brittles is somewhat of a departure for the Duke. Capt. Brittles is about 20 years older than Wayne's age when the actor made this film. Wayne is given a subtle old-age makeup (and a mustache), and he plays Brittles with a understated delicacy that more than proves he was a far better performer than most people are willing to admit. Wayne was nominated for an Oscar in 1949 for SANDS OF IWO JIMA, but he should have been nominated for SHE WORE A YELLOW RIBBON.

As for the movie itself...is it overly sentimental? Yes. Is it about as historically accurate as a dime novel? Probably....but it is John Ford at the top of his game, and a true piece of American folk art. If you have read a few of my posts over the years you know how much I revere John Ford. I could watch SHE WORE A YELLOW RIBBON over and over again, and seeing this restored print on Blu-ray is almost like a revelation.

I'm well aware there are a few movie buffs who try to avoid double dipping when it comes to home video purchases...but I heartily endorse getting this Blu-ray, even if you already own SHE WORE A YELLOW RIBBON on DVD. It really does look that great. And if I may say so, this would be a perfect gift for a younger (or older) person who is starting to get into classic film.