The Royalty On Film Blogathon: Flora Robson As Queen Elizabeth I 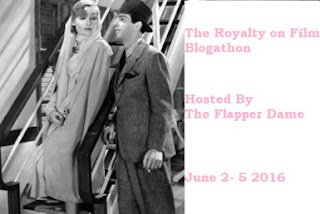 This is my contribution to The Royalty On Film Blogathon, hosted by theflapperdamefilm.wordpress.com.

I have to admit that I am not one of those many, many people who have an affection and an intense interest in the British Royal Family. It constantly amazes me how anything connected to the British Royals automatically becomes the trending topic of the day once it is unleashed on the internet. If you want to draw people to your Facebook page, Twitter account, or website, just post something--anything--about the Royals (especially Princess Diana), and you're sure to get a response.

I've never really understood why the British Royals exert such a continuing fascination, and that's with me even knowing someone who is a huge Royalty fan. (I'm sure, though, that there are plenty of folks who shake their heads at my love of the Chicago White Sox and classic horror and science-fiction films).

The obsession over the British Royals is certainly not a modern development--Shakespeare knew exactly what he was doing when he wrote about the various Kings & Queens of England. And it is to the time of Shakespeare that we must go back to in the interest of this post. 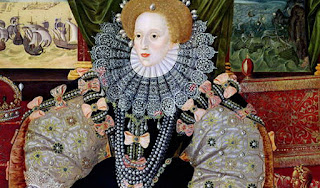 
Queen Elizabeth I, who ruled over England and Ireland from 1558 to 1603, remains one of the most famous figures in world history. Even those who have no interest in European Monarchy know the basics of her life. There's no doubt that Elizabeth had to have been a magnetic and forceful personality to not just rule so long, but to even survive--consider what happened to her mother Anne Boleyn, and her cousin Lady Jane Grey and her half-sister Mary Tudor. The woman so dominated her time that an entire era was named after her--the Elizabethan Age.

A woman who held so much power and majesty cannot help but draw the attention of those who wish to dramatize her. If there is such a thing as a prime role for an actress, it is Elizabeth I. Since the invention of movies, many great female stars have portrayed the legendary Queen Bess--Sarah Bernhardt, Bette Davis, Glenda Jackson, Judi Dench, Cate Blanchett--but for me the best Elizabeth of them all was the English character actress Flora Robson.

Flora Robson had studied at the Royal Academy of Dramatic Art and already had a distinguished stage career when she first played Elizabeth in Alexander Korda's British super-production of FIRE OVER ENGLAND in 1937. Robson was only in her thirties when she appeared in this film. FIRE OVER ENGLAND is set in the 1580s, when Elizabeth was in her fifties. 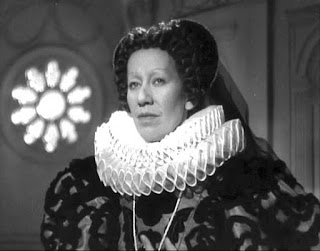 Flora Robson in FIRE OVER ENGLAND

Robson gets first billing in FIRE OVER ENGLAND, and I'm sure she probably thought the movie would do for her what Korda's THE PRIVATE LIFE OF HENRY VIII did for the career of Charles Laughton. Robson's Elizabeth is somewhat overshadowed, however, by the love story between the characters of Laurence Olivier and Vivien Leigh. The couple had a torrid off-screen romance as well, and they may have affected their performances--both Olivier and Leigh are not only uncommonly good-looking, they are uncommonly hammy as well. Robson apparently wasn't too happy about the amount of attention on-set that was given to the young couple.

Putting aside the roles of Olivier & Leigh, FIRE OVER ENGLAND remains a magnificently mounted production, with sublime black & white photography from James Wong Howe. The sets and costumes are breathtaking (did 16th Century England really look this good?), and the story brings the viewer right into England's battle with the Spanish Armada. But the main highlight of FIRE OVER ENGLAND is Flora Robson's Elizabeth. She's everything one would imagine a great Queen to be--commanding, authoritative, cunning, yet still much concerned with the welfare of her people. In FIRE OVER ENGLAND Elizabeth has to do a balancing act between currying favor with Spain and still secretly preparing for war with that country. Robson is excellent in showing the Queen's machinations, and she does it without the self-pity that shows up in many other actress's portrayals of Elizabeth. There is one small scene where Elizabeth reflects on her looks ("This mirror needs replaced"), but Robson's Queen has no time for such thoughts--she has a country to run and a people to protect.

Robson's Queen treats Olivier & Leigh as children (possibly Robson's real-life feelings about the couple had something to do with this), and she treats the rest of her court in the manner that they deserve. One of the best scenes in FIRE OVER ENGLAND has Elizabeth personally spoon-feeding one of her most trusted, and elderly, minsters. Another standout scene happens right before the Armada battle, when the Queen confronts a group of ministers who have been conspiring against her. Instead of having them executed outright, Elizabeth dresses them down verbally instead--and the traitors are so awed by this moment they all swear new allegiance to her (I still wouldn't have trusted these guys as far as I could have throw them). Only an actress as talented as Flora Robson could have pulled this scene off.

The movie ends with the Spanish Armada defeated, and Elizabeth leading her people in thanks to God for the salvation of England. If you are not an Anglophile before you watch FIRE OVER ENGLAND, Flora Robson's speech at the climax will make you one.


Flora Robson was so impressive as Queen Elizabeth in FIRE OVER ENGLAND that she got to play the role again a few years later--this time in a Hollywood film, a movie even bigger and bolder than anything Alexander Korda could have dreamed up. THE SEA HAWK (1940), produced by Warner Bros. and directed by Michael Curtiz, is in my opinion one of the greatest "swashbuckling" films of all time. (I even wrote about THE SEA HAWK for a Swashbucklers blogathon in November of 2015.) Starring the one-and-only Errol Flynn, THE SEA HAWK is almost a remake of FIRE OVER ENGLAND (yes, even as far back as the 1930s and 40s Hollywood was remaking or re-booting foreign product). The main difference between THE SEA HAWK and FIRE OVER ENGLAND is that the former picture is a Errol Flynn vehicle all the way--Robson's Elizabeth has more of a supporting role, but she plays an important part in the proceedings nonetheless. 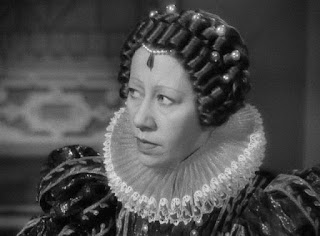 Flora Robson as Elizabeth in THE SEA HAWK

Warner Bros. had already made a film featuring Queen Elizabeth and a character played by Flynn--THE PRIVATE LIVES OF ELIZABETH AND ESSEX. Bette Davis played the Queen in that one, and the focus of the story was on the relationship between Elizabeth and the Earl of Essex. Davis' portrayal of the Queen is now famous, but I much prefer Robson over her--Davis' Elizabeth is sullen and petulant. It didn't help the film (which is slow and tedious) that Davis and Flynn had no chemistry together. Warner Bros. decided that THE SEA HAWK would be filled with the adventure of the Elizabethan Age instead of any heavy drama about the Queen's personal life.

Robson in THE SEA HAWK is as commanding as ever, but this time she gets to show some wry humor in her scenes with Errol Flynn. Flynn plays one of the many sea captains who are performing what amounts to legal piracy in the service of England over Spain. Officially Elizabeth is supposed to be against these men, but behind the scenes she supports them. Elizabeth treats Flynn the way a "good girl" reacts to a "bad boy"--with a mixture of exasperation and flirty charm. It's obvious when one watches THE SEA HAWK that Robson enjoyed acting alongside Flynn, and that makes her Elizabeth that much more human--and enjoyable--to the viewer. (There's a story that during the filming of a famous climatic scene where Elizabeth bursts in on a sword fight between Flynn and the Queen's enemies, Robson yelled out "All right! Break it up, boys!"--a joke suggested by the roguish Errol.)

THE SEA HAWK does not show the Spanish Armada battle, but it leads right up to it--giving Robson another chance to make a powerfully moving patriotic speech. This time her speech had even more emotional weight, what with England at war with Germany in real life. Winston Churchill himself couldn't have done any better, and supposedly he was hugely impressed with THE SEA HAWK.

Flora Robson had the very unique chance to play one of the most famous monarchs in world history in two very different yet in some ways very similar feature films. The result is that she set a standard for cinema Royalty that continues to this day. THE SEA HAWK is one of my favorite 100 movies of all time, and having first seen it when I was young, I can't help but always think of Flora Robson whenever Queen Elizabeth I is mentioned. I certainly can't vouch for the historical accuracy of FIRE OVER ENGLAND or THE SEA HAWK, or even Flora Robson's portrayal of the great Queen. But if I somehow had the chance to take a trip in Doctor Who's TARDIS, and I happened to meet the real Queen Elizabeth I....I'd be very disappointed if she wasn't like Flora Robson.
Posted by Dan Day, Jr. at 10:23 AM