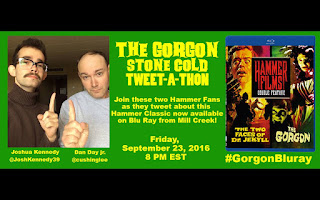 One of the things I do on most Saturday nights is partake in the Svengoolie tweet-a-thon. What that means is while watching Svengoolie on MeTV, I (and many others) on the internet go on Twitter and make various comments about the movie that Sven is showing. It's a lot of fun, and it also helps explain why I don't have much of a social life. I have also on occasion participated in live tweeting during Turner Classic Movies programming, using the hashtag #TCMParty.

Now I'm proud to announce that I and my good friend independent filmmaker Joshua Kennedy have created our own special tweet-a-thon. It will involve the new Mill Creek Blu-ray of the 1964 Hammer film THE GORGON, starring Peter Cushing and Christopher Lee. The festivities begin on Friday night, September 23, at approximately 8 PM EST (North American time). If you own a copy of the Blu-ray and would like to join in, get your disc playing at 8 PM, and add the hashtag #GorgonBluray to any comments you would like to make.

But what if you don't own a copy of the Blu-ray yet? Well...you can always demand that your friends and family buy you one. Actually, if you have a DVD or a VHS copy of THE GORGON, that will work too....heck, we'll even accept a ViewMaster version of the film.

THE GORGON happens to be Josh's favorite film of all time (he even wrote a guest post on this blog about the movie in May, 2015). Josh will certainly have plenty of factoids about the film, and I in my inimitable fashion will be chiming in as well. Depending on the feedback we get from this (that is, if we get any feedback at all), Josh and I may be do more Hammer film tweet-a-thons in the future.

Just remember that it all happens Sept. 23 at 8 PM EST. Our Twitter handles are on the banner posted above. If you have any questions about the event, please leave a comment here or at the Hitless Wonder Facebook page.