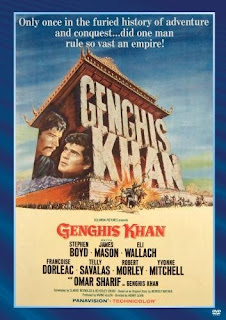 I'm fond of buying obscure movies at a cheap price because....that's what I do. One of my latest DVD acquisitions is the 1965 historical epic GENGHIS KHAN, which I purchased from Edward R. Hamilton Booksellers for $6.

Earlier this year I wrote a post on the infamous John Wayne as Genghis Khan movie THE CONQUEROR. Do I really need another underwhelming Genghis Khan film in my collection? Hey, why not? GENGHIS KHAN is better than THE CONQUEROR, but not by all that much.

GENGHIS KHAN was made at the height of the big-budget historical spectacular. It shares many of the same features these films all seem to have--a number of noticeable name stars in the cast, scenes of cavalry sweeping across the wide screen, far-flung locations, and large-scale sets. At a little over two hours, GENGHIS KHAN doesn't have the mammoth running time that most epics have, and in this case, that's a good thing, because the movie has a ponderous pace to it.

Omar Sharif is Genghis Khan (he's called by his real name, Temujin, throughout the story). At the start of the film we see the boy Temujin forced to watch as his father is executed by Jamuga, the leader of a rival Mongol tribe. Jamuga is played by Stephen Boyd, who, due to his role in the '59 BEN HUR, wound up appearing more than a few epics at this time. (In THE CONQUEROR, Jamuga is Temujin's brother--here, he's his arch-enemy.) The young Temujin is held as a slave by Jamuga, but the future Khan escapes once he reaches manhood. Temujin decides to begin to implement his dream of uniting all the Mongol tribes and ruling a great empire. Among Temujin's closest allies are characters played by Michael Hordern, Telly Savalas, and Woody Strode.

Before he can do that, Temujin must first capture his true love, Bortai. The role of Bortai in THE CONQUEROR was played by Susan Heyward, and in this film it is played by French actress Francoise Dorleac. If you think Susan Heyward was far too white to play a Mongol Princess, wait till you see Dorleac in the role--despite supposedly living her life in the Central Asian steppes, she's paler than the 1976 version of David Bowie. Temujin wins Bortai's affections (he is played by Omar Sharif, after all), and she becomes the Mongol Lord's loyal wife. She also brings along her three brothers to serve as Temujin's lieutenants, and if anything they're whiter than she is.

Temujin decides to take his ever-growing tribe east to the empire of China. A major part of the film is devoted to this sequence, so much so that the viewer begins to wonder if this is actually a movie about Marco Polo instead of Genghis Khan. This sequence introduces us to Robert Morley as the Emperor of China, and James Mason as one of the Emperor's advisers. (If you're wondering which actors are in this film that really are Asian, well...there aren't any, at least in the major roles.)

Robert Morley plays the Emperor as basically Robert Morley, which is fine. As for James Mason...you have to see his performance to appreciate it (and to believe it). Mason spends his entire time on screen squinting his eyes and showing his teeth in a goofy grin, all the while speaking in an accent which makes him sound like a British Elmer Fudd. It's the type of "Chinese" portrayal that one expects to see in a Three Stooges short rather than a historical epic. I don't know if Mason was trying to be the comic relief, or if he just didn't give a hoot to begin with, but his "acting" here throws the entire movie off balance. What makes Mason stick out even more is that no one else in the multi-national cast tries to affect an accent. Mason had just played another Emperor's adviser in another epic, THE FALL OF THE ROMAN EMPIRE, and in that movie he was his typical dignified and articulate self. When one considers that, it makes his appearance here even more disappointing.

Tired of being cooped up in China, Temujin and his band make their escape with the help of a giant fireworks display (and I have to say that the display is more impressive than the Comiskey Park scoreboard going off). Temujin then sends off Bortai's brothers to conquer parts of Asia. Unfortunately we see Temujin talk about this, instead of actually seeing it happen. The movie climaxes with the now-Genghis Khan finally having a showdown with his nemesis Jamuga, who has allied himself with a sneaky Shah (played by Eli Wallach).

GENGHIS KHAN, as a film, is...okay. It lacks a certain "oomph" to make it a bold adventure, and it isn't bad enough to be as notable as THE CONQUEROR. The movie is ably directed by Henry Levin, and it has some very nice cinematography by the great Geoffrey Unsworth. (Sadly, a lot of Unsworth's work is wasted by the many "day-for-night" scenes which look murky.) The movie was filmed in Yugoslavia, which does give it a bit of a different look than most epics of the time. What hurts GENGHIS KHAN the most is that the average viewer doesn't have much of a reason to care about what happens to any of the characters. A lot of that has to do with Omar Sharif. His performance isn't lacking...but he seems too refined to be Genghis Khan. Say what you want about John Wayne as Genghis, at least he was a guy that you believed would be tough enough to try and take over the known world. Sharif's Khan is constantly going on about his dream of uniting the Mongol tribes, but the movie doesn't mention that the real-life Genghis had to slaughter untold numbers of people in order to fulfill his wishes....probably because the audience is supposed to be sympathetic toward Sharif. I honestly think Stephen Boyd would have been a better Genghis than Omar Sharif--Boyd may look a bit silly as a Mongol chieftain but he at least brings some passion to the role.

The DVD I have of GENGHIS KHAN is from Mill Creek, who has been releasing a lot of Columbia Pictures products at budget prices. "Budget prices" means you get what you pay for--the movie is presented in 2:35.1 anamorphic widescreen, but there is definitely some compression issues. As with most of the movies I buy, GENGHIS KHAN will have more interest to history and movie buffs than mainstream viewers. It really is one of the films "they don't make any more"....for the simple reason of the casting. If James Mason tried his "Chinese" act today in a major film, there would be riots at your local googleplex.