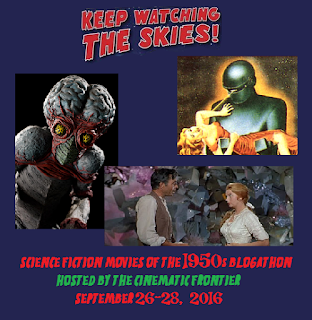 When one thinks of 1950s science-fiction films, it is natural to focus on the many American productions that defined the genre during that particular decade. But there were several British movies that were also important to the period.

Hammer Films is best remembered for their colorful Gothic horrors, but they were making standout black & white science-fiction features before they started on their Frankenstein and Dracula series. THE QUATERMASS XPERIMENT (U.S. title: THE CREEPING UNKNOWN) was Hammer's first real horror tale, based on a TV play by Nigel Kneale. Hammer would go on to make a very Quatermass-like film with X THE UNKNOWN, and a true Quatermass sequel in QUATERMASS 2 (U.S. title ENEMY FROM SPACE).

Both Quatermass films were directed by Val Guest, who brought a documentary-like precision to Nigel Kneale's fantastic tales. In 1955 Kneale wrote another TV play for the BBC called THE CREATURE, about the search for the legendary Abominable Snowman. Hammer bought the rights to make a feature film version. Peter Cushing had starred in the TV play, and would soon make his Hammer debut in the groundbreaking THE CURSE OF FRANKENSTEIN. Hammer would film the play in early 1957 and change the title to THE ABOMINABLE SNOWMAN (in America the official title was THE ABOMINABLE SNOWMAN OF THE HIMALAYAS. Here I will refer to it as THE ABOMINABLE SNOWMAN, because that's what everyone calls it, and it saves me a lot of typing.) Cushing would reprise his TV role in the film.

THE ABOMINABLE SNOWMAN isn't as famous as the Quatermass films, or a few other British science-fiction movies of the 1950s, but it deserves to be. Peter Cushing plays John Rollason, a scientist doing research at a Tibetan monastery. Despite his wife Helen's (Maureen Connell) reservations, Rollason decides to join a climbing expedition led by the roguish Tom Friend (Forrest Tucker). Friend's plans are not scientific--he's intent on capturing a Yeti, and Rollason is intrigued about having the chance to find such a creature. Rollason, Friend, and a small party venture out into the snows, and an actual Yeti is found--but the group is soon whittled down by their own fears. Rollason begins to realize that the warnings given him by the monastery's Lama (Arnold Marle) should have been heeded.

When I first saw THE ABOMINABLE SNOWMAN, I was a bit disappointed, for the simple reason is that the Yeti is barely shown. After other viewings, however, I started to appreciate the film for what it is--a thinking person's science-fiction film instead of a typical monster show. Cinematographer Arthur Grant's stark black & white photography of the barren snowy landscape gives the movie an almost noirish feel. (Director Val Guest and doubles for the actors traveled to the French Pyrenees for location shooting, and production designer Bernard Robinson built matching snowscapes at Pinewood Studios.) Humphrey Searle's Oriental flavored music adds a haunting element to the scenes, and Val Guest uses the widescreen "Hammerscope" to give a sense of loneliness and desolation.

Nigel Kneale wrote the screenplay, and he infuses the story with some of his favorite themes, such as the insignificance and childishness of the human race. Friend and his team believe that they have things under control, and that they have planned for every situation, but it soon comes to pass that they are very wrong. The group of Yeti that are besieging the group (we are made aware of their presence, but we never really see them) are more of a mental threat than a physical one. It is established in the story than a Yeti is around 10 feet tall, and may be hundreds of years old. Nigel Kneale thankfully doesn't explain everything that is going on, letting the viewer decide whether the Yeti are "controlling" the members of the expedition. One can't help but be reminded of H. P. Lovecraft's novel AT THE MOUNTAINS OF MADNESS when watching THE ABOMINABLE SNOWMAN--the Yeti, as presented in the film, are very reminiscent of Lovecraft's "Old Ones".

What really gives THE ABOMINABLE SNOWMAN added heft is the performance of Peter Cushing. One of the many reasons Cushing was so successful in the genres of horror and science-fiction was his innate ability to make any outlandish plot line seem realistic and understandable. Right from the beginning the audience knows that John Rollason is an intelligent and earnest individual. Rollason may lack the melodramatic flair that Cushing's two most famous doctors--Frankenstein and Van Helsing--had, but he shares with those characters traits such as dogged determination and personal courage. Rollason truly hopes that he may be performing a service to mankind if he finds the Yeti, but Cushing also shows that the man has great doubts about the entire affair, especially when he gets to know Tom Friend and the other members of the expedition better. 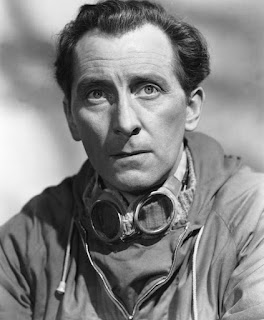 In the TV play THE ABOMINABLE SNOWMAN is based on (which I have never seen), the role of Tom Friend was played by Stanley Baker. Here Forrest Tucker plays Friend, and the contrast between Tucker and Cushing helps the story immensely. While Cushing is thin, studious, and mild-mannered, Tucker is big, loud, and emphatic. But one shouldn't assume that Tucker's Friend is the obvious "bad guy". Tucker actually brings some surprising subtlety to the role--you may not like Friend, but you certainly don't want to underestimate him. After Hammer started making their Gothic horrors, the company for the most part stopped importing American actors like Tucker into their films. Tucker himself would go on to make a couple more British sci-fi features--THE CRAWLING EYE and COSMIC MONSTERS. Despite the fact that Tucker is now best known for the goofy TV show F TROOP, he's very effective here, and he and Cushing play off each other very well.

Usually in a 1950s science-fiction film the leading lady role is played by a gorgeous scream-queen type. Maureen Connell as Helen Rollason certainly isn't that. The reason that she is with her husband to begin with is that she is helping him in his work. Instead of wearing a nightgown and being carried off by a monster, Mrs. Rollason actually goes off on her own expedition into the mountains to try and find her husband, a very unusual and welcome thing for a woman character in this type of movie made in this period.

One other performer I have to mention is Arnold Marle, who plays the Lama. A wizened, little old man, the Lama is constantly making mystical pronouncements and looking off into the distance, as if sensing something. Watching the Lama I couldn't help but be reminded of Yoda! Marle makes a large contribution to the otherworldly aspects of the picture.

THE ABOMINABLE SNOWMAN, like just about every Hammer film, did not have a huge budget. In this case I think that was a help rather than a hindrance. Because of the black & white photography, the location scenes match very well with the studio snowscapes. The monastery set looks fine, and you really don't need millions of dollars to make fake snow. Some may quibble that there's very little that's abominable and there's not much snowmen, but in the end this is a well-made, adult science-fiction adventure that gives the audience something to think about. All of Hammer's science-fiction tales deserve reappraisal, and THE ABOMINABLE SNOWMAN is one of the most underrated entries in that wonderful sci-fi movie decade of the 1950s.