THE MANSTER On Blu-ray 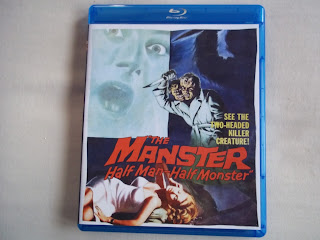 Shout Factory, under their Scream Factory label, releases yet another weird vintage horror film on Blu-ray--the 1962 production THE MANSTER. This movie was filmed in Japan, with a mostly Japanese crew--but the directors, producers and writers were American. No matter who was behind it, the result is indeed a strange concoction.

An American newspaper reporter working in Japan named Larry Stanford (Peter Dyneley) travels to a remote laboratory based on a mountain to interview a scientist (Satoshi Nakamura) about his experiments dealing with human evolution. The duplicitous doc slips Larry a mickey, and while the reporter is passed out he is injected with a mysterious serum. Larry soon becomes an irritable drunk, and even though he is married, starts to enjoy the Tokyo night life with the scientist's gorgeous assistant (Terri Zimmern). There's a bigger reason for Larry's irritability than a mid-life crisis--the serum has caused a being to start growing inside of him! The being also drives Larry into sporadic killing urges. Larry's condition worsens, to the point where he has a new head growing out of his shoulder (in this case two heads are not better than one). It all leads to a frantic climax at the scientist's laboratory, backed by an exploding volcano of all things.

A written description of THE MANSTER simply can't do it justice. It has a number of elements which make it stand out from the typical monster flick of the 1950s-60s. First, there's the fact that even though the lead character is American, the film is set in Japan, which brings even more of an outsider quality to his plight. The movie has a very seedy quality to it--the opening scenes show three lovely Japanese bathing beauties attacked by a shadowy creature, and Larry's partying ways play a major role in the plot. The scientist eggs Larry on to pursue his beautiful assistant--their nudge nudge wink wink conversation on how "friendly" the lady can be is a hoot. The scientist really wants the woman to keep an eye on Larry--and she even winds up falling for him, despite the fact that he acts like a total jerk most of the time.

One could say that there's a reason why the character of Larry Stanford acts like a jerk, since he's been injected with an experimental serum that causes a uncontrollable being to grow inside him. But even before his affliction, Larry carries a self-satisfied smirk on his face, and he comes off as an arrogant American. It's hard to feel sorry for Larry because of this, and especially since the married man develops a taste for the Japanese club scene. My Facebook friend Dan Smeddy says that actor Peter Dyneley, as Larry, looks like Lon Chaney Jr., and sounds like Alan Ladd. That's an apt description, and Larry's travails do resemble those of Lon Jr's Larry Talbot (except that Lon Jr. was much more sympathetic). If Peter Dyneley's voice does sound familiar to you, it may be due to the fact that he provided the speech for the puppet of Jeff Tracy in the British cult TV series THUNDERBIRDS. By the way, the character of Larry's wife is played by Jane Hylton (who also appeared in CIRCUS OF HORRORS), and she and Peter Dyneley were married in real life.

Satoshi Nakamura is a bit too low key as the scientist--this part calls for the manic intensity of a Lugosi or a Atwill. The viewer finds out that the doc has experimented on his brother and wife as well! (The wife, who has become a pitiful monstrosity, is kept in a cell--every movie mad scientist's laboratory has to have a cell to keep failed experiments or gorillas). Terri Zimmern brings an exotic quality to her role of the scientist's assistant. I tried to find out more information on her through the internet, but apparently THE MANSTER was her only confirmed movie role--I find that surprising considering her striking good looks. She doesn't even have a Wikipedia page!

The most memorable aspect of THE MANSTER is the idea of Larry having an extra body growing out of him. Larry's condition was a major inspiration for a famous sequence in Sam Raimi's ARMY OF DARKNESS, and elements of it would later be found in such films as THE THING WITH TWO HEADS and THE INCREDIBLE TWO-HEADED TRANSPLANT. I'm sure many might find the whole idea laughable, but it is the main reason THE MANSTER has any notoriety at all 55 years after its production. The movie does have some slow spots, especially in the soap opera-like aspects of Larry's problems with his wife, but for most of its 72 minute running time it gives classic monster movie fans what they want, and it even injects some black & white noir elements into the proceedings.

Shout Factory presents THE MANSTER in HD 1.66:1 black & white anamorphic widescreen. The print looks fine, and the DTS-HD mono audio is very robust. The only extras are a trailer and a still gallery, which shows advertising for the film featuring an alternate title, THE SPLIT. It's too bad that Shout Factory wasn't able to provide an audio commentary for this--I would love to know more about the making of this production and the people who were behind it.