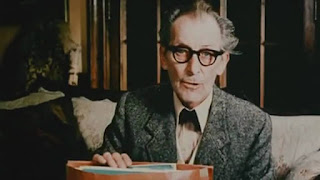 The latest entry in my YouTube Theater viewings is THE UNCANNY, a anthology horror film filmed in Canada and England in late 1976. The movie tries to be on the level of more famous multi-part terrors as DR. TERROR'S HOUSE OF HORRORS and THE HOUSE THAT DRIPPED BLOOD, but it falls way short.

THE UNCANNY was co-produced by Milton Subotsky, and he provided the stories for Michael Parry's screenplay. Subotsky was the co-founder of Amicus Productions, the company that made the films I mentioned in the first paragraph of this post. Subotsky had parted ways with his Amicus partner Max Rosenberg, and set up THE UNCANNY as an independent production. Like his earlier Amicus horror tales, Subotsky gathered up a number of notable actors for his new venture, such as Peter Cushing, Ray Milland, Joan Greenwood, Donald Pleasence, Samantha Eggar, and John Vernon.

By 1976, however, the English Gothic film had all been rendered extinct (the movie that Peter Cushing had worked on earlier in that year, STAR WARS, just about finished the genre off when it was released). THE UNCANNY seems stale and old-fashioned, even when compared to the Amicus films Subotsky worked on only a few years before.

The linking story of THE UNCANNY deals with Wilbur Gray (Peter Cushing), a strange character who is trying to get his new book published by Frank Richards (Ray Milland). Gray's work purports to show that the common cat is actually a danger to humans all over the world. Gray proceeds to tell Richards three stories that will supposedly back his claims.

The first story takes place in England, 1912. A rich old woman (Joan Greenwood) plans to change her will and leave her fortune to her many. many cats, instead of her nephew. The old lady's maid (Susan Penhaligon) is in love with the nephew and tries to steal the new will while her mistress is asleep. The woman wakes up and the maid suffocates her...only to have the dead woman's voluminous collection of cats take revenge by besieging the maid in the old woman's home and attacking her.

This is probably the best of THE UNCANNY's three tales (which isn't saying much). It occurred to me that this story is basically a retread of Hammer's SHADOW OF THE CAT (that's more fuel to throw on the fire of the rivalry between Subotsky/Amicus and Hammer).

Gray's second example takes place in 1975 Quebec. A young girl named Lucy, who has lost her parents in a plane crash, is taken in by her Aunt and Uncle. Accompanying Lucy is her cat, named Wellington. Lucy's Aunt doesn't like cats, and Lucy's spoiled cousin Angela is jealous of it. Angela blames the cat for her own trouble making, and her mother decides to get rid of it...but Wellington returns, and encourages Lucy to take revenge through use of the occult, which she does by shrinking Angela to the size of a mouse. The scenes of the spellbound Angela vs. Wellington are very reminiscent of THE INCREDIBLE SHRINKING MAN. What's most interesting about this tale is that Chloe Franks plays Angela. In THE HOUSE THAT DRIPPED BLOOD, Franks played a role very much Lucy--here she's the victim of black magic instead of the perpetrator.

The final tale is set in 1936 Hollywood. An egotistical actor (Donald Pleasence) "accidentally" kills his wife during the filming of his latest horror movie. The actor's mistress (Samantha Eggar) immediately fills in, at the studio and at home...but the devious couple have failed to reckon with the late wife's cat, who brings about a grisly comeuppance for both.

This story attempts to be satirical, in the manner of the climax of THE HOUSE THAT DRIPPED BLOOD, which also happened to feature an egotistical horror movie actor (who was played by Jon Pertwee). I say "attempts"...because it just isn't funny. The story resembles a skit from the Carol Burnett TV show--except it isn't as entertaining. You'd think the one thing a horror satire would get right is making fun of actual horror movies, but the 1936 setting doesn't jibe with the Edgar Allan Poe-Roger Corman style movie being made.

In the end, THE UNCANNY isn't very uncanny. The whole point of the movie is that cats are plotting against us...but in the stories being shown, the only people harmed by the felines are nasty folks who deserve to "get it". The cats appear to be dishing out a form of cosmic justice instead of targeting the innocent. There may be some out there who are afraid of cats, but I'm sure there's many more cat lovers. The average house cat just doesn't seem all that scary. Director Denis Heroux spends a lot of time showing various cats in close-up, and there's a lot of shots of the critters leaping about, but despite all of that there isn't a real sense of menace.

Peter Cushing doesn't have much screen time in THE UNCANNY, but he does enough to convince the audience of Wilbur Gray's bizarre beliefs. Cushing's Gray is a trembling, worried man, and a bit disheveled (as I've mentioned on this blog before, when Cushing's hair is in disarray, you know things are not going too well). If there is a reason to see THE UNCANNY, it is for Cushing, despite his small role.

As I've mentioned, every story in THE UNCANNY reminds me of a much better film. It's as if Milton Subotsky had scraped the bottom of the barrel for ideas and made a few adjustments on earlier stories. The horror anthology film has a lot of promising possibilities, but too many of them follow the same old pattern of using the EC Comics/Robert Bloch format of disreputable characters getting supernatural just desserts.
Posted by Dan Day, Jr. at 2:09 PM