BEGGARS OF LIFE On Kino Blu-ray 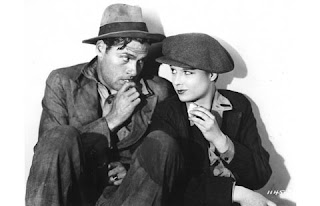 I was greatly anticipating this disc since I had never actually seen BEGGARS OF LIFE. The movie is now famous mostly for featuring Louise Brooks, but it is an engaging tale set on the back roads of America. Richard Arlen (who had just starred for Wellman in the director's monumental triumph WINGS) and Brooks play a couple of young wandering souls trying to find some sort of stability in their restless lives.

BEGGARS OF LIFE is a combination of gritty realism and old-fashioned sentiment. The story begins with Louise Brooks' character explaining to Arlen's why she had to shoot her foster guardian in the head! The guardian was trying to sexually assault Brooks, which is shown in flashback, including the man's death (a very grim sequence for the period). Arlen stumbles upon Brooks while looking for a meal, and the two decide to get away by hopping a train out of the area. Brooks puts on men's clothing in an attempt to disguise herself as a young boy. Whenever a female character wears men's clothes in a classic Hollywood film, she winds up looking even more feminine, and that goes for Brooks in this movie. The duo meet up with a group of hobos led by the boisterous Oklahoma Red (Wallace Beery), who tries to claim Brooks as his "property". The situation is made even more complicated by the fact that Brooks is now wanted for the murder of her guardian, and the authorities are hot on their tails.

What makes BEGGARS OF LIFE unique as a "Life on the Road" film is that it is not set during the Great Depression. Wellman does not try to inject any type of social commentary into the story, and there is no message concerning the vagabond's plight. The characters played by Arlen and Brooks (they are listed in the credits as "The Boy" and "The Girl") have obviously led hard lives, but they take a matter-of-fact attitude toward their situation. Brooks gives a very modern, low-key type of performance. Her natural beauty and charisma are still more than apparent, even under her unusual wardrobe. With all respect to Clara Bow, Louise Brooks was a true "IT" girl--she was blessed with a magnetism that made you watch her every move whenever she is on the screen. BEGGARS OF LIFE gave her a chance to play a very different type of role. She spends most of the movie in a state of wary apprehension--which is understandable, since it is very obvious what the hobos would do to her if they got the chance.

Richard Arlen is okay, but he gets all but pushed off the screen when Wallace Beery shows up. His Oklahoma Red is the type of character Beery would play over and over again at MGM in the 1930s and 40s--the menacing blowhard who turns out to be a softie in the end. Beery makes the most of the role, and even though this is a silent movie, you can't help but hear the actor's voice in your head whenever Oklahoma Red's dialogue is presented on an intertitle.

BEGGARS OF LIFE is a great film for train buffs, and it's amazing now to see the lead actors gallivanting about fast-moving rolling stock. William Wellman definitely achieves a sense of time and place, and despite the sentimentality the movie doesn't feel phony. I'm really glad that Kino decided to release this title on Blu-ray, because now more silent film fans will have a better chance to see it.

The print used on this Blu-ray was digitally restored from 35mm film elements preserved by the George Eastman Museum. It has some wear but it looks very fine--and most important, it doesn't have the over processed look of some silents on Blu-ray. The score was performed by the Mount Alto Motion Picture Orchestra, and it is presented in 2.0 DTS stereo.

Two audio commentaries are provided--one by William Wellman Jr. (which I have not listened to yet) and the other by Thomas Gladysz from the Louise Brooks Society. Gladysz's talk is an excellent one, going into all the relevant details of the production and the various adventures Louise Brooks had during the making of the film.

A 12-page booklet is also included, which has stills from the film and analysis from Nick Pinkerton. The Blu-ray has a reversible cover sleeve, with Louise Brooks featured on one side and Wallace Beery on the other (I'd rather look at Louise).
Posted by Dan Day, Jr. at 2:05 PM