One of the things about being a film buff is that you have a tendency to pay more attention to the cast & crew of certain movies than you do to the movie itself. A perfect example of this is the 1969 British feature CROSSPLOT, starring Roger Moore.

I saw this film for the first time on television a few days ago, and what struck me was the number of actors in the cast that had cult associations, particularly with Hammer Films. CROSSPLOT has the lovely Veronica Carlson, Francis Matthews, and Bernard Lee, all of whom have co-starred with Peter Cushing and Christopher Lee at one time or another in their respective careers. Toni Gilpin, who was the very first victim of Hammer's THE GORGON, has a very small role, and David Prowse--the future Darth Vader--is an extra in a wedding scene! So there is an obvious incentive to view CROSSPLOT from a geek standpoint....but the movie itself is a fun, fast-paced thriller that doesn't take itself too seriously.

Roger Moore plays advertising executive Gary Fenn, and we are first introduced to him as he is making out on the couch with Veronica Carlson. Fenn's alarm goes off, and he realizes he's late for work, so he leaves Veronica rather abruptly, which makes the young lady quite mad (you can understand her frustration when you find out she doesn't have another scene in the entire picture). Fenn is preparing a big ad campaign, and he plans to use Veronica's character as the main spokesmodel. Before Fenn's presentation, Veronica's photo is switched with someone else's, and since the ad campaign is approved, Gary now has to find this mysterious beauty. He does track down the woman--a gorgeous Hungarian named Marla Kugash (Claudine Lange). Gary gets more than he bargained for when he finds out that Marla is unwittingly involved in a vast conspiracy--her Aunt Jo (Martha Hyer) belongs to one of those secretive international groups that cause chaos throughout the world. Gary's investigations lead him to be accused of murder, and while the ad man and Marla are on the run, they unravel a plot to assassinate an African leader in Hyde Park.

The story of CROSSPLOT may seem like a James Bond tryout for Roger Moore, but for me it is more like a lighthearted Hitchcock film. It's very reminiscent of NORTH BY NORTHWEST, though nowhere near that film's scale. Roger Moore has a very Cary Grant-like way about him in CROSSPLOT. He's an ad man, just like Cary Grant's Roger Thornhill was in NORTH BY NORTHWEST. Moore, like Grant, has a wry sense of humor concerning his situation, and he's rather resourceful in dealing with professional killers despite the fact he is not a secret agent. One of the most famous sequences in NORTH BY NORTHWEST has Grant elude his pursuers by acting as obnoxious as possible during a high-class auction--in CROSSPLOT Moore does the same thing at a wedding, but he goes Cary one better by driving off in the couple-to-be's car! In another scene Moore takes a shower fully dressed, just like Grant did in CHARADE, a film very much along the same lines as CROSSPLOT. The "Wronged Man on the run with an uncooperative female" plot is one of Hitchcock's most basic stories, and the climax of CROSSPLOT, which has Gary and Marla trying to stop an assassination in Hyde Park that is timed to coincide with cannon fire, can't help but remind you of the climax of THE MAN WHO KNEW TOO MUCH. 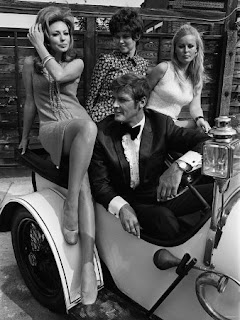 There are some elements in CROSSPLOT which do anticipate Moore's future as 007. The relationship between Moore and Claudie Lange as Marla--a mixture between flirtation and frustration--is very much how Moore's Bond would behave toward his leading ladies. Gary Fenn is very much the ladies man--whenever he walks into a room all the ladies take appreciative notice of him, even the conniving Aunt Jo. Moore plays Gary Fenn very much like he would Bond--he gets out of jams through a combination of natural charm, wits and sometimes dumb luck. One could say that Moore played all his roles that way--but that was his persona, and when it came to that, nobody did it better than Roger Moore (pun intended). Moore had a likable screen presence that made you buy into whatever situation he was in. If CROSSPLOT does remind you of an elongated episode of Moore's TV series THE SAINT, it is no coincidence--the producer of THE SAINT, Robert Baker, also produced CROSSPLOT, and the movie is very much tailored to Moore's strengths.

Director Alvin Rakoff keeps things moving at fast clip, and he doesn't dwell too much on the plot inconsistencies. The one major action sequence in the film has Gary, Marla, and a associate in an antique car being chased by a helicopter. (It appears to me that some of this sequence was filmed in Black Park--another of the film's connections to Hammer.) The sequence is good, but it is hurt by too much reliance on rear screen projection, and this effect is prevalent throughout the film. One of the movie's subplots deals with a group of peace protesters that Marla is friends with. The attempted injection of Swinging London/Flower Power elements into the plot is one of the movie's weak points--it's fairly easy to discern that none of the cast or crew had any real knowledge of the hippie generation.

Overall, though, CROSSPLOT is a enjoyable film that shouldn't be analyzed too extensively. It's more of a light dessert than a full meal, but it is diverting entertainment with a interesting and notable cast, and it gives Roger Moore one of his best screen roles other than James Bond.