ERIK THE CONQUEROR On Arrow Blu-ray 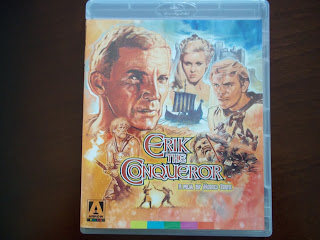 Arrow Video delves once again into the work of the Italian Maestro of cinematic fantasy with their release of Mario Bava's 1961 Viking epic ERIK THE CONQUEROR.

A number of Viking adventure films were made in Europe during the 1960s, at the height of the sword & sandal genre known as peplum. Mario Bava had a great deal to do with the development of the peplum film due to his work on the original HERCULES movies, so ERIK THE CONQUEROR was more in accord to his stylistic tastes than one would initially assume. What at first glance this seems to be nothing more than a cheap imitation of the Kirk Douglas vehicle THE VIKINGS becomes a tale worthy of note thanks to Bava's visual talent. Tim Lucas calls ERIK THE CONQUEROR the director's most underrated film, and I'd have to agree with that assessment.

The story begins with a raid on a Viking settlement on the coast of England in the 8th Century. During the raid, the Viking king is killed, and his young sons Eron and Erik are split up--Eron is taken back to his homeland, and Erik is found and adopted by the English Queen Alice. Twenty years later, Eron (Cameron Mitchell) and Erik (George Ardisson) come into conflict with each other, with the added complication of a pair of beautiful vestal virgins, played by the Kessler sisters (German-born twins who were famous in Europe for their cabaret act).

ERIK THE CONQUEROR has plenty of the action one would expect from the usual peplum film--the opening raid on the Viking village, a battle at sea, and a climatic attack on a English castle. What makes these sequences even more impressive is how little time and budget Bava had to make them. Bava was not just the director here, he was also the cinematographer and co-writer. His visual flair is imparted in every scene in the film, and the result is some truly outstanding widescreen compositions. I could give you several examples of how Bava brought this story up a notch by his staging and lighting, but the main one I will use is what he does with the Vikings' subterranean main hall. Bava turns it into a phantasmagorical realm set next to the roots of a giant tree--the set is more expressive and emotionally stimulating than most of the cast.

Arrow Video has released ERIK THE CONQUEROR on Region A Blu-ray with a brand new 2K restoration of the film from the original camera negative. ERIK THE CONQUEROR was released on DVD by Anchor Bay a few years ago, and I've always thought that version looked pretty good--but this Blu-ray blows it out of the water. This disc features rich, saturated colors and increased detail throughout the film. It's a stunning display, and a prime showcase for Bava's artistry.

This Blu-ray has Italian and English mono audio and newly translated English subtitles. Bava biographer Tim Lucas has revised his audio commentary that was presented on the Anchor Bay ERIK THE CONQUEROR DVD and it is featured here. Lucas does his typically excellent job, and he works in snippets of an interview he conducted with Cameron Mitchell (the entire interview is provided on the disc as a separate extra). A 24-page booklet is included, with a number of stills from the film and an essay on the production by Kat Ellinger. The author makes the case that Bava's forays into the peplum genre have very much in common with his more renowned horror films.

Another fine extra is a short featurette from Michael Mackenzie detailing the similarities between THE VIKINGS and ERIK THE CONQUEROR. The disc package features a reversible sleeve with art from Graham Humphreys--one side uses the Italian title of the film: GLI INVASORI.

I've highly complimented every disc I've bought from Arrow Video, and that is because they are deserving of such praise. ERIK THE CONQUEROR isn't BLACK SUNDAY, or PLANET OF THE VAMPIRES, but this Blu-ray is a must-buy for anyone who admires the visual brilliance of Mario Bava.
Posted by Dan Day, Jr. at 2:13 PM