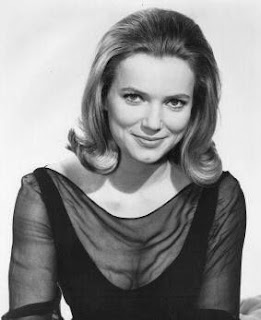 In the last twelve months three women associated with Hammer Films have passed away--Valerie Gaunt, Yvonne Monlaur, and Jennifer Daniel. Unfortunately another must be added to the list: Suzan Farmer. The English actress appeared in four films for the company--THE CRIMSON BLADE, THE DEVIL-SHIP PIRATES, DRACULA, PRINCE OF DARKNESS, and RASPUTIN, THE MAD MONK. She also starred in American-International's 1965 H.P. Lovecraft adaptation DIE, MONSTER, DIE!, with Boris Karloff and Nick Adams.

Suzan's genre roles were all basically similar--a pretty young girl menaced by strange and dark forces. These parts may not have been very substantial, but Farmer brought a fresh-faced innocence to them that made her a perfect damsel in distress. She was the subject of Christopher Lee's sinister designs in three different films, most memorably in DRACULA, PRINCE OF DARKNESS. The scene where Lee's Count tries to initiate Suzan's Diana Kent into the habits of the undead is a major Hammer highlight.

I've always had a fondness for DIE, MONSTER, DIE!, mostly because I first saw it on Svengoolie's show back in the 1980s (when Sven was known as the Son of Svengoolie). It's not a great film, but it's perfect example of a Saturday afternoon monster flick. In her other genre roles Farmer looked fantastic in period costume, but DIE, MONSTER, DIE! allowed her to wear a more normal, contemporary wardrobe. She plays something of the equivalent of a Marilyn Munster role, since she's the daughter of Boris Karloff and Freda Jackson (how did those two have an offspring that looked like Suzan?). Farmer's beauty and nice girl attitude made her stick out like a sore thumb among the dour surroundings of this movie.

Most of Farmer's acting career mostly consisted of appearances on British TV in the 1960s and 1970s (I don't think she would have fit in very well with the more explicit Hammer productions made in the early Seventies). She had stayed out of the public eye for a long time, but she did participate in an audio commentary for an Anchor Bay DVD of DRACULA, PRINCE OF DARKNESS, along with her co-stars Christopher Lee, Barbara Shelley, and Francis Matthews. (The commentary is also available on the Millennium Blu-ray of DPOD.) Farmer was definitely the quietest one of the quartet, but she seemed to enjoy the experience.

I don't particularly relish writing these posts on the passing of Hammer performers--I hope this is the last one I have to do for a while. This does make me treasure even more the encounters I have had with some of the Hammer ladies over the years.
Posted by Dan Day, Jr. at 11:33 AM